You Are Not Your Identity Politics

You will have to excuse me, as this is a sort of late night post of a thought I could not excise from brain. Identity politics has become a sort of catch-all for victimhood status, the sacred cow of SJWs around the world. Whatever your identities are, they comprise the whole of your person. Blacks must always be victims of policemen. Women must always be oppressed by the patriarchy. Hispanics are always victims of whites. Whites are always racist.

Recently, an individual ranted at length on Facebook about how food is racist, classist, etc. and ad nauseam. Food, you see, is cultural appropriation. If you are Chinese, then it is safe for you to eat Chinese food. But beware, whitey, if you dare to order takeout lo mein. All of these are in-born attributes, according to the SJW. Another SJW became cross with a white guy who dared to wear dreadlocks. Everything from your diet, to your hairstyle, to your political views, to how society treats you, is pre-ordained by your race, religion, nationality, disabilities (or lack thereof), etc…

It’s so limiting. I couldn’t imagine living that way. Ethnically, I’m part English and part Armenian. Amusingly enough, I loathe most of the food from both countries. I’m 100% American, and very Southern, mostly because my father’s family has been lurking around Virginia since the first boat to Jamestown showed up (that’d be the English side, by the way – so far as I know, no Armenians were on that boat). But my years in California destroyed any sense of Southern propriety I had — I’m almost as vulgar and impolite as Donald Trump himself. Also, I’m Christian, and still in search of a church to call my spiritual home.

But these things are facets of me. They are pieces of a larger whole. Details, as it were. They aren’t unimportant, mind you, but a person is more than the sum of various identity groups. Ironically, SJWs deny this, despite all of their rhetoric about how important feelings are, and how terrible it is to be stereotyped. In the end, group membership is what matters most to them. A man may not have an opinion on feminism that is outside the bounds allowed to him. To do otherwise is “mansplaining.” Rinse and repeat for racism, homophobia, islamophobia, etc. and so on.

I do, say, and think as seems appropriate to me.

Extend this out to yourself, dear reader. I don’t know most of you personally. You might be white or black, Christian or Atheist, and so on and so forth. But these attributes are matters of the flesh. The soul is greater than that, or at least it has the potential to be. I’m no “diversity” advocate, mind you, but I genuinely wish for the peoples of the world to live in peace as best they are able.

You can’t take individual responsibility if you don’t think of yourself as an individual in the first place, and that’s what is so sinister about the actions of SJWs and other radical Leftists. All that is bad is someone else’s fault, they tell you, and it feels good and freeing for a time. But they seldom admit the corollary: freeing yourself of responsibility is itself a form of slavery.

When TrigglyPuff’s lecture material on “fat liberation” hit me, my first instinct was to say “stop liberating donuts and you’ll be fine.” But that implies that you are an individual who can change your own circumstances, that you have freedom to change your own behavior, your own identity. You didn’t have to be a fat woman. In her worldview, fatness was a fixed thing. She felt like she could not change it, she was wrapped up in her identity as a fat person. If she was no longer fat, she likely figured, she would no longer be her. 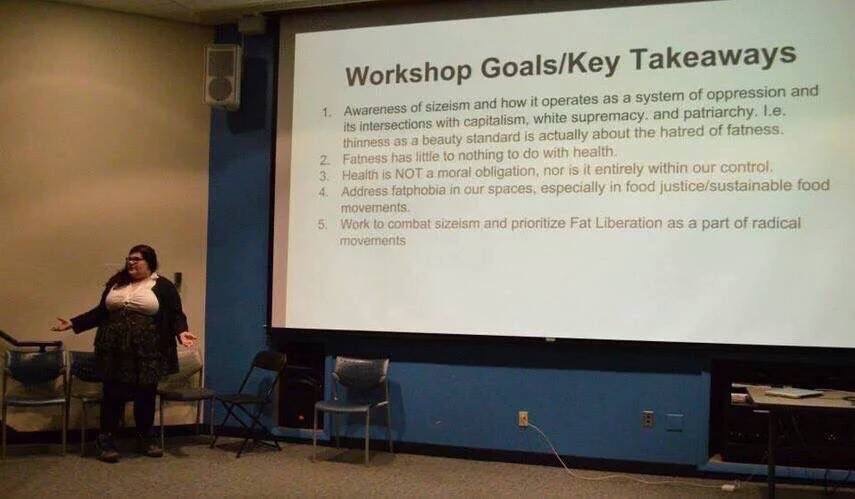 They act like “liberation” isn’t possible by diet and exercise. It’s all about calories burned versus calories eaten. Change the balance enough and you WILL lose weight. It isn’t always easy for folks, but it is a simple formula.

Race is not so easily changed as fatness. But even there, the individual has control over many things. If blacks have a stereotype for increased likelihood for criminal behavior, you don’t have make that an identity. Don’t be a criminal, and none of that will apply to you. Rather than rant and rave that a stereotype exists, just go on about your life and prove them wrong about you.

Imagine for a moment that Black Lives Matter mourned the death of black soldiers and black policemen instead of blacks with long criminal records. How much more support and sympathy would they receive for that? I would be there with them, in fact, if this was their purpose. But this goes against identity politics. The black Supreme Court Justice Clarence Thomas is spurned, the black economist Thomas Sowell is hated. Why? Because they don’t conform to the group identity. Great men are shunned. Losers are elevated in their place.

I remember a video where a black woman was angry at her fellow black college students because they constantly accused her of “talking white” since she refused to go around spouting off ebonics, and acted like the educated woman she wanted to be. Her detractors weren’t whites. They were other blacks who were angry at her for spurning her group identity! It was a very sad thing to see. To SJWs you are no more than your identities. You can never leave the reservation they have assigned for you.

SJWs have a saying: “stay in your own lane.” It encompasses this line of thinking perfectly.

I’m not saying all of these things are irrelevant. We know that genders, ethnicities, religion, and a host of other factors have real, measurable impacts in life, at least at a general level. We know, for example, that blacks are more likely to be pro basketball players than Chinese folks, simply because blacks are taller. But don’t let SJWs pigeonhole you into a box and force you to stay there. You’re more than that. You are a thinking human being, with a soul of your own. Your various group identities are only pieces of a greater whole. Don’t stay in your lane. Do better.