You are a Slave

Freedom is an elusive concept, a word tossed around almost reflexively. It is America’s mantra, its eternal calling, echoed down the ages since the Revolutionary War, and perhaps even earlier than that. Those pioneers were a hardy folk, hardened by a journey on leaking, rat-infested ships, carving out a life on a continent that was unwelcoming to them. 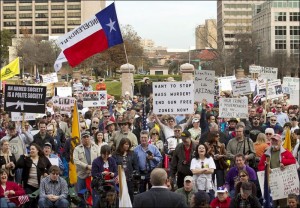 Rah Rah! ‘Murica! Freedom! Hamburgers! You know, it used to be when politicians did something really bad, they were tarred, feathered and run out of town. Now we just cart around signs and complain loudly for a few hours.

Many of them fled oppressive regimes at home, looking to practice whatever strange religious beliefs they brought with them. Others, I suspect, just wanted the opportunity to escape. One cannot forget the role of the Native Americans either, in the formation of this uniquely American obsession. On the frontier between the settlers and the tribes, ideas and genes flowed back and forth across that ever-moving line. Certainly the Native Americans believed in their freedom to roam as they would, something that had been missing from European civilization for several centuries.

Whatever its origins, Freedom meant something very different in that age. It is hard to imagine a rough settler, with his half-native mother, and hands covered in permanent grime, ever asking permission from some distant authority to put a roof on his home, or carry around his decade-old, half-rusted rifle. Neither did he expect any particular help from that quarter, except to tell him when war had come to his country and call him forth to defend it.

Would you fuck with this man? Would you tell him to fill out a form to plant a tree in his yard? I imagine Custer said something like that. To say it did’t end well for Custer is an understatement.

Freedom to that man was sovereignty. In his affairs, on his lands, he answered to no one. Even in his community, affairs were typically run by loosely-formed legislative bodies that met whenever something grave enough motivated them to travel from their distant estates into what passed for a town in those days.

Freedom today is described as a right to say this thing, or travel to that destination without molestation. It is even described as a right to food, shelter and healthcare. Some go further and suggest freedom is the government imposing quotas on hiring practices. I fail to see the connection, but I’m probably just a racist, misogynist homophobe, or whatever new insult people have crafted to try and silence anyone who disagrees with mainstream political thought.

Whatever. This isn’t freedom, this is your parents saying “you’re allowed to play outside for a little while.” While that’s better than the abusive asshole who says his kid can never come out and play, it’s still not free by any stretch of the word.

In the modern era, America is described as free even though for almost everything we must ask permission. To carry a weapon with which to defend yourself you must ask the government to let you do it. When you love someone and want to marry them, you must get a license, you must ask permission. You need permits to work on your own home, which is really jumping the shark. The government may fine you for a myriad of small offenses, a list that is so long as to defy comprehension. Maybe you parked half an inch over the line, or God forbid, you brought fruit into California. In Texas there is a town that banned inflatable gorillas. In Glendale, California pets must be referred to as “companions” in all documentation. 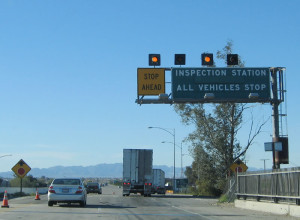 The California border, home to the Fruit Nazis. Yes, every vehicle entering California will be asked if they are carrying fruit. What’s funny is one inspector once referred to it as “contraband.” Really? I felt like tossing a cantaloupe at his face.

In my own neighborhood, there is a government inspector who travels down the street to ensure my lawn and garden plants are only being watered at a specific time, on a specified day. I suppose everyone needs their own personal yard Nazi to say “no water for you!” Next time he drives by I think I’m going to spray his car. Hey, it’s between the appropriate hours. The water Nazis can stick their thumb up their ass and spin. 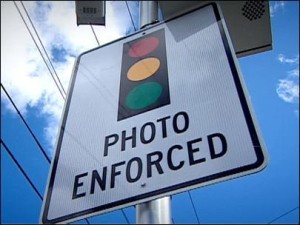 Because money. Plain and simple. Do you really think this is about safety? If they were really getting hard-ons for safety on the roads they would ban motorcycles. More people die on those than in red light violations — not that I want them doing that either.

There is a government central bank tossing around so much money it would have made the Founders sick just to imagine it. The financial system is so obfuscated that, even when you are within it, the thing is nearly impossible to make sense of. Fractional Reserve banking is, perhaps, the most pervasive fraud ever perpetuated on a people, and nobody seems to even notice.

Great corporations span the globe, agents of government spying, working with it to monitor your communications. Cameras are everywhere, from intersections to toll booths and cop cars, recording where you go. Your purchasing habits and income are monitored by financial agencies around the globe. 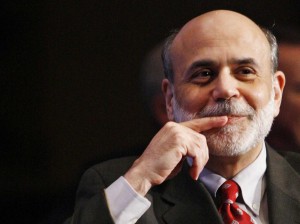 Do you know why he is smiling? He just gave a great big pile of free money to the government and the big banks, who will then loan it to you (with interest, of course). If anyone thinks this is Capitalism, or even intelligent, I have some great oceanfront property in Vegas you might like.

It is so pervasive, so insidious, I simply cannot understand how any man alive can say America is free. Yes, I am allowed to post this blog entry, and that is an improvement over not being able to do so, but that’s one of a select few freedoms that remain to us.

America is not Free. America is a police state, a socialist-corporatist oligarchy. A nation of proles ruled by an aristocracy that can access anything about your life. And though they permit us some rights, we live day-by-day on their sufferance. Every day that sufferance grows smaller. The aristocracy and the political class want to take more Freedom away from you, in the name of safety, security and a myriad of other excuses.

Good question. A better one might be when did these guys start patting down old ladies in airports, looking for Taliban bombs in their diuretics. I mean, I know Taco Bell can produce some noxious fumes in senior citizens, but this is fucking ridiculous.

We are slaves. We are not Free. America is not the greatest country on Earth. Lastly, the West is dying, it’s culture evolving from the works of Mozart and Da Vinci to Kanye West and dropping crosses in jars of piss only to call it art.

Sure, this is melodramatic, full of rhetoric and metaphor. It is also true. I love my country, its history and the synthesis of various cultures that produced it, from the Dutch colonies in New England to the English explorers led by my own ancestor, Sir Walter Raleigh, to the Native Americans who are still among us and the Spanish who had been here a generation before any Englishman set foot on this continent. Out of that motley collection of peoples came a nation that, for a short moment in human history, valued freedom so much that it fought one of the most bloody civil wars in history to finally extend it to ALL peoples in its borders. 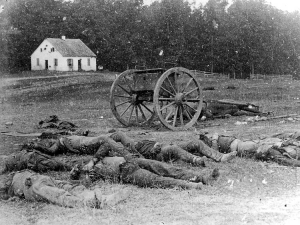 These people died to free Blacks from slavery. This check was paid in blood and treasure 150 years ago. Anyone who says otherwise should jump into a time machine and explain to Generals Sherman and Grant that they have a problem with the payment.

But those people are dead. It’s just you, dear reader, and I. Flip on the radio and listen to the lyrics of one of today’s pop hits:

Realize that this is more popular and well known than any government regulation or surveillance program.

Don’t be a slave any more.