Just a quickie for today. Over at Sarah’s place, I read this little gem:

Look, it’s not my fault.  I was bit by International Socialism as a child and it’s the sort of thing that causes an allergy for life.  Oh, yeah, and International ANYTHING day is a socialist thing, because they never fully realized that they didn’t control the whole world.  Or they didn’t care and just wanted to make their rubes believe they were worldwide.  The Happy People of Brutopia celebrated whatever day they were ordered, and they marched in orderly ranks past the red draped stands, and Socialism would Conquer the WORLD.

Right.  So that was part of why I blew up.  I hate “International” this and that, and the idea behind it.  Whatever good it is supposed to do never actually works where needed, and it does very bad things everywhere else.

It’s true. International (insert thing here) is almost invariably a Socialism thing. If there was an International Shoe Shiner’s Day, I’d presume the shoe shiners in question were probably Commies. Workers of the World Unite! That’s the rallying cry. Only, since the Frankfurt school popularized the idea of scapegoating various demographic groups as privileged, or whatever, they now have more flexibility in slogan generation.

Whatever. Leftist agitprop has become functionally retarded. I can’t believe people still legitimately fall for this bullshit. But RadFems are full of contradictions. Observe: 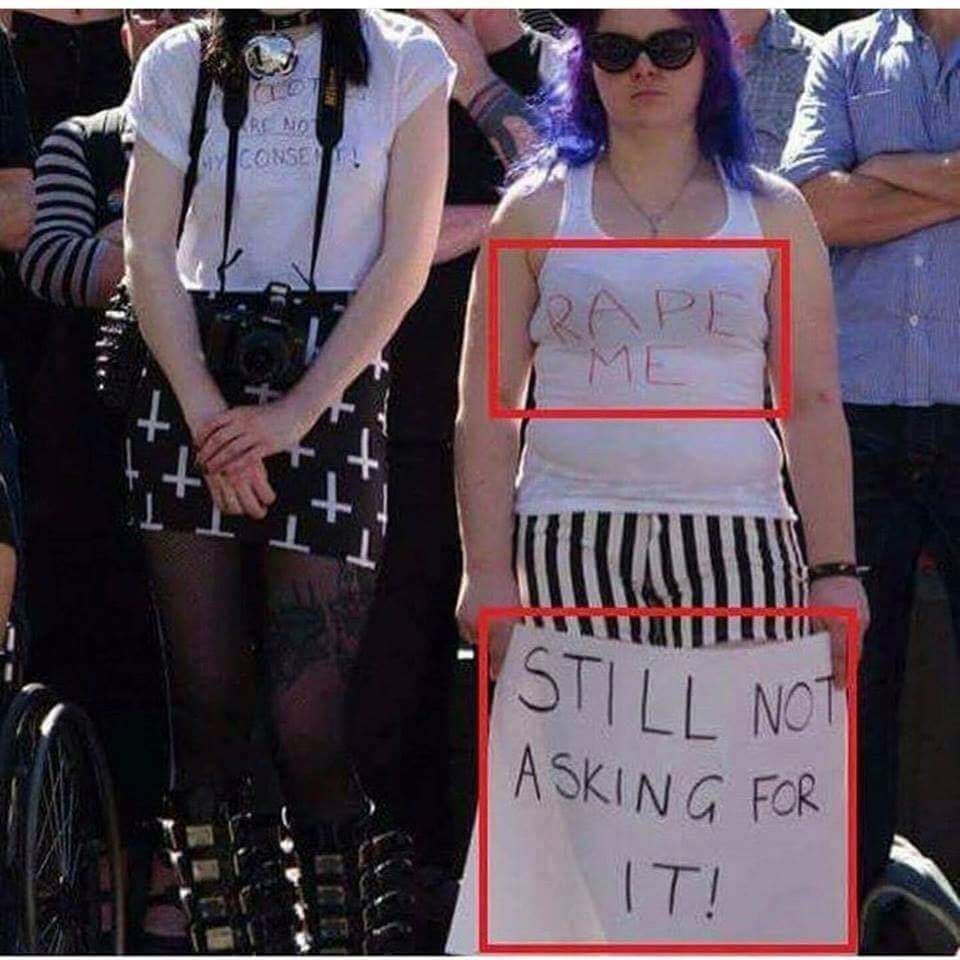 Yeah… I got nothing.

RadFems are all up in arms when a man holds open a door, or for whatever reason (probably blindness), when he shows any kind of sexual interest in them. But they are silent about Islamic oppression of women. Yes, I know, it’s a tired cliche. Us rightists always talk about Islam when RadFems start complaining about this or that. But it’s true.

I’ve spoken at length about the darker side of the feminist psyche, how they actually crave oppression. Just not, it should be noted, from you. The barbarian bad boys outside the gate are much more interesting, I suppose. That’s why Islam gets a pass, and why the nastiest, most violent assholes in the club walk away with swooning feminists, arm-in-arm, dedicated fighters of the patriarchy taking a break by letting some thug have his way with them.

In essence, the woman above is asking for it. Just not, it should be noted, from you. Where’s her romantic migrant-in-whatever-jihadis-wear to enslave her and honor-kill her?

International Socialism is full of such contradictions. The Progressive stack is confused about who is the greater victim, the white woman, or the black gay man? What if the woman is a Muslim, or the black man of Hispanic descent? These are the great conundrums of the left, the questions that burn in their psyches, underneath layers of pink pussy hats.

A Day Without Women, they said. No, no. There are plenty of women. I imagine Sarah Hoyt kept on writing, and, of course, my wife cooked up some good buffalo wings for dinner yesterday. My friend, who is an MD, went to work, same as always, caring for her patients (I imagine many of them were women, also). No, it wasn’t a day without women. It was a day without Socialist RadFems. Society did not crumble, we didn’t lose power, starve to death, or suffer great tragedy. The bulk of America hardly even noticed their absence. And, to be frank, I wish we had more days like that.