One thing is clear to me, and it’s more or less the only thing with such clarity, we’re approaching a strange sort of historical nexus point. I wonder if this is how folks in Europe felt in the days leading up to the death of Archduke Franz Ferdinand. It’s not just in America, for Brexit and the various secession movements in Europe show us that the old order is breaking down.

With the collapse of the Soviet Union, the sort of post-World War II geopolitical stability evaporated. The Cold War had a certain consistency to it. It was a game with rules, perpetuated by rival Empires with no interest in actually going to war. Neither state was under the illusion that it was invincible.

Today listening to Democrats talking about how Russia would be an easy rollover if Hillary was in office… I don’t even know what to say to that except to note that everyone else in history who thought that wound up on the losing side except for, perhaps, Genghis Khan.

No, I don’t worship Russian military prowess, mind you. I’m not really qualified to comment on that anyway. But Russia is locally ascendant and remains one of the strongest Great Powers. Trying to defeat them in their own backyard would be idiotic and, in any event, not worth the lives expended on the endeavor, regardless of the outcome.

For Democrats to agitate for war against Russia is one of the most bizarre reversals I’ve ever seen in American politics. They wanted to surrender to Russia only a few decades ago. But it is not only in this that American politics have mutated into absurdity.

Legislation of morality used to be a feature of radicals on the Right.  You would have people saying that video games were the work of Satan, or some such. And most of us more reasonable Right-wingers would point and laugh at them. Fortunately, most Conservatives grew out of this nonsense, but now the Left has embraced it instead. Video games are sexist, or racist, or some such. SocJus is the Religion of the Left, and it tolerates no competitors (except Islam).

The Left took the worst features of the Right — the ones we were usually embarrassed about, like moral puritanism and armchair generalship, and grafted them onto the Left, creating a political Frankenstein’s monster. That is what Hillary Clinton is running under. Maximum stupidity and willful delusion.

Political normalcy has been defenestrated. I see dedicated Right-wing intellectuals going Hillary, and rank-and-file Lefties going Trump. I see massive enthusiasm for Trump, and little for Hillary… but also a firestorm of hate for Trump in the higher circles. Polls are widely split and seem to have little correlation with reality. I don’t trust any of them, regardless of whom they claim will win. Between Wikileaks, and the finally-open propagandizing from the media, almost anything is possible at this point.

You could have anything from an unforeseen Trump landslide, along the lines of the unpredictability of Brexit, to a Hillary mandate which controls the entire Federal Government at all levels. This is not business as usual. There could be violence unseen in any election in historical memory, or the whole thing could go down with a whimper, and no bang. 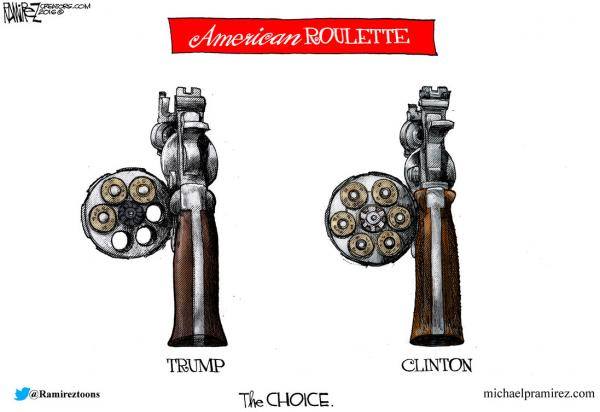 And if Trump wins, he could turn out to be just as bad as Hillary, or do what he’s saying and drain the swamp and shake up the political alignments even further. One of my friends is worried that Trump would actually govern from the Left and not the Right, and I suppose that is possible too.

I literally have no idea, and don’t really trust anyone who says that he does know. The only thing I know for certain is that Hillary represents the end. If she gets that mandate, we’re heading to the same toilet bowl Venezuela finds itself swirling in.

So I’ll vote for the revolver with three bullets instead of six. But I really have no idea which one the American voters are going to hand us.