Francis, over at Libery’s Torch, touches upon a very important topic in America, that frequently gets overlooked: treason. I will allow him to explain for us:

Isabel Paterson noted the treason clause, in combination with the Constitution’s prohibition of bills of attainder and “corruption of blood,” as supremely important protections for the lives and property rights of Americans. Understanding this requires knowledge of how charges of treason were used by monarchies to destroy those who opposed the king. For all practical purposes, if the king charged you with treason, you were automatically guilty – and no one dared object, for reasons that should be obvious. “Corruption of blood,” another monarchical practice banned by the Constitution, extended the penalty from the accused to his family: it “justified” the attainting of the accused’s relatives, seizure of all family property, and in some cases the enslavement of all family members.

But these provisions, though critical to attaining a grasp of the mindset of the Founding Fathers, are of less interesttoday than the three words “War,” “Aid,” and “Comfort.”

Yes, Gentle Reader, those specific words are of vital importance to us today: the twentieth of June in the year of Our Lord 2016. There are several reasons, but the one I have in mind at the moment is Islam.

Now the interesting thing here is that Francis immediately brings up Islam. And he is not wrong to do so. Those who give Aid and Comfort to our Islamic terror enemies are among us. They are in our government. They are among the civilian population, also. Members of Omar’s family had reason to believe he was planning an attack, and did nothing. Are they traitors, then? A Court of Law should decide this, but certainly they should be charged. It appears his wife will be charged with accessory to murder, but this is too small a thing.

Our political leaders lie about terror attacks, most notably Hillary lying about Benghazi. Is this treasonous, via Aid and Comfort to the enemy? Again, quite possibly. She should have been charged.

But it goes beyond Islam. While Francis does an excellent job of laying out the case for those who support Islamic terror, what of those La Raza supporting Mexican immigrants (legal and illegal) who have been spotted at Trump rallies assaulting American citizens, burning the American flag, and then holding up signs saying “Make America Mexico Again”? They are, in effect, demanding that America cede the Southwestern states to Mexico.

We are not at war with Mexico, yet Mexico sends us millions of people through illegal channels. In normal times, this would be called an invasion. It would be grounds for war. If millions of Americans illegally crossed into Mexico, certainly the international community would condemn it as a warlike act. Are those within the government that support this via aid and succor treasonous? I don’t know the jurisprudence to make such a decision, naturally, but I do suggest that this should be investigated. If they are illegal immigrants, the decision is simple: deport them. They are active agents of chaos and destruction and have no right to be here. If they are legal immigrant citizens, then the charge of treason should be investigated. They have violated their oaths. 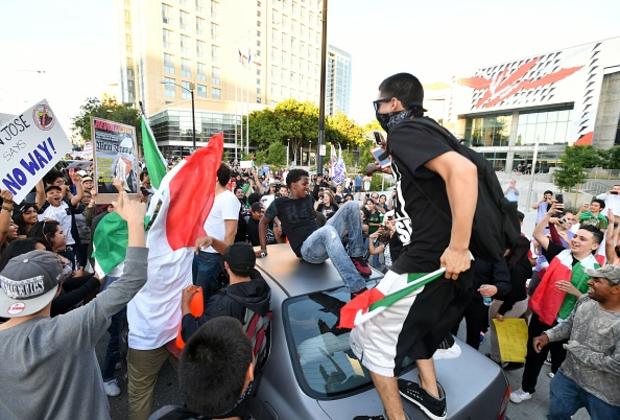 Are these traitors? If they are illegal, then no, they have taken no oaths — but they must be deported. If they have taken an oath, then consider the possibility that they have violated their oath.

Now, naturally, I have no issue with those legal immigrant citizens who are good American citizens, and do not demand that America be given over to Mexico, or make claims of racial superiority over Americans (La Raza does this). They are most welcome. And for their part, I have seen several Americans of Mexican ethnicity fighting back against these people. But those among them who make demands like these have violated the oaths taken to the United States. Is it treasonous, or do we account it merely as a voluntary renunciation of citizenship via the violation of their stated oath? I don’t know. But again, the matter must seriously be considered. Otherwise the oaths taken to become a citizen of the United States of America are effectively worthless.

These are serious matters. Like Francis, I do not invoke the charge of treason lightly. But what else can the definition have, if not to deliver America and her citizens unto her enemies?