What Does “Legally Present” Mean?

As far as Medicaid/Medicare/Obamacare eligibility?

I found out these little tidbits when pursuing AHIP Certification (needed to provide Medicare/Medicaid insurance to my customers).

Lawfully present immigrants are eligible for coverage through the Health Insurance Marketplace.

The term “lawfully present” includes immigrants who have:

Immigrants with the following statuses qualify to use the Marketplace:

Applicants for any of these statuses qualify to use the Marketplace:

Applicants for asylum are eligible for Marketplace coverage only if they’ve been granted employment authorization or are under the age of 14 and have had an application pending for at least 180 days.

People with the following statuses and who have employment authorization qualify for the Marketplace:

Did you see that part about DACA recipients NOT being eligible for Obamacare?

Well, that’s technically correct. What that page DOESN’T tell you is that some of the states allow DACA recipients to get Medicaid – which is a program funded by the Federal Government to assist states in paying for poor citizens.

Which, the DACA peeps are not. Citizens, that is.

The DACA “kids” can received prenatal care under the CHIP option – some of the states allow that. Additionally:

Other access to care available to undocumented immigrants and to DACA grantees include limited emergency services paid for by Medicaid, including labor and delivery for childbirth.  Safety net programs that are available to all regardless of immigration status include immunizations, treatment at Community Health Centers and other Federally Qualified Health Centers (FQHCs), Migrant Health Centers, financial assistance or charity care at hospitals, insurance at full cost offered outside the Marketplaces, and employer-sponsored health insurance, if offered. Over 50 percent of DACA grantees became employed at a job that provided health insurance or other benefits; despite DACA termination, their health insurance should remain in effect as long as the employment lasts, after which they can continue insurance through COBRA.  Finally, a number of local jurisdictions provide health services for their residents regardless of immigration status, including some places where many DACA grantees live, e.g.: Los Angeles County, CA; Cook County, IL (includes Chicago); New York City, NY; and Washington, DC.

Here’s the link to where you can access the map below, and stats about the states. 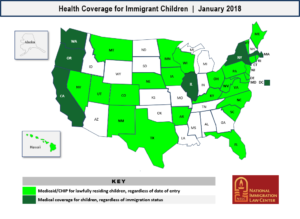 So, the next time you are self-righteously informed that DACA “kids” are ineligible or ACA (Obamacare), you’ll know the FACTS – that, thanks to OTHER programs, this is more of a pebble in the road. Of course, the Left will worm around the system to find some way to qualify their precious Undocumented Voters for the full scope of freebies that the taxpayers will be forced to provide.