What Can We Do?

Mark, a friend of mine, has asked me on occasion what we can do to support Western civilization, how we can defend it from its ideological enemies. For the longest time, I could not answer him. Today, the solution finally hit me.

If you remember the ruckus where Sarah Hoyt and Ace disagreed vehemently on the proper course of action with regards to the treacherous Republican party, you will also remember Ace’s proposed solution. Still, it seemed almost knee-jerk, even if I agreed strongly with it.

The logic is simple. When a Progressive proposes something loony, like a $15 minimum wage,  do not counter with a rational argument against it, for that is rudely dismissed by the Left as racist, sexist, classist or what have you. Instead, ask them why it should not be $50 an hour, or $100 an hour. Do this seriously, not sarcastically. Masquerade as one of them and frame it in their emotional style. What, do you want the poor to starve? Is it fair that they do not get paid the same? Why should a lawyer drive around in his Rolls while the single mother of color has to work two jobs?

Ace’s intent is to accelerate the inevitable economic reckoning that we all know is coming. A collapse is inevitable by this point, but we wish to quicken its arrival, so we can shorten the period that follows and minimize the damage it causes.

It occurred to me today that there is another, perhaps more important reason for doing this. The Achilles heel of ideological subversion is a tendency to subvert itself once its enemies have been consumed. We’ve all seen it. It is almost axiomatic, like a scene from the Lost in Space movie remake: the Left eat their wounded. They are prone to ideological cannibalism. The way forward is clear: pretend defeat and watch our enemies destroy themselves.

By letting them think the Evil Right Wing Racists have been defeated, the Left will busy themselves with ideological purity. Then the Insufficiently Left will become the new class enemies. The Bourgeois give way to the Petty Bourgeois, and thence to the Kulaks. Ideological subversion never ends. Those who wish the minimum wage to be $20 will be denounced as racist and hateful because they do not support a $500 minimum wage. Bakeries which do not provide discounts on cakes for gays will be evil capitalist oppressors. The alliance of Radical Islam and Militant Leftism will fall apart. Those who do not support a tax on white skin will be seen as racist. Questioning slavery reparation payments will be seen as morally equivalent to the KKK. Increasingly radicalized components of the Left will subvert their less-insane counterparts, just as they have done to us.

In many ways, #GamerGate is evidence that this tactic can work. Most of #GamerGate’s supporters are actually relatively Left leaning. But they are the Insufficiently Left, and have now been attacked by their own erstwhile compatriots. We want to encourage this further, to fracture the Left by denying them the Evil Right Wing Boogeyman to unify against. Our people can easily wear the uniforms of the enemy, as it were, and encourage more fracturing by pretending to be the most ardent Social Justice Warriors, policing for ideological purity.

I mean it. Start an account on Social Media masquerading as a Progressive. Feign acceptance of the most extreme brands of Leftism. Establish a persona and police the SJWs for instances of racism, sexism, etc. It will not be difficult to find, since many of them actually are closet racists and misogynists. Frame your arguments emotionally. Stir the pot and watch them consume themselves. Invade their “safe spaces” and encourage their self-destruction. Wear the uniform of the enemy wherever you find him, and then embarrass him.

We must feign defeat. Through that, we will achieve victory.

It also makes me wonder if the Communists were truly defeated in the 80s and early 90s. Is it possible they have done to us what I now propose to do to them? 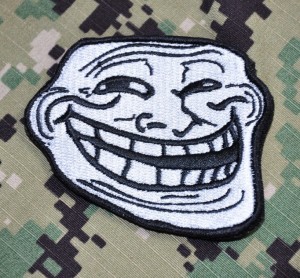 Join the Troll Army Today. Find the enemy and embarrass him. Let none escape the wrath of their own kind.