My own story about home ownership is instructive in how toxic debt can be, and how it can be used to control your decision-making. That the elites in America, and all over the Western world, use this to manage your behavior is something that is pretty well documented elsewhere. Zerohedge tells us today that the wealthy avoid mortgage debt like the plague, and generally put their money into business, or other income-producing assets.

The thing is, this wasn’t always the case. Conventional wisdom, before the 2008 meltdown, told us that buying was generally better than renting and pissing your money away. And there was a time when that was at least partially true. In the times following World War II, communities were still intact and if you bought a home, the probability that it would suddenly become worthless was low. So making payments and slowly reducing the debt-load may have still been dangerous, but it was less risky than today.

After the Civil Rights era, of course, real estate agents figured out that there was big money to be had in block-busting in the name of desegregation. The salesmen could pretend to be virtuous agents of racial equality while simultaneously earning big paychecks. If you didn’t cash out quickly enough, your home was effectively worthless. The legacy of this, of course, is entire swaths of major cities that are ethnic ghettos. I leave it to my readers to determine whether or not any of this helped the cause of racial integration.

Destroit (I kept this typo, I liked it) serves as a case in point: 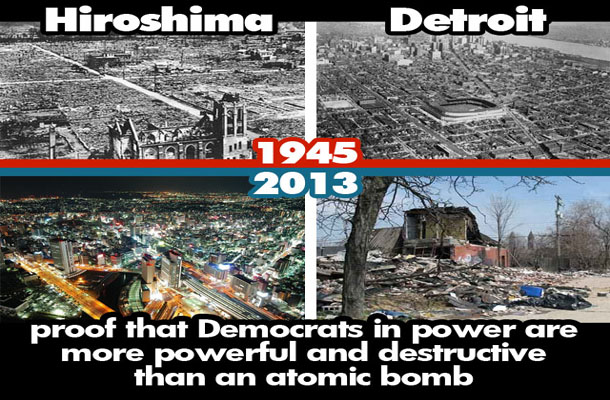 Block-busting, decades of mismanagement, and racial tensions stoked to maximum resulted in something marginally worse than a nuclear weapon.

Keynesians would love to institute negative interest rates and force everyone onto a cashless economy today, because then there would be even more ways to force you into debt. If, for example, all money was held at a bank because it was electronic, and couldn’t be otherwise, they could institute a negative interest rate on your savings and, essentially, force you to spend your money or lose it. Without a cashless economy, people would just stuff the bills in their mattresses. At the same time, they would offer “0% APR” loans with increasing quantity, pocketing the difference against the negative savings rate. This, naturally, would incentivize spending. It’s been a wet dream of Big Government elitists for generations.

But there is something else that is less commonly understood, and that is the relationship between debt and political censorship. It is at the very center of what the elitists are trying to do. Their SJW patsies are, of course, the designated attack dogs.

Consider my own recent case. Yes, I apologize for harping on it excessively, but I do prefer to use practical examples where possible. So someone doxxes you and starts making threats to your livelihood. They will tell your clients, or employer, or friends, family, etc… that you are a big meanie poopy-head Republican, and you say things they don’t like. Whatever.

Point is, if you are debt free, your expenses will be low. You will have to eat, and pay the usual bills. But these can be managed. You can eat a little less, conserve electricity and water, etc… They are at least partially in your control. But what about a car payment? What about a mortgage? What about the credit card payments and installment loans?

That’s a very different kettle of fish. You might be able to juggle some things around for awhile by being creative. But soon you are facing a wall which cannot be moved. You will lose your home, car, possessions and ruin your credit such that you cannot get these things again for a long time. Your family could be ruined with comparative ease.

How quickly would the average person correct their wrongthink and toe the party line? Or, at the very least, self-moderate their own positions to stay within the increasingly-narrow Overton window of the Left? Indeed, this has consistently been one of the most powerful weapons in the SJW arsenal, because they naturally subvert institutions and HR departments to put their men (or transsexual otherkin) into these positions. So help will not be forthcoming from these avenues. You cannot appeal, because the Court of Public Opinion answers to no higher court. And defending yourself is proof of guilt. Kakfa-trapping has been the preferred weapon of statists since the dawn of civilization.

But let’s try the same situation when you are debt-free. You own a small piece of property with some dilapidated old house. You have a beater car, a modest lifestyle, and considerable savings. When the SJWs come for you, you will laugh in their face. You could flip burgers and still afford to pay the bills. You could live for years off your stored savings.

Consider those like Vox and Mike Cernovich who are antifragile in this respect. They gain money and notoriety from SJW attacks. I wouldn’t know of either of these guys were it not for the constant attacks on them. The Progressives themselves elevated these figures to high visibility, not me.

Either way, whether a hard target approach or an antifragile approach, the SJWs will be unable to control you if you are debt-free.

I’ve been working for years to correct my earlier mistakes in life and purge remaining debt. I have a mortgage, still, on my one remaining property. Almost all of my extra money has been going into either savings, or paying this mortgage down. When it is done, I will be invulnerable to SJW assault.

Even now, I have made sure to court multiple income streams. The SJW found my DJ business and attacked that, but my other income channels are unaffected. Some of them are invulnerable to ideological attack by their very nature.

But only when I have no debt will I be free. Roman slaves used to have to buy their own freedom. And I’m starting to think that historians will think likewise of us. Our debt-peonage can be lifelong, or it can be bought out. And purchasing your own freedom is worth so much more than a shiny new Mercedes-Benz, or a house in the ritzy neighborhoods.

Francis made a good point the other day:

Everything you say here is true, Dys. To me the message is clear:It’s time to go on the attack. There are ways to do this that vary with individual circumstances. The central thing is to attack rather than defend, to advance rather than retreat. It always takes a bully by surprise — and 99% of them fold when thus confronted.

Trust in God and fear no man.

Being debt free is like creating a good rear guard to cover you. We’re in a Culture War, and the enemy has wizened up and attacked our supply lines, quite literally if you think about it. Secure your lines, and then go on the offensive. Expunge your debt. Sell off what you don’t need. Pay off the rest.

And then the only weapon the SJWs ever had against you will be rendered useless.