Weaponized Empathy – Coming Soon to an Illegal Alien Near You

With the fight surrounding Trump’s 90-day travel ban from certain Muslim countries in full swing, public attention is, for the moment, rather distracted. But from the #NoBanNoWall hashtag, we can infer that the Left hasn’t forgotten about the illegal immigration invasion, and can be expected to mobilize its full resources in defense of the practice.

One of my detractors once explained to me that we don’t really need a wall, and that Democrats have been very much in favor of securing the border through other means. That, of course, is a blatant lie. At any time, Democrats could have reached across the aisle and found, if not robust support for securing the border (some Republicans like the cheap labor), at least enough support to make it happen, if they truly desired it.

The only answer that makes sense is that they want illegal immigration to continue. Their defense of the practice went to absurdity during the election. We all remember this little gem:

Most videos of this are focused on Trump. But I like this one, even if it’s of relatively poor quality. Here we can see the reporter’s smug, self-satisfied air of superiority, as if he is the great arbiter of moral authority. The press has grown too big for its britches. Rather than simply reporting on the news, or even engaging in editorial spin, the press now demands compliance with its dictates.

You better say it this way, or else.

Trump, naturally, declined. And you can almost see the wheels spinning in the reporter’s mind. Time to call him a racist, we warned him it was offensive, so now he’s a racist, and we’ll destroy him. Of course, if Trump had submitted, and spewed the line “American born child of an undocumented immigrant,” a heap of worthless, kludgy Newspeak straight out of Orwell’s book, then the press would have laughed at him, and put out a piece saying “Trump didn’t even know anchor baby was offensive, lololol.”

The only way to win is not to play. Of late, I’ve been convinced that arguing with these people is futile, because their attacks are Kafkan in nature. They are traps, from which there is no escape except abject submission to the Narrative. And, invariably, the attacks will focus on the person, rather than the issue. You are a racist, sexist, homophobe, islamophobe, or whatever. You are stupid, ignorant, and uneducated. You need to educate yourself, but in our manner, and with our books, and with our concepts. Yours, of course, are anathema. Wrongthink. If you study them, you are stupid.

I remember Phil Sandifer, the self-described Marxist Occultist (whatever that’s supposed to be), lecturing me on the need to educate myself. If you’re brave, you can see the utter dreck he writes, trying to interpret old console video games with Marxian dialectic, or trying to defend self-admitted incestual pedophiles because the Right-wing had no regard for Sarah Nyberg’s relative status and fame. Yes, to a Marxist, status within the party trumps any actual crime, and spinning a 16 bit video game as fundamentally Marxian is accounted an intellectual matter of some importance.

It reminds me of a relatively rare book my father-in-law gave me to read once. I was Castro’s Prisoner, by John Martino. In it, we get a first hand account of an American trapped behind the revolution, betrayed by his own government, and left to rot in prison. But the fascinating thing to note from it is that the author described Castro releasing many criminals, people convicted of theft, murder, and other such things. Instead. Castro filled the prisons with political prisoners, like the author. Wrongthink was a great crime, in the minds of Marxists, worse than actual, physical crime.

So we shouldn’t be surprised that they apply this same standard to illegal immigration. To them, the breaking of our laws is a mere trifle. It doesn’t matter at all. I remember when Michael Brown’s theft at a convenience store, not long before his encounter with police, was hand waved away with the statement that “a few cigars isn’t worth a young black man’s life.” Well, clearly Michael Brown thought otherwise. If the Left is okay with the theft and assault, then crossing the border illegally wouldn’t faze them in the slightest.

They want illegals because they are politically useful. Don’t let them fool you about morality or compassion. Perhaps some of the rank-and-file liberals believe this, but the ones calling the shots certainly don’t. For them it is about obtaining political control over America. Mexicans are useful idiots, in their view. There is speculation that as many as 800,000 illegals voted in the last election, though it is unconfirmed at best. But it is known for certain that some illegals did vote. Yet that’s not the primary boon illegals grant to the Left.

Amnesty is the great prize. Ann Coulter put together some rather convincing figures in her book Adios America, in which the 11 million illegals we think are in the country may actually be closer to 20 or 30 million. But whatever the number, once the Left gets amnesty and eventual citizenship past the goal line, there will never be a Right-of-center President in America ever again. They’ve made sure minorities who step off the ideological reservation are branded Uncle Toms, Uncle Changs, and traitors to their race. So the vast majority will be good Socialists, even if they were otherwise inclined.

And on top of that, the political usefulness of decrying anyone who fights illegal immigration as racist has been immense. Opposition can be spun as hatred of Mexicans, racism against brown people (even though many Mexicans are essentially fully Spanish in descent – just look at the Mexican first family). It’s another bludgeon that can be deployed against the Right.

All three things have great utility to the Left. The illegal votes they get today, the greater number of votes they’ll receive if they can push amnesty, and the ability to deploy Weaponized Empathy for the poor, oppressed brown peoples of the world, terribly maligned by white Right-wing racism. 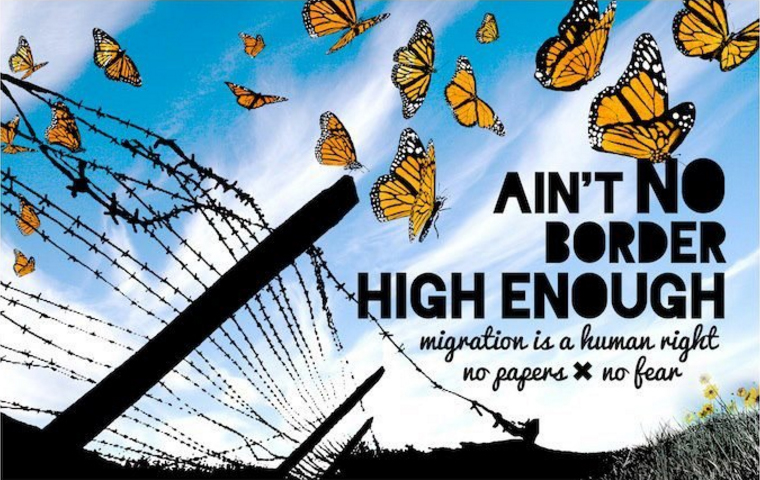 No papers, no fear. And by the way, everybody coming into your country is guaranteed to be a beautiful butterfly. Of course there are no terrorists, no criminals, no extremists, no drug dealers, no welfare moochers… all beautiful butterflies.

Remember, to these people borders are nothing, and jumping them is fine. Laws don’t matter. Only wrongthink matters. No amount of welfare statism, terrorism, drug smuggling, or otherwise is enough to even allow the questioning of this practice.

Migration is a human right? You do mean invasion, don’t you?

You’re going to see a lot more of this propaganda soon. Be ready for it.