Back in preschool daycare, there was a phenomenon I remember which most folks can probably relate to. Tattling was a tactical move which could either confer status upon you, or take it away. Deep down, nobody liked a tattletale, but kids often feared him and pretended to like him when the teachers were around, so as to avoid punishment. There was always a kid who would tattle frequently, even inventing stories out of whole cloth. And the teachers often liked this kid, because it appeared that he made their jobs easier by policing the other kids for them.

Of course, when the teachers were not there to watch, there was an entirely different opinion of the tattletale. An opinion that, frequently enough, turned violent. But even this played into the sanctified victimhood of the tattletale. He thought himself persecuted by the other kids, and this only enhanced his desire for vengeance through the administration. And so many children separated into two groups of deceivers, both of whom pretended to be paragons of virtue in front of authority figures. They were the tattlers and the bullies. But both may be thought of bullies, just one of a more physical sort, and another of a more mental or emotional sort. In the tradition of Lord of the Flies, this feature persists throughout childhood, but ought to be effectively resisted by thinking adults.

Yet here it is, in 2016, and the same two groups persist into the adult world. We see the tattlers in the form of Social Justice Warriors, radical feminists, and other assorted Leftist “intellectuals”. And coextensive with them we find the physical bullies in the form of Black Lives Matter protesters, criminals who use ethnicity as a shield for their behavior, and others of their like. Observe here:

The infantile nature of the Left is fast becoming quite transparent. The emotional bullies become proxy stooges for the Establishment, claiming to be victims of whatever group is currently resisting the activities and desires of the power brokers. It’s funny how many radical feminists claim to be victims of white male violence in some form or another, and yet the group that is most obviously physical in their criminal activities certainly isn’t straight white guys.

As in preschool, a sort of understanding has taken place, wherein the emotional bullies and the physical bullies have, at least for the time being, joined forces to extract as much lunch money from the rest of us as possible. And we cannot go to the authorities, for the stooges have Establishment support. And we cannot fight back effectively without those very same stooges telling on us for daring to have the temerity to resist our fleecing.

In this day and age, the appearance of victimhood has become a coin unto itself.  As long as you can cloak yourself under its protections, you can steal, loot, burn, pillage, and rape, and excuses will be made for your behavior. And so being a “victim” grants prestige and power. Just as us capitalists are inventive in our search for profit, so are these people ever more creative in inventing new methods of gaining victim status.

Browsing around Twitter today, I encountered this picture from @AuditTheMedia: 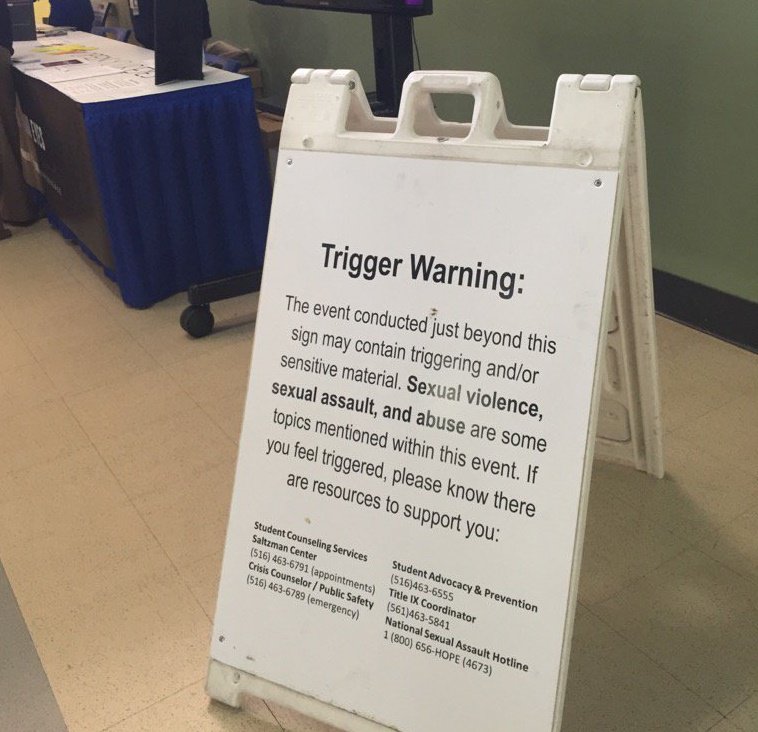 A debate as sexual violence, requiring a trigger warning…

Yes, merely by watching a debate, freely, of your own choosing, you can be granted victim status. Perhaps you will go to the counselor, and the call the sexual assault hotline. You might write a book about your PTSD, and the suffering the evil Trumpites have done to you by merely existing. And then you can go onto social media and call for the death of all white men, and nobody bats an eyelash, because you are a victim and have your ironclad documentation thereof. Bottles of antidepressants, counseling receipts, fake death threats, and sad photographs all serve as proofs. Skin color and genitalia likewise confer benefits. And it is even possible to gain them without having the requisite genitals or skin color. You merely claim transgender status, or pull a stunt like Shaun King, and invent your blackness out of whole cloth.

Anyway, once your proofs are established, you get to exercise power as an agent of the power brokers, like the tattletale in preschool. Did someone look at you funny? Time to tell on them, get the fired from their job, attack their businesses, or whatever. With the rise of the Microaggression concept, anything can be grounds for telling on someone. What constitutes criminal offense is entirely in the hands of the empowered accuser. If necessary, the story may be bolstered by fake death threats, racist text messages sent by their own, or even poop swastikas plastered on a bathroom wall by parties unknown.

Meanwhile the physical bullies have realized that they can exercise the same power, and escape justice, by cloaking their own behavior under the same proofs. If one of their own is punished for his behavior (even in a case of suicide-by-cop), that is merely an excuse for the rest of them to flex their muscle. For now, the two types of bullies have a sort of fragile truce in order to loot the rest of us as efficiently as possible. But supposing we were ever sufficiently impoverished and cowed, they would turn on each other soon enough.

The thing to understand here is that this power is an illusion, and it requires some level of cooperation from the real victims. If an accusation of racism/sexism/whatever wasn’t treated as an automatic guilty verdict by a sufficient number of people, then what power would it hold over you? If a large enough number of Americans didn’t believe every sob story they heard on the nightly news, how could you be guilted into supporting blatant bullying behavior?

In the preschools, there was always one power that could upset the bullies, both of the physical and emotional varieties: standing up to them. If you punched the physical bully in the nose, even if you lost the conflict, you made it expensive enough for him that he would probably stop. And with the tattletales, if the rest of the class presented a united front and challenged him, the teacher had no choice but to accept your victory over the tattler. In the rare case that the tattler was believed over the entire rest of the class, it was possible to bring the parents in and challenge the verdict.

Americans MUST stand up to the bullies of both varieties. And they must do so now, before it is too late. They must bring the cash value of victimhood down to zero. Indeed, we must laugh at the individual who tries to confer victimhood upon himself. Did someone use their genitals as an excuse for failure? Point and laugh. Shame them for this behavior. Did another individual cry because someone disagreed with him? Turn your back on him and ostracize him. Indeed, make the value of this product negative. As with any product in a free market, the consumer retains ultimate power to categorically reject something, and that is what we must do as a people.

Stop rewarding bad behavior, and it will eventually stop.