It never ceases to amaze me just how utterly insane the Social Justice crowd is. It is almost as if they exist in a completely different reality, a dimension where feelings are logic, and logic is hatred. A place where peace is war, and war is peace. Even Orwell couldn’t imagine the level of willing lunacy. Nothing makes sense, everything they spew is directly at odds with reality.

Look at this article. Seriously.

You see, Law & Order SVU, another bit of terrible television that somehow garners good ratings from somebody (I don’t know anyone who watches this show regularly), did an episode on #GamerGate. Full disclosure: I couldn’t watch the whole thing. It was that bad. I suffered through The Notebook, but this was too much.

It wasn’t because I was offended. I knew TV and the media were going to butcher the whole affair terribly. That’s what they do, after all. I was simply unprepared for the level of insanity in the thing.

Ralph helpfully pointed out that Real Gamergate has never sexually assaulted a woman at a gaming convention or, you know, kidnapped and gang-raped anybody. Which is true! That’s great. Great job.

Look at the snark jumping out at the reader. “Great Job for not gang-raping people.” You get the sense that they almost wish the gang rapes, attempted murders and kidnappings present in the show actually happened so they could pin it on their opponents and score moral points from it.

Not everyone Gamergater was so amused, though, seeing a full-scale, SJW-backed media smear campaign:

That’s the interesting part. While it had elements of a smear campaign, it was so horribly executed that it was more funny than scary. The idea that gamer dorks would band together, start a terrorist group, kidnap and gang-rape female developers is utterly insane. These are people who piss their pants just thinking of asking a girl out on a date. As Ralph tells us, it’s utterly laughable.

Gamers are unable to ask women out on dates, but they can do this?

But many Gamergaters also seemed, frankly, just tickled by all the attention. Midway through, someone merrily created a “Raina Punjabi” Twitter account, as well as a Redchannit one, adorned with Ice-T’s face.

That’s because gamers were tickled by this. The episode is the functional equivalent of a nuclear apocalypse originating from the Oompa Loompas of Charlie & The Chocolate Factory. Is that the next SVU episode? Tracking down the genocidal Lollipopkin? 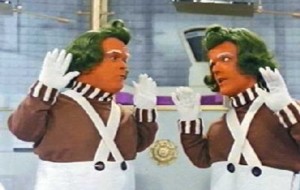 Great work, NBC. You exploited an ongoing crisis that threatens the lives of real people for entertainment, made law enforcement the “heroes” in a situation where they’ve done virtually nothing, made women the broken, passive victims in a situation where they’ve actually showed remarkable strength and courage, and managed to piss off, well, everyone. That takes real skill. Level up, or whatever.

You can’t please SJWs either, apparently. Unless you write it precisely how they want, it doesn’t matter to them. Gamers were portrayed as sex terrorists and you want more?! I just don’t understand how these people function. Do they see sexism in the phallic nature of a soda straw? Is it misogynist that Kate Upton wore a bikini yesterday? Is it racist that yellow rice and black beans, a staple Cuban dish, is called Frijoles Negros y Arroz Amarillo?

What suffering? What strength? I’ve been called worse things than the people trolling Anita Sarkeesian’s twitter by my own friends. Does she really think the eeeeevil gamer terrorists are going to break down her door and rape her?

Well, maybe NBC does. But then again, nobody ever accused these people of being particularly intelligent.