UCC Shooting: The Culture of Helplessness

Mass shootings have become something of a regular occurrence in America. A few times every year, some lunatic goes crazy, comes in guns blazing, and slaughters as many people as possible before going down or getting captured.

Other outlets have already covered the incident better than I can, making note of the shooter’s particular animus toward Christians. This, incidentally, is similar to the Charleston church shooting in that respect. There has been a tendency of late for Christians to feel as if the establishment is targeting them. The UCC Shooting seems to be circumstantial evidence that they may be correct, a hatred of Christianity may be turning deadly in America. Certainly it already has in the Middle East.

But again, I digress. My point here is to discuss a phenomenon which has bothered me since 9/11: Americans seem to be losing their martial spirit, their tendency to run toward the danger, guns in hand, rather than submit, bow their heads, and wait for the inevitable to consume them.

We know that the passengers of Flight 93 fought back and overwhelmed their attackers. They died in the process, but saved countless lives by preventing their craft from being used as a weapon like the others. These people were heroes who went down fighting. I can only hope that if I am caught in such a situation, I can honor them by doing half as much. Yet, it must be said: why didn’t the passengers of the other planes do the same?

Naturally, they probably thought that they would be ransomed. Or, perhaps, it was fear that held them back. But when you have nothing to lose, why not fight back?

Fast forward to our present circumstances. One man refused to be a passive victim. Veteran Chris Mintz charged the shooter and was shot seven times in the process. Yet he was the only one.

The esteemed Brad Torgersen, author of Chaplain’s War, explains it for us:

“Once again it strikes me how we have become a society of trained helplessness. We duck and cover and hope the evil will not notice us. And of course evil roams freely, shooting people in the head.”

Only the Army veteran could summon the courage to fight the shooter. The rest passively allowed themselves to be shot. This is anathema to me. I could not imagine surrendering in such circumstances. I intend to live, and if life is no longer possible, I would at least make the cost of my death as high as possible, so as to even the scales. It fascinates me just how helpless people are today.

We are a species that once fought grizzly bears and sabertooth tigers in the wilderness. We hunted buffalo with spears, arrows, and rocks. And yet, today, people cannot summon the courage to fight for their own life even when they have nothing to lose by doing so!

This sort of stupidity and cowardice is ingrained in our children from an early age, through this super-self-esteem-building, anti-bullying claptrap espoused by modern psychologists and educators. Take a look at this little gem:

Roleplay with your child how he can stand up to a bully. Point out to your child that the bully wants to provoke a response that makes him feel powerful, so showing emotion and fighting back are exactly what the bully feeds off. Explain that while he can’t control the bully, he can always control his own response. So in every interaction, how he responds will either inflame the situation or defuse it. Your child needs to avoid getting “hooked” no matter how mad the bully makes him.

The best strategy is always to maintain one’s own dignity, and to let the “bully” maintain his dignity, in other words, not to attack or demean the other person. To do this, simply say something calm like:

“You know, I’m just going to ignore that comment.”

“I think I have something else to do right now.”

Wrong. Dead wrong, in this case. When a bully attacks you, you fight back. Even if the bully wins, the cost of his victory will weigh heavily in his mind. If you do enough damage on your way out, he’ll probably ignore you in the future. He’ll also reconsider attacking others, because if people keep standing up to him, he’ll learn quickly that bullying won’t make him feel powerful. Rather, it will result in black eyes, bloody noses, and taunts from his compatriots.

Can you imagine attempting to reason with a mass shooter this way? “Oh, please, Mr. Shooter, I recognize that you are having self esteem problems, and I’m just going to ignore this bullet to the brain so that you can maintain your dignity.”

People are trained to avoid conflict because the Progressive Left has propagated the idea that all violence is evil. Fighting back is, in their estimation, as great a sin as the aggressive offender’s own acts. Even greater, in fact, because they will excuse the aggressor’s actions by saying that he was the victim of the Patriarchy, or microaggressions, police profiling, or mental illness. By standing up to the bully you are, in effect, oppressing him. That’s how ass-backwards Leftist “logic” is.

We encourage mass shootings today through propagating the culture of helplessness. Gun rights activists are fond of explaining that gun control is unlikely to stop mass shootings. But the problem goes a lot deeper than that. Certainly, more good people with firearms (and less gun free zones) would have an effect. But, it’s not simply whether or not people are armed that is the issue. A shooter in a college or a mall, a man armed with a box cutter on an airplane… these people are far outnumbered even by the unarmed citizenry. A simple mob attack could easily stop the shooter regardless of how many of them were packing heat.

In Britain a couple years ago, a Muslim beheaded a British veteran in broad daylight, in front of a crowd of people. The only person to come to the aid of the victim was a woman who the Muslim did not perceive as a threat. Even then, all she could do was stay with the body and call the authorities. Yet a crowd surrounded this man and did nothing.

Where were the British people who conquered one quarter of the entire Earth? They could not even summon the courage to defend one of their own, in broad daylight, against a knife-wielding Muslim, when they outnumbered the attacker 20 to 1.

Now, let’s see how the Progressive Left views the shooting:

So, our friendly Progressive informs us that men are responsible and masculinity is to blame. Yet, the only one who tried to save the victims was Chris Mintz, a veteran and a man willing to do violence on behalf of the innocent. Mass shootings do not comprise a problem of too much masculinity. They are the result of an insufficient amount of masculinity and an abundance of cowardice, enabled and supported by a culture of helplessness.

But, as the TV salesmen are fond of saying, wait, there’s more! 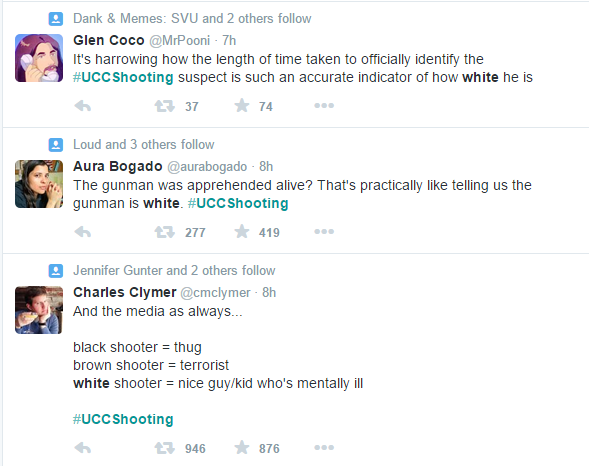 The shooter is half black. Mixed race. Don’t let that stop you, though, Leftists.

So, whiteness is to blame, I suppose. Like the mixed-race shooter that killed the reporter and cameraman during a live broadcast, the Progressives have been tripped up by the fact that the shooter doesn’t fit their preferred demographic narrative. Was it his white half, I wonder, that forced him into violence? Indeed, the shooter’s anti-Christian rhetoric, and apparent targeting of Christian victims, seems to be anecdotal evidence that that wasn’t some kind of Right wing radical. But, just like the aftermath of the Boston Marathon bombing, the Left rushed to judgment, hoping against hope that the perp was a white guy.

I would argue that the real issue isn’t the race of the perp, or his sex. Rather, it is a culture of helplessness that, like the schoolyard bully, enables the shooter. Someone considering whether or not to engage in such violence has to ask himself the question: am I likely to succeed, to kill a lot of victims. Mass shooters want as much attention as possible, they want the greatest number of victims possible. They want to go out in a proverbial blaze of infamy.

Getting off one or two shots before the mob of angry Americans tears you limb-from-limb doesn’t work in that model. Even the psychopathic lunatic would have to weigh that risk before engaging in his violent attack. The terrorist hijackers would have to account for the possibility that, not only would they die (often a given), but they would fail in their mission.

Leftist feel-good, non-violent pacifism has created the mass shooting epidemic, not a lack of gun control. This isn’t caused by some kind of White supremacist Right-wing conspiracy, nor is it caused by “toxic masculinity” as McIntosh would have you believe.

It’s caused by pansies refusing to do as Chris Mintz did: charge the enemy, even when all hope is lost. It is caused by a culture of helplessness, which enables the cowardly and punishes the strong. It starts in elementary school, where the bully gets off, and the victim is punished for fighting back.

To Hell with all of that. If a shooter comes for me, I will fight until I can fight no more. You should do the same, dear readers.