There was a historical story I came across when I was young, and it stuck with me. In it Jamukha, a sworn compatriot of Genghis Khan, rebelled against his master. For a time, the war went badly for Genghis Khan, for his former blood brother was an astute tactician and won many battles. Genghis proved to be the better strategist, however, and in the manner of Fabius Maximus against Hannibal, outlasted his enemy. When Jamukha was captured, betrayed by his own followers, Genghis Khan proved merciful. The Mongol lord offered to renew the blood bond between them and forget all that had transpired. Jamukha wanted no part of this and asked to be executed in bloodless manner, as befitted his station. Genghis Khan granted the request and had him rolled in carpet and trampled to death.

Quintus: People should know when they are conquered.
Maximus: Would you, Quintus? Would I?

Peculiar notions of honor surround war. Joseph E. Johnston surrendered to William T. Sherman in the Civil War. For the rest of his life, Johnston remained the closest of friends with Sherman, who had been thought of as brutal and cruel to the South. The friendship was so great that Johnston, himself an ancient man by this time, insisted on being a pallbearer at Sherman’s funeral, a thing contributing to his own death shortly thereafter.

Both the surrender of a tenacious opponent and the valiant struggle to the end of hopeless defenders are honored in the annals of military history. We admire the former for knowing when to quit and fighting honorably. We admire the latter for courage and conviction. Jamukha could have lied to Genghis, feigned submission, then moved against him again. But he would not, preferring to die on his own terms.

Honor of this sort began to die in the modern age. Warfare lost its personal component as the ranges grew greater. With the advent of the Total War doctrine, an entire state would mobilize in order to pursue the war. While devastating wars were nothing new, the industrialization of the business made it impersonal. Nothing was off limits. Propaganda made its appearance, which was basically the industrialization of ideology. Wars were fought for complete psychological, economic, and military dominance on a level unparalleled in history.

To say the World Wars were devastating affairs is a cosmic understatement. But the unwitting casualty of this affair was the extinction of the honorable opponent. A few still existed in World War II. Erwin Rommel was well-regarded as a good man and a cunning leader. Yamamoto was similarly regarded as a naval leader. But they were aberrations, throwbacks to an earlier age. Total War meant that you had to demonize your opponent in the press, propaganda meant that the enemy must be regarded as evil and devoid of all virtue. View propaganda posters on all sides of the conflict and you will see the same thing: the enemy was nearly demonic. 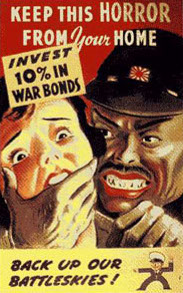 Total War also produced an unwillingness to pursue such violence in the future. With the advent of atomic weapons the possibility existed to not only defeat and subjugate your enemy, but to annihilate the Earth along with it. Even the lunatics running the Communist world did not want that.

Propaganda, however, continued its evolution. Indeed, it soon supplanted violence entirely as the primary means of waging war. Vox wrote a screed on the subject here. Propaganda is Total War on the moral and psychological levels, and it requires a complete dismissal of the honorable systems that tacitly governed war previously. To the modern Social Justice Warrior, the enemy cannot possess honor because he is the enemy. Francis commented further on how the radical progressive agenda (using gays as a mask) has become a complete and total annihilation of Christian belief systems. This is Total Ideological War, and it has become more destructive to the West than any number of Japanese bombs or Nazi warplanes. It has evolved from its primitive beginnings in the 20th century to embrace all forms of media. You are bombarded with it in everything from TV commercials to ads on your smartphone. 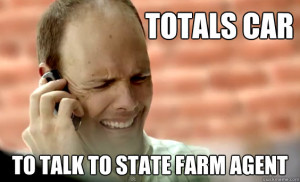 This commercial is modern Feminist propaganda, wherein a crying bald man calls his Empowered Female Agent ™ for help. Think on how many similar commercials you’ve seen.

Once you have dehumanized your enemy, stripped him of honor, you can justify any action toward him, including complete ideological annihilation. You have no reason to accept a negotiated truce, nor obey one should you decide to. When the media asks why the Right doesn’t support an increase in background check activity for firearms it is because of this. They know, deep down, that the truce will not be obeyed by the Left. Progressives will take that strong point, then demand the surrender of the next thing. If the Right thought the Left had honor, and that an agreement would be upheld, they might be willing to find compromise.

Indeed, compromise might even be possible on the Gay marriage issue, if the Left were interested in a negotiated settlement. Naturally, they are not. They are practicing Total Ideological Warfare. Understand this: they will not stop until Christianity has been eradicated. They will not rest until men are slaves or do not even exist. There will be no peace until Whites are extinct or second-class citizens. War will not end until Western civilization has not only been destroyed, but its entire history has been burned and forgotten, until it has been erased from memory. Don’t believe me? Look up #KillAllMen on Tumblr. Even the male Social Justice Warriors are in on this:

This is your enemy. If he’s willing to off himself in an effort to win the war, what do you think he will do to you? This is the ideological equivalent of a suicide bomber.

Folks, you are facing a war of annihilation. For now, it has restricted itself to the ideological level. But this is only because, for the moment, our side still holds enough physical weaponry to make the issue contentious for them. Mark my words, the moment they believe they have physical supremacy, they will annihilate you. Not only you, but everything even tangentially related to you. Your religion will be erased, your books burned, your history lost, your bodies killed, and your genes wiped out.

This is Total Ideological War. Like civilian installations were bombed in World War II, like mass murder across the globe in that war, there is no neutrality, no sideline and no honorable surrender. Choose a side and defend yourself accordingly.