This election year has been Hell. The mudslinging, the hate, the divide… it’s grown to monumental proportions. But what is truly shocking is the level of outright stupidity pandered by the media. We’ve long known that the media was in the tank for the Democrats. That much was obvious to anyone right-of-center who possessed one or two functional brain cells. But we’ve reached a new low in media bias, wherein they are peddling things so obviously untrue that I wonder how even the most die-hard Leftist could possibly believe it.

A writer for Time magazine has this to say of Donald Trump: 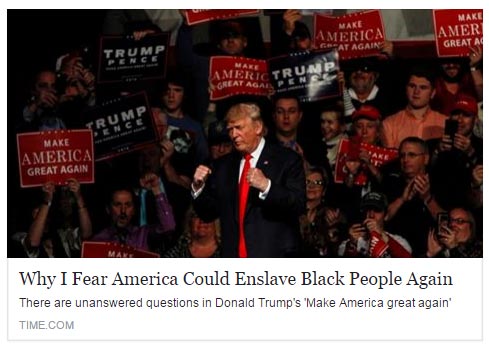 This is what we in the punditry business call “going the full potato.”

This is so stupid, so bizarrely biased and obviously false that I cannot even bring myself to fully fisk it. And I just got done fisking a guy who thought he could best serve black people by never listening to rap music unless they gave him explicit permission to do so, after he performed faithful service to Black Lives Matter, of course. Yes, our friendly neighborhood Time magazine hack has gone straight past retarded, and into full potato territory. Observe:

And, three: To what specific period of American greatness are you wanting us to return? When black folk suffered segregation after slavery? When women had no right to vote or control their own bodies? When gay brothers and lesbian sisters felt ceaseless hate? When we stole land from the Native Americans? When we sent Japanese families to internment camps? When America lynched Mexicans? I just need Trump to give me some clarity on the time period he wishes to travel back to.

Here’s some news for mister snarky liberal bias, over at Time. You, sir, are among the dumbest creatures to ever walk the Earth. There is protoplasmic amoebic slime with greater insight into the world than you. I cannot even bring myself to capitalize your name, for capitalization is reserved for sentient beings, not for idiotic fungi growing on the dungheap of liberal media.

Just once, I want to see one of these morons take a trip the Middle East and fight for gay rights there, agitate to stop slavery in Africa going on right now, or stop the lynchings and killing ISIS is perpetrating today. These aren’t principles for them. They are just talking points for why they hate America so much. But even then, they don’t really believe any of this garbage. Their hatred for America is rooted in a sort of quasi-elitist “well, we should be running things” unenlightened self-interest.

Oh, and by the way, the darling of the Left, Franklin D. Roosevelt was the one that put Japanese into camps. Funny how that little tidbit gets forgotten and buried.

We have to be at peak SJW by this point, I cannot imagine them lowering their intelligence any further. This is a pearl of stupidity the likes of which I’ve never seen before. Witness it brothers, you may never see its like again.