They Live – On Islam and Western Suicide

Back in the late 80s, John Carpenter released a movie that was destined to become a cult classic: They Live. In the movie, the protagonist discovers, by putting on a pair of special sunglasses, that aliens have invaded the Earth and disguised themselves. They walked among us, controlling us through subliminal propaganda, gaining power so that they might extract resources, bring in more of their kind, and steal wealth from our planet. Naturally they had lick-spittle human allies, as well, who were fully aware that they were dooming their own species. Lately, the catchword “OBEY” has made something of a comeback among the meme makers of the Internet, those denizens of wretched hives (I say this as a term of endearment) like 4chan. 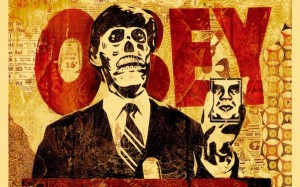 While nominally human, and not actually some kind of alien race from the stars, the quasi-aristocracy of America and the rest of the West is otherwise functionally identical to the invaders of They Live. They extract resources from you in the form of taxation, of market-power via cartel-like activity and, of course, through central banking, one of the essentials in Marx’s own manifesto. The push toward control of the money supply is such that many are now calling for a cashless economy. For cash cannot be so easily traced as electronic money, nor can it be as easily manipulated.

In a cashless economy they could, for instance, institute a negative interest rate (i.e. a tax on savings) in order to force you to BUY BUY BUY BUY. If cash existed, one could withdraw money from the bank and hide it in the mattress when they tried this particular scheme. CONSUME, pleb, for that is what you are for. Conversely they could ruin debtors with the push of a button, by forcing their interest rates to skyrocket. You would have no alternative, because only the central bank could offer you a loan.

This isn’t some grand conspiracy either. Their business is conducted openly, with only the thinnest of moral veneers applied to coat it. They propose to take your money “for your own good.” No, it’s not for your own good, folks, its for theirs. That has always been the excuse of the Left wing, but as Al Gore flies around in a private jet demanding that us plebs reduce our own carbon footprints, it starts to fall on deaf ears. 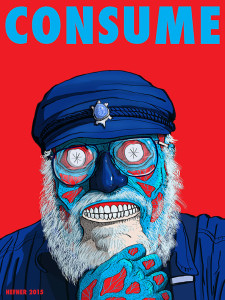 Social Justice and Progressive Leftism are the human lick-spittles, the toadies, useful idiots and operatives of this group. Take the recent #SadPuppies affair in Science Fiction. It was well known in certain circles that Tor Books (a subsidiary of Macmillan) was, effectively, the arbiter of the Hugo Awards. Patrick Nielsen Hayden and his wife, the great troll of the Torlocks, had a stranglehold on the affair. The question, of course, is who signs their paychecks, knowing full well what it is these people do? Those are your real enemies, though we must sweep aside these toadies in order to gain access to the enemies shielded behind them.

Look at Establishment Republicans and their toady-like behavior. The only reason Donald Trump is surging in the polls is that he has actually taken a hard line stance against illegal immigration and political correctness. Very few people genuinely like Trump, so his popularity is a reflection of just how much the Republican base loathed the Washington Establishment. Whether Trump is a genuine rebel, an aristocrat who has broken with the fold and declared for our side, remains to be seen. Fifty-fifty odds are better than we’ve had in awhile, frankly.

Personally, I’m inclined to give him a chance, but it’s not like I have much of a choice in the matter. It’s Trump or another Chump.

Why are the aristocrats purposefully destroying Western Europe right now? While the tragedy of dying children is well known to us, indeed I commented on it previously, most of the refugees are anything but dying children. They are young men, aggressive and already rioting for more handouts from the plebeians of Europe. That’s right, far from being grateful for “rescue” from their plight, the refugees are angry that Europe is not giving them more, or giving it to them as quickly as they would like. 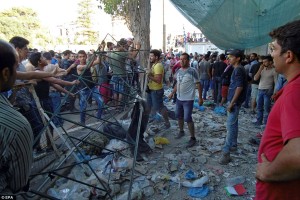 Here are your “peaceful” Muslim conquerors. They are tearing apart the port because the Greeks are not giving them what they want quickly enough. Constantine XI is rolling around in his grave.

Even in its critically weakened state, the West could crush this nascent invasion with minimal effort if it truly desired to do so. Instead, the defenses of Europe are silent. Indeed, the question on everyone’s mind is how much treasure must be given to these invaders, and what regions of Europe should be ceded to them. These are not the actions of a strong and dynamic civilization, but that of a weak, supplicating one.

The fact is, multiculturalism is a crock. It has always been a crock. But at least some cultures could pretend to get along some of the time. Islam doesn’t even bother to do that much. Tossing hundreds of thousands, or even millions of Muslims into a multicultural stew is like lobbing a live grenade into a nitroglycerin factory. This is so blatantly obvious to anyone with a functional brain cell left in their skull that only one conclusion remains. As Sir Arthur Conan Doyle told us: “Once you eliminate the impossible, whatever remains, no matter how improbable, must be the truth.”

Only one possibility remains to us:

The elites, the aristocratic rulers of Western nations around the world, are deliberately destroying their own countries.

Why they are doing this is a mystery to me. Certainly they must be getting something out of it, though I cannot imagine what that could possibly be. It seems to me that destroying the West would be, in effect, killing the Golden Goose. But clearly, some benefit must be had in its destruction. 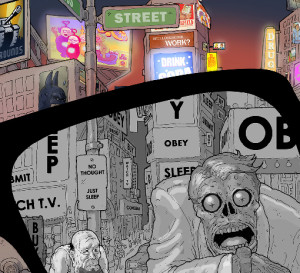 If only it were this easy.

I do not have a pair of magical sunglasses to give you, so that you may see the propaganda all around you, so that you may know of the enemies in your midst. But that doesn’t change the fact that they are there. They Live. And while they and their servants thrive, the West will continue to be destroyed from within.