The Presumption of Guilt

But, in recent decades, the paladins of Political Correctness have found a method of circumventing the law and its presumption of innocence. They attack your character instead, and being defensive is, in their eyes, tacit admission of guilt.

Take the example of Brendan Eich. He donated $1,000 to a campaign in favor of Prop. 8 in California. Or, in simple terms, he donated a relatively small amount of money to a campaign trying to define marriage as between a man and a woman, and not between members of the same sex. He was accused of being a homophobe for this, tarred and feathered, and ran out of his job.

Brendan Eich protested that he was not a homophobe and, in fact, many employees of his company were gay, and he had no problems with them, nor they with him. It was all in vain. He was being defensive, they said, and that is tacit admission of guilt. But if defending yourself is proof of guilt, how can one possibly challenge the charges?

Brad Torgersen was accused of racism. When he posted a picture of his wife on his blog, a black woman, and his mixed-race child, this was taken not as evidence that he wasn’t a racist, but rather as evidence that he had married her in order to hide his racism. It wasn’t even Brad himself who reposted the picture of his family on Twitter, it was ClarkHat. So, the defensive argument couldn’t apply; other people were defending him. The paladins of Social Justice needed a different way to dismiss the evidence. 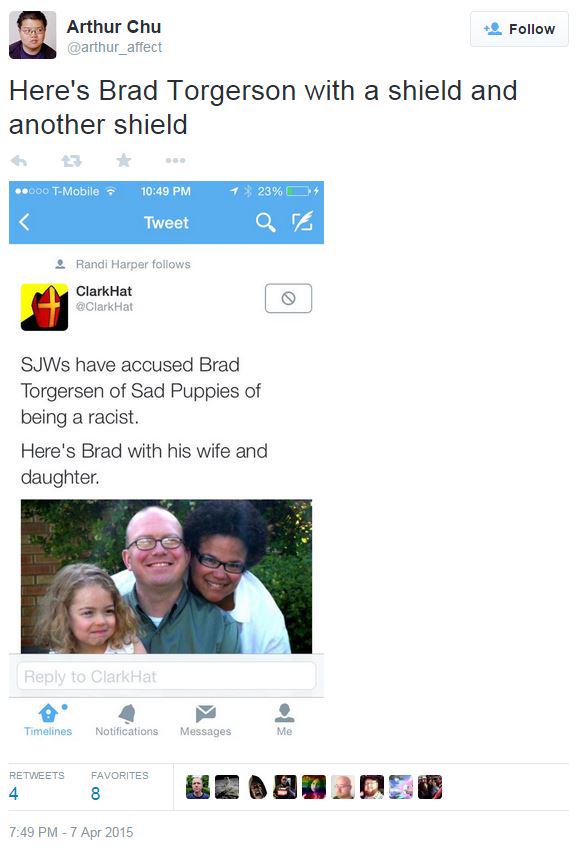 Arthur Chu believes that Brad married his wife in order to deflect future charges of racism from SJWs.

No evidence of innocence is ever allowed in the court of public opinion. The accusation alone is proof of guilt. It’s worse than even the presumption of guilt, for at least in that scenario it is possible that proof of innocence would be accepted.

Of course, this is often phrased in weasel words:

Here are things you want to avoid saying [when accused of racism]:

I recommend you do say something like “I’ll think about what you said.” Every interaction you ever have is an opportunity to learn. You might not agree with this person about their interpretation of your behavior, but it’s good to understand their perspective.

In other words, the Social Justice recommendation, when accused of racism, is to tacitly agree with the charge, then reform your behavior so as not to “trigger” someone else’s interpretation of racism. You are not allowed to defend yourself.

Notice that this individual says “it’s not for you to decide what level of sensitivity is appropriate.” This means that the person making the accusation has all of the power, and the accused has none. The accuser determines what is an offense, and what is not. The accuser determines your innocence or guilt (hint: you are always guilty, otherwise why bother with the accusation in the first place?). Your accuser is the law, the judge, and the jury all in one.

That is what folks in the legal profession call a conflict of interest. 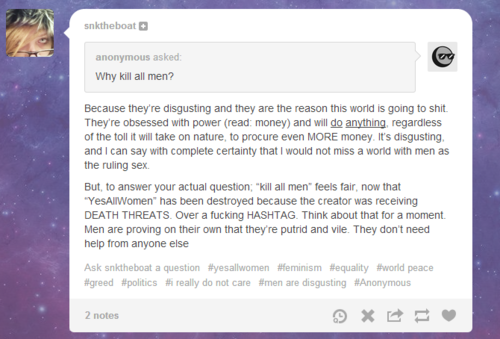 Some internet trolls sent threats to a woman, and this is considered justification for eradicating the entire gender. All men are considered guilty without trial.

The interesting corollary to this is that these same people frequently tell us that “not all Muslims are violent terrorists.” Their twisted logic is reversed whenever it pleases them. Just as they can arbitrarily determine who the guilty are, they also reserve for themselves the privilege of determining who the innocent are.

Michael Brown robbed a convenience store moments before he died. But he was portrayed as an innocent man simply because it pleased them to do so. Whether or not he deserved to die, and whether or not the police officer should have been charged for his death is another matter. But even there, they denied the officer the presumption of innocence. He was guilty, they said, and they determined this before a trial and before the legal authorities even met on whether or not there was sufficient evidence to charge the man. Michael Brown was innocent, they said, even though we had proof he was not.

What we are seeing is a de facto elimination of the presumption of innocence, and furthermore, a de facto repeal of the first amendment. De jure, the legal system exists, and you will not be officially convicted of a crime if the paladins of SocJus come for you. But they will take your job from you, bankrupt you, destroy your reputation, and blacklist you from any organization that they control.

This is tantamount to an attempt to subvert our freedoms by extralegal means.

In Sara Hoyt’s second Darkship book, there is a moment where the citizens of Eden realize that a tyrant is trying to take control over them. Duels are executed on the spot. People rise up almost immediately, angry and betrayed. They fight as soon as the truth is discovered, that a man is attempting to use their traditions against them.

That is what we must do. Remember that the Constitution only operates so long as Americans actually believe in it. When they believe in it no longer, it is just an empty document behind a sheet of bulletproof glass, dried ink on ancient paper, signed by men long dead.

You are witnessing a coordinated attack by enemies of freedom. And when we attack them, they retreat claiming the very freedom they are trying to destroy. It’s just “capitalism” when they attack a business for a CEO’s different personal political views. It’s “free speech” when they say that hate speech laws should be passed, and that they (the SJWs) should have control over what is defined as such.

They do not believe in the words of the Constitution. They only twist it and use it as a weapon against us.

There is a phrase which, I believe, describes my views in this matter succinctly: good does not mean nice. Remember that, when someone ways “what would Jesus do” whipping con artists who have taken up residence in the Holy Temple is within the realm of possibilities.

Take it to heart, dear readers.