The Plain Truth of the Sri Lanka Massacre

It was an attack against CHRISTIANS. The reason for the slaughter of men, women, and children was because they were CHRISTIANS.

Not “Easter Worshippers” – that tortured phrase that BOTH Obama and Clinton used. That’s the ONLY time I’ve ever heard those words used, as a lame description of the victims of an atrocity.

The Left is deliberately using such terminology to obscure the truth. They shout out about anti-Muslim “hate” – even though a significant percentage of those “abuses” are, in fact, hoaxes, designed to twist public opinion in their favor. Are SOME true? The odds say that ALL the reports could not be false, but – MOST of those that get investigated have zero evidence that an actual crime – as opposed to a pathetic attempt to gain headlines – had occurred. Many of those that are exposed have the supposed victim being the perp.

Wake up! Christianity is under attack; it has been for quite some time. I read Their Blood Cries Out – written in 1997 – and, even then, Christians worldwide were in fearful danger. 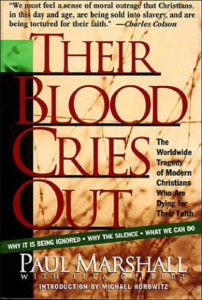 I highly recommend the book, which is still available. Here’s the link to the author, Paul A. Marshall’s page. He has other books on Christians, and on Islam, as well.