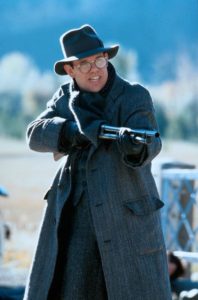 He was the accountant in The Untouchables movie, whose brilliant idea of charging Capone with tax evasion finally gave the task force a conviction against the mobster. Since then, in many federal cases, rather than try to prove someone’s connection to murder, theft, or conspiracy, the subpoenas go out, the financial paperwork is collected, and the case is turned over to the guys with pencils and calculators.

It’s still one of the most popular strategies for getting convictions. The rules for financial reporting, money movement and sequestering funds that cannot legally be co-mingled are byzantine, complicated, and prone to interpretation, When a target is found to have violated one or more of these rules, plea bargaining comes into play. These targets are everywhere in the 2018 HRC Presidential Campaign.

To me, that would be the obvious solution to the problem of HRC/BC’s campaign improprieties. Bring in the accountants, bring the mid-level employees for a talk, explain that if they cooperate, they MIGHT escape both jail and a nasty financial hit (for lawyers and in penalties), and watch them do the Squealer Dance.

But, couldn’t HRC just send her high-prices lawyers over to help said former employees out? No, because that would allow the feds to charge the schmucks with conspiracy, as well, for receiving services of value. They’d have to hit the state-level money guys, through whose campaign the money is reported to have flowed (it barely stopped long enough to be counted).

Those would be the guys with little loyalty to a fading, aging, formerly powerful political hack. Start with those guys, and work up a case that will entangle the Big Kahuna.

Hit them from all sides: federal crimes, violation of campaign laws, IRS abuses, FCC violations. Charge them with so many crimes that, even if they plea-bargained, they would spend years defending themselves, and likely face at least SOME jail time.

Then, once the guy’s trussed and on the spit, just before you light the match, offer them a walk – IF they testify against the Clinton Mob.