Pay attention class, we now have a prime example of our civilization in decline…Ferguson, MO.

I hear a lot of wailing and gnashing of teeth, of late, as to the “overstepping of authority” and “militarization” of police. Considering I am Military, and having spent some time on the front lines, I feel a little “called out” as it were, and will, reluctantly, weigh in on the matter.

First, I will state up front, I do not see the police as “militarized.” They are 21st century cops, equipped to handle the problems of the 21st Century. You see, when we moved into the 21st Century, we embraced these awesome advances in technology, like, body armor, accurate duty rifles, armored vehicles, and vision enhancement systems, all developed with the unspoken intention of putting LESS people in boxes, on both sides of the gun. 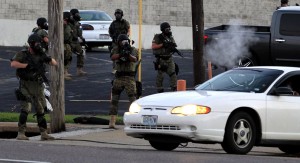 They may appear intimidating, (they’re supposed to), they may appear similar to Soldiers (they don’t, and aren’t.) but the simple facts are, they are equipped to effectively counter to threats to Law & Order that we face within our communities today.

A military acts in such a manner as to disguise it’s movements, defend and attack from concealed positions, respond with overwhelming firepower, using all available means to maim and kill in an effort to break the backs and the will of our enemies and end the fight. We use belt-fed machine guns, launched and hand thrown high explosive grenades, artillery and mortars, rockets, white phosphorous, heat-seeking and wire-guided missiles, just to name a few, with the express goal of killing the enemies of our nation, wholesale. And we try to do it before they even realize we’re there in force.

The police in civil unrest situations act in such an anti-thesis to a “military” that to even draw the correlation is laughable. They get out in the streets, in force, with bright flashing lights, PA systems, and the word “POLICE” big and bold across their chest. They draw as much attention to themselves as possible, they act with restraint, employing non-lethal means, tear gas, smoke, pepper spray, bean bag rounds, flash-bangs, they do everything in their power to restore order and inflict no lethal harm until the last possible moment, when the choice is kill this crazed rioter, or leave the scene in a body bag.

I admire their restraint, especially with the amount of gunfire coming from the animals and the molotov cocktails being thrown. You ever had a molotov thrown at you? You’d want to shoot that motherfucker too.

The Second Amendment is a beautiful thing, and I am firmly in the camp of relaxing restrictions on firearms because it is simply a guaranteed right (and potentially my duty as an American) to own one. But, unfortunately, it goes both ways. Just the same as the Police can have possession of a rifle that fires a .50 BMG, so too can Snoop Diggity fo’shizzle thug life in Detroit. And let Snoop have it! Until such a time that he proves that he lacks the maturity to properly execute that right (and inherent responsibility) i.e. participates in felonious fucking activities.

And when said felonious fucking activities involve that .50 cal rifle, or molotov cocktail, or AR-15, or AK-47, you, I, and everyone nearby, are gonna be glad when the cops pull up in that vehicle with armor too thick for Snoop to shoot through.

Look. I get it. There are concerns about the depth and breadth of authority our Police enjoys in this day and age, for every good news story of a police officer adding to the enjoyment of life within his community, there’s a horror story about an overreaction, an overstep, or a bad policy decision, but there is an effective way to challenge this authority and see it curtailed, should you so desire, and that desire is shared by many.

The “effective way” does not involve chaos in the streets of your community, burning businesses, and pillaging anything you desire. Such activities can, should, and will be met with appropriate force, and the “Jack Booted Thugs” will return with their armored vehicles.

The courts, and the offices of your legislators is the place to fight the police. Or maybe, hell, stay within the bounds of the law. I personally have enjoyed a very fulfilled life up to this point and the only run-ins with the police are when I was driving my souped-up truck too fast. I can’t really complain.

But for fuck’s sake, keep your battles with police out of the streets. Fight the Police in the streets and they will, rightfully, do everything in their power to ensure that you lose.

It’s not just their job, it’s their duty. (And it’s of great amusement to guys like me, I might add.)

I want you all to watch Ferguson closely. This is it, folks. Ferguson, is the Declination. The Free Shit Army is on the march and what we saw the night of the 24th is what “they” want. Total Anarchy, mob rule, and it ain’t over yet.

I don’t know about you, but I feel for the average Joe American in Ferguson right now, just trying to raise his family and get by. It’s a terrifying thing to try and sleep at night not sure if the next thing you’re gonna hear is some ignorant race-baiting cowards  smashing down your door to assault you and yours, steal everything you worked so hard to get, and set your house on fire just because some thug who so happened to be black, fought a police officer (who so happened to be white), tried to take his gun, and, rightfully, got gunned down in the street for his trouble.

That’s what they keep screaming, anyway. I’m pretty sure the rest of us sensible folk have already seen through their lie.

Fucked up world we live in. I really wonder if we’d a having this discussion if Ofc. Wilson was black?