Dear readers, is it just me or does 2016 already feel like a long time ago? I don’t know about you, but I miss the days when Woke Democrat mobs only came after people who posted nationalist memes and ethnic humor on Twitter. Today, you can be cancelled for almost anything – or at least the attempt can be made by nominal Republicans angry that a pizza chain dared to thank a random person on Twitter in 2012. As long as, that is, said random person became an official in the Trump administration 8 years later.

The Great Awokening means you should be able to accurately predict mob opinion. Failure means Cancellation.

Cancel culture now includes those who do not directly support #BlackLivesMatter, even if they agree that George Floyd’s death was wrong and police reform is urgently needed. If you don’t believe in the core principles of Social Justice – the current central premise of its most prominent faction being, of course, that if you are white you are guilty – then it is time for you to be cancelled.

The Great Awokening doesn’t care about the cause, only your virtue-signaled submission.

There are so many more incidents I’ve seen lately – and I’m sure my readers have seen still more. This includes people in my personal life, many of which have stated that if you are not protesting with BlackLivesMatter, then you’re a Fascist, and you need to be cancelled. Or, perhaps, you should be reeducated in camps, as Bill Palmer explains: 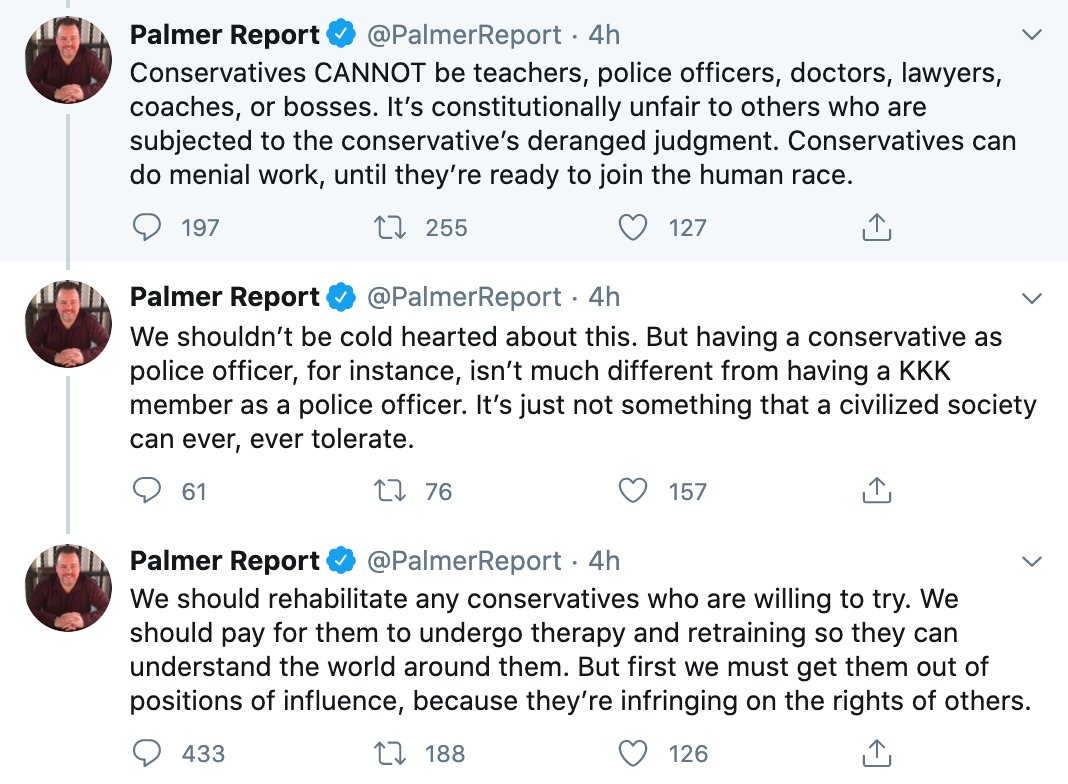 If you’re right-of-center, well, you should clean toilets or something, or be sent to reeducation camp for ‘rehabilitation’. These views are mainstream on the political Left. Or at least they are among mainstream Leftists I know in my personal life, and see on social media. Leftists who still want to have a peaceful dialogue with Rightists appear to be an endangered species.

The other day, I saw a tweet from a group of armed Texans ensuring the Alamo was protected. A great many Rightists praised them, and while I agree that it was a good thing, I disagree that this means anything in the long run. Eventually Texas will go Leftist. In a decade. Two, maybe. I don’t have a good handle on any kind of timeline, but it will. And then the Antifas will burn it down. Do you think activists have forgotten that Texas was a slave-owning society that took land from Mexico? That’s how they’re going to see it.

You might save the Alamo today. You won’t tomorrow. They will come, one day.

The Great Awokening holds nothing off limits.

Some folks agreed with Confederate statues coming down because some were erected by legitimate segregationists for political purposes. That, and the Civil War meant that Southern leaders and military men were, in effect, traitors. That second one is a position I generally disagree with – I think that, despite the bad motivations behind Southern secession, there’s a lot more nuance to men like Lee, who were in a position to either betray their home state, or the Federal government. But whatever. I get the arguments.

I also told everyone that the mob would not stop with the Confederates. Columbus statues are coming down. Thomas Jefferson too. You may say “well, Columbus did a lot of terrible things.” Sure. You may say “Thomas Jefferson carried on illicit relationships with his slaves.” Also true! Welcome to the wide world of humans are imperfect jerks. Are we honoring them for the bad things they did, or the good things?

Even if you agree with those… what about George Washington, who slowly came to despise slavery, and provided for the freedom of his slaves? What about the statues of prominent abolitionists that have been vandalized because they were white? What about Winston Churchill’s statue in Britain, that was covered with graffiti? Did they deserve it? Well, I’m sure they’ve all done something bad. And in Churchill’s case, fighting actual, real-life Nazis is not worth setting aside his mistakes. You cannot be honored unless you are perfect, it seems.

Are we making the argument that we should have no monuments of people, because the woke crowd will find something wrong or unwoke with every one of them?

The Great Awokening tolerates no monuments to the past.

Watching media talking heads and prominent Democrats (and Quisling-like Republicans like Rick Wilson) celebrating the protests and excusing its spread of COVID-19 while simultaneously condemning Trump rallies for spreading COVID-19 is a hilarious exercise in doublethink. It reminds me of the constant back-and-forth reporting about the utility of wearing a mask. If you wore a mask, you were depriving doctors of them, who of course needed them – even though they didn’t work – and, of course, it wouldn’t work for you. Then all of a sudden if you went anywhere without wearing a mask, you clearly wanted old people to die.

As Zero HP Lovecraft said on Twitter: “The irony of millions of people chanting ‘I can’t breathe’ as they huddle together and expectorate a respiratory virus at each other is a gift from Gnon.”

The Great Awokening has no central truths. Everything is fluid.

If someone with a cell phone captures you on video during a heated political argument, prepare to lose your business… then watch as your spouse is also fired from his job. Say nothing and submit, and hope the Wokists pass over your home on their way to more prominent targets. Woke Capitalism means that almost every major company (except, paradoxically, Domino’s Pizza?) will fire you if the mob asks them to. And you cannot predict with decent accuracy what might trigger that mob, or cause them to notice you. Even the insufficiently-Leftist J.K. Rowling stands at the edge of the Woke precipice. If you’re black, your skin color does not protect you from the mob. If you’re a Leftist, your previous utility to the cause does not protect you. The mob has no rules, except that it demands submission to its tribe.

The Great Awokening might as well call itself Submission. Wait… isn’t there already a religion that calls itself that?

My friends, we are witnessing in real-time the birth of a new religion, and I feel rather like the Symmachi, or Julian the Apostate as Christianity spread like a great wave across the Mediterranean Sea, at last conquering the Roman Empire that, once upon a time, tried so hard to suppress it. Only where Christianity offered forgiveness and eternal life, Wokism brings only eternal guilt and damnation. Only temporary respite may ever be gained from it. Today’s loyal Antifa soldier will be tomorrow’s mob target.

Am I overstating my position? No, I don’t think so. Watch as the Woke participate in the washing of the feet. Watch as they chain themselves together to apologize for things they have never done. And notice, still, that their position at the bottom of the progressive stack – as the eternally damned – is never changed. You may submit, and gain temporary respite from the mob. But sooner or later, racist, you will be judged guilty again. You are privileged. All white people are racist. All men are sexist. All cisgenders are transphobes, and so on. The SocJus claim is that systemic and unconscious bias can never be fully eradicated. By being Woke, you become aware of your sin, but you are never forgiven for it, nor is there any redemption from it.

This unique twist on Original Sin – without the possibility of salvation – marks this belief system as something new, a sort of Post-Christian heresy, shorn of God, torn from the divine – a not-religion that somehow fulfills the same emotional purpose of a religion. A faith that requires no faith, only constant self-loathing. This not-faith gains new adherents by twisting out-of-context Bible quotes and spouting them at people who can summon no moral defense that does not awaken the wrath of the mob. “God is love!” Yeah, God is also the guy who thought the Canaanites sacrificing children to Moloch made them worthy of destruction at the hands of the Israelites.

Again, Zero HP Lovecraft captures it succinctly: “As with any religion, the faith with no name has its different theological schools, which even fight with each other. The major schools are queerism, feminism, and blackism, the latter of which is an ecumenism in which white people worship black people.”

In the current political climate, blackism is the leading denomination of Wokism.

In the Great Awokening, Moralistic Therapeutic Deism has finally found a new god to replace the one they hate so much: a Lovecraftian horror created from the collective virtue signalling of the mob.

In the Great Awokening, Trump is the equivalent of Lucifer. Because, as Satanists heading to the Antifa rallies have explained: Lucifer was the good guy of that particular story. Clearly. He was fighting against the oppressive colonialism of God. But in any case, the Orange Man is now the stand-in, the eternal enemy. Orwell’s Emmanuel Goldstein given real flesh. Someday, they shall distribute the crimethink, the golden book of Trump, containing within it every heresy, every blasphemy uttered by the ancient politician. Itself the only monument to the old world permitted by the Woke.

The ghost of Rick Wilson will smile with pride.