The Frog is Boiling

Many of my readers will remember an incident back in 2017, where a Right-wing protest and a Left-wing protest confronted one another in Berkeley and the “Based Stick Man” (Kyle Chapman) broke his stick over the head of a Lefty antagonist. At the time, this was so notable it became a meme. Gifs of the moment the stick broke on the Lefty’s head became associated with Mortal Kombat, Final Fantasy VII Limit Breaks, and other such things. Eventually a graphic novel of the event was even proposed.

In other words, this was a notable event. It was different enough from the norm of political discourse in the country to receive national attention.

Today, there are probably several stickmen hitting people over the head at political protests and rallies every week. The Frog has been slow-boiling these past three years. Achieving notability today means pulling an AR-15 and a handgun out on a mob breaking into your neighborhood, or killing two antagonists and wounding another as happened in Kenosha, or getting shot by a ‘security guard’ after some kind of argument at a protest.

Neighborhoods burn, naked women display their genitals at the cops, people fight in the streets, and we have the occasional open gun battle making its appearance. Hitting someone with a stick is nothing, now. From 2016 to 2020 we’ve gone from relatively normal protests and rallies, to dead bodies rapidly becoming expected in protests increasingly degenerating into street fighting. At this rate, a Beer Hall Putsch from the Left should Trump win wouldn’t even faze me. I more or less expect that it is more likely than not in the event of a Trump victory in the election.

In the last few years, the entire tone of political interaction in America has been poisoned. I remember the days where I could have have political discussion with Leftist friends, and they might disagree with most of what I said, but it was not a particularly big deal. The very same people are now posting things like “if you don’t believe systemic racism is the greatest problem facing America, don’t even talk to me! This is not up for debate!” Or another one: “it’s okay to disagree about favorite pizza toppings, but not over support for Black Lives Matter!”

Again, not up for debate.

The moral surety of the political tribes is what disturbs me the most. It is one thing to say “I think X is more likely to be true than Y” and act accordingly. It is quite another matter to say “X is definitely better than Y, and any disagreement means you are evil, and I have moral license to do whatever I want to force your obedience.”

Some people blame the political poison on Trump, and this might have carried water if the behavior originated with the MAGA tribe. It largely, however, originated with the political Left in recent years. It’s to the point that the Washington Post ran a piece about how only a Biden landslide victory could stave off the political violence. It was an implicit admission that if the Left doesn’t get their way, they will burn it all down (or at least threaten to). What is also implicit in this is that the political Right is starting to respond in kind (and the Kenosha shootings are tacit evidence that this worm is turning).

Now, I am cautious of using any one single graph as gospel. But this is nonetheless an interesting datapoint: 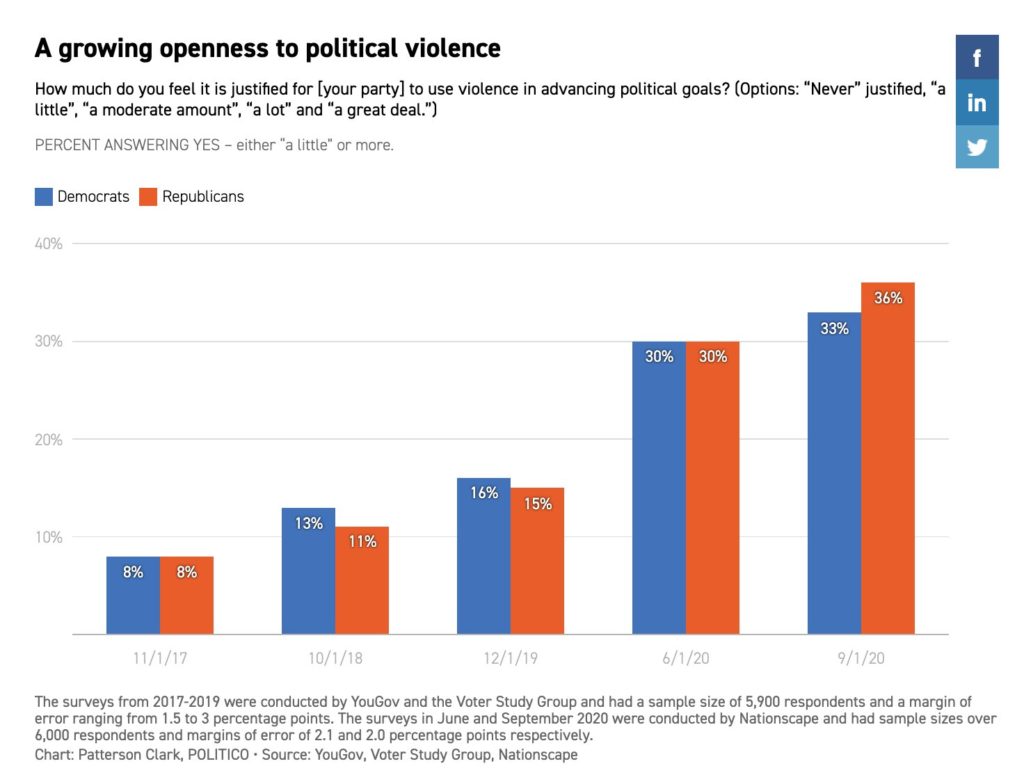 The trend here is worrisome. The Kenosha videos were fascinating in that if you listen closely, it sounds like there are other shooters other than Kyle Rittenhouse. No one else was shot aside from those involved with Rittenhouse, of course, but it was interesting that we had a city burning and some kind of roving gun battle in the streets. I mentioned earlier that this was the crossing of a political Rubicon. Protests haven become street brawls (Based Stickman gives us a rough timeline of when this began). And street brawls are starting to mutate into open war (Kenosha). Kyle Rittenhouse may be similar to Based Stickman in that he marks a point of departure, where history can say “this is when things really went off the rails”.

From 2016 to 2020, we went from large-scale (but mostly peaceful) protesting to street brawls and gun violence. Where will we be in 2024? When will the frog jump out of the pot? The whole tone and emotional tenor of political discourse has radically shifted.

America is heading rapidly toward something like Civil War (albeit nothing like the previous one). I see no signs that it will diminish, no matter who is elected in November. Trends continue until they don’t. We don’t know where the inflection point will be, or what it will look like. Tomorrow this could all calm down, though I don’t think it is very likely. But if the trend holds, America is in for some seriously dark times.

Keep your ammo dry, my friends. There’s a non-trivial chance you’re going to need it soon. The Culture War is starting to turn into something much worse.