The Fart Heard ‘Round the World

Eric Fartwell has certainly made an impression on the voting public before. Some time ago he made sure to inform the public that their rifles were hardly useful against the government in the event of another American Revolution because, as he explained, the government has nuclear weapons and the public does not. It’s difficult to tell where he was going with that. Was he proposing that the government should use nukes on civilian populations in the event of an uprising? That’s not a scenario that ends well for anyone – least of all the government. In any event, it was a stupid comment. We’ve been in Afghanistan since I was in my early 20s, and what are they fighting with? Largely crappier weapons than American civilians are likely to have – save for fully-automatic versus semi-auto. Asymmetric warfare doesn’t require the same level of armament technology precisely because it’s asymmetric. 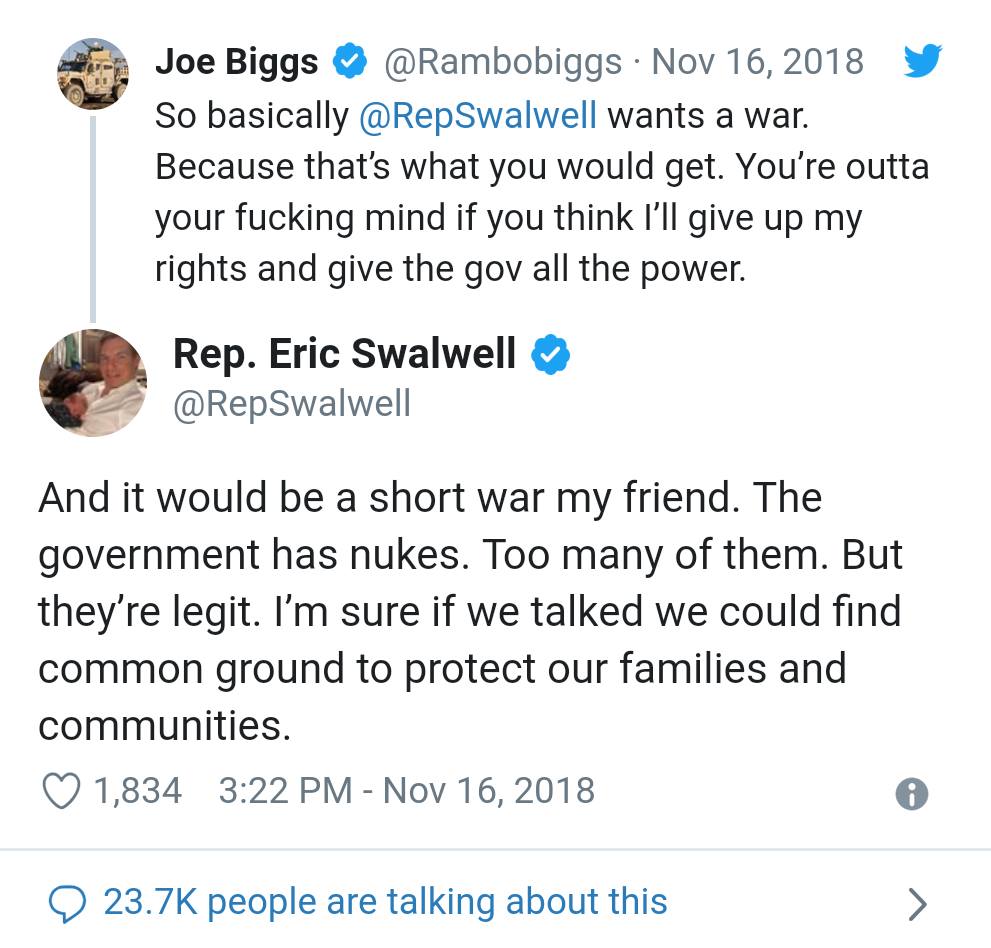 But whatever. I’m not going to claim I’m an expert on war. That’s for folks like Tom Kratman to go into. It’s not really a subject for me, and definitely not one for Eric Swalwell, whose familiarity with war – as with most Leftists – is quite possibly a negative number. No, today let’s talk about the other nuclear weapon in the room: the fart heard ’round the world on air. Fartgate: a political Hiroshima centered on Eric Fartwell’s ass. And damn, is he handling it poorly. It’s one thing to drop a buttquake, but quite another to do it on air. I give this one a solid 8.5, it was robust, had a nice reverberation to it, it was the kind of fart that Eric probably would’ve enjoyed (as Fat Bastard said in the Austin Powers movies, everybody loves their own brand) were the circumstances different. I always thought this guy looked like the sort of dude who Dutch Ovened himself and enjoyed it. Give it a watch, if you haven’t already:

Look at his face. Now, I may not be an expert in war, but let’s just say that I know gas. My diet is atrociously bad – or at least it used to be, I’m trying to fix that – and so I am no stranger to late night Taco Bell runs after a few beers. Or eating practically everything on the IHOP menu at 3 o’clock in the morning. Sometimes, I’m surprised my wife hasn’t divorced me – but whatever. Point is, look at the strain on his face. This is a dude who ate something he shouldn’t have, and he knows it. He’s trying to keep it together. There was a second civil war going on in his lower intestine. And brother, the South was winning this one.

Then there’s that pause and the expression his face – like Geordi LaForge in Star Trek the Next Generation when he realizes there’s a warp core breach in progress, and there’s nothing he can do to stop it. The Enterprise is doomed, Captain Picard. She’s going down. Launch the escape pods and abandon shit. That buttquake is happening, it’s an 8.5 on the sphincter scale, and there’s not much else to do but dive for cover and hope the buttquake didn’t come with any aftershocks. Eric, of course, tries to continue like nothing happened, and later he tried to deny it. But my friends, trust me on this. I know who dealt it – because in most cases, that would have been me. This guy is guilty. I’m the expert witness, ladies and gentlemen of the jury, and you better believe my testimony. In the matter of lobbing chemical weapons from behind that are worse than anything the Germans lobbed into the trenches at Verdun, I’m your guy.

The mic set to record speech picked this thing up. It wasn’t small, my friends. Hell, the Japanese would probably start running away from it. I imagine after the interview, Eric had to check his shorts and toss his underpants into a biohazard bin. But I’m sure whatever he had to say about Trump was totally important, right?

Now, could it happen to any of us? Yeah, sure. But if it happened to me – fat chance, I’d probably never go into politics – I’d own it. Hell, it could be hilarious. Don’t be embarrassed about it. “Hey, sorry, I ate too many burritos last night. And that’s why I’m so bullish on Mexican immigration! It’s climate justice, you know? Mexico has a pollution problem, and America hasn’t absorbed its fair share of methane and sulfur. It’s time for that to change! Riiiiiiiip. I’m doing my part!”

Make sure to end on a long, thin squeaker for that last little bit of comedy.

But is all seriousness, own it dude. Everybody farts. Even women who claim they don’t fart. Ever been to a women’s public bathroom? It’s a disaster area, usually. Smells like somebody was eating ten-day old lo mein and decided to wash it down with some ex-lax and a bag of those sugar-free gummy bears Haribo sells on Amazon, much to the consternation of the public. You know, the kind that lead to reviews like this one: 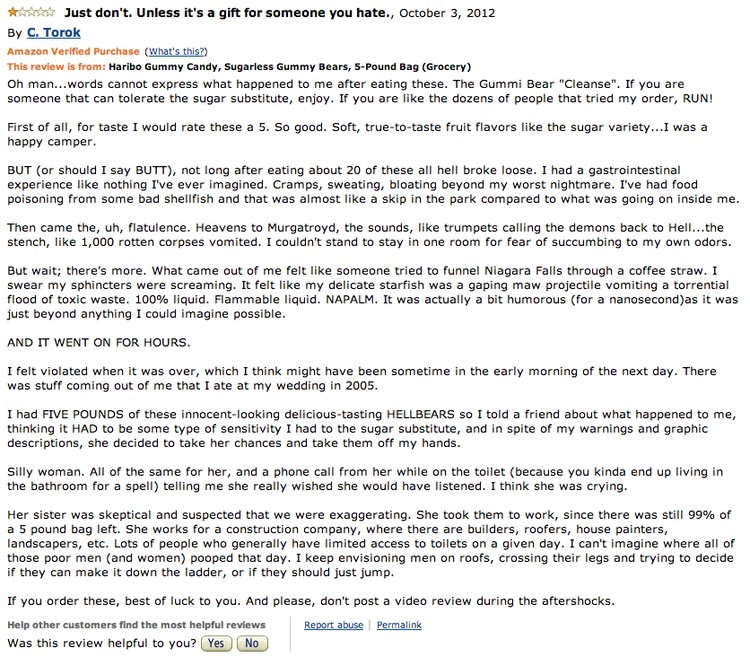 Makes you wonder, doesn’t it? Did Eric feast upon these little turd-Nagasaki-in-the-making treats before his interview? Wouldn’t that be the ultimate troll? Fox News should have a whole bowl of these little devil bears in their waiting area for whenever a Democrat interviews on the network. Then make them wait through lunch, just so they’re really hungry. Then put an “out of order” sign on the bathroom. Can’t be any worse than giving Hillary the debate questions in advance, right? And it’d at least be a good bit funnier.

Look, Eric, give it up. You farted. It’s human. Admit it, laugh about it, and move on. It’s only truly embarrassing if you lie about it. Everybody farts. Granted, not on live TV, but hey… roll with it. Make a Fat Bastard joke. “What the Hell? I didn’t eat any corn!” Or “wafting… wafting…” Whatever you do, though, don’t go back to California. With all those fires raging everywhere all the time in the state, you’re a MOAB, a mother of all bombs just waiting to go off. You’ll take California from roundabout the fifth circle of Hell straight to the ninth. The lesser demons would banish you to the domain of Lucifer himself, saying something along the lines of “fuck, dude, that smells like you sold your ass to the devil.”

On second thought, head to San Francisco, will ya? The political Right wouldn’t mind buying you a ticket, supplying you with the carbon offsets so you can preen about it, giving you some nice cigars and one of those big torch lighters to ensure a proper smoke.