The Enduring Myth of Christian Hatred of Science

This morning a friend of mine posted this meme: 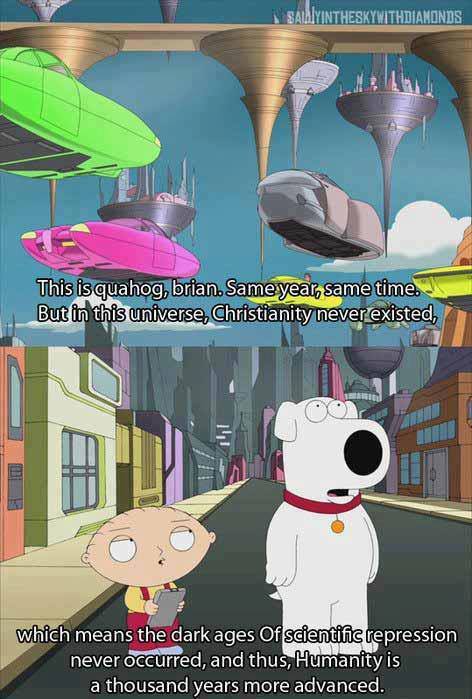 This is the enduring fallacy of our age. Christianity has a myriad of problems (not the ones the media commonly tars it with, however), and the hostility between certain branches of it and modern anti-theist scientists is well documented today. But historically it was very different.

When the Roman Empire began to fall apart with the Germanic invasions of the 5th century, the Roman economy took a hit. Cities were damaged, farms were looted or destroyed, and economic collapse happened in the West. In the 7th century, the arrival of the Arabs did even greater damage to the economy of both the Eastern and Western halves of the old Roman world. Trade stopped, because the Mediterranean Sea, long a secure trade route for Rome, became rife with pirates, first the Vandals, and then the Arabs.

Literacy dropped like a rock. Look at old Roman cities. Graffiti was everywhere, a sign that even the lower classes had some level of education. Whereas after the Germanic and Arabic invasions, even Charlemagne could barely read and write well enough to sign his own name. Even Kings were often illiterate (they had more important things to do — like killing people to preserve what was left of their countries). The lower classes were lucky if they could grow enough food to survive.

The Dark Ages were so called because of the economic collapse, not because of religious doctrine. In fact, the Church was one of the sole surviving remnants of literate Western culture in those days. Classical works were preserved and copied faithfully by Christian Byzantine scholars (it’s worth noting that the Muslim Arabs looted their copies of the classics from the Byzantines, so much for the supposed Islamic golden age). Natural sciences were held in high esteem in Western monasteries, where such luminaries as Thomas Aquinas practiced their philosophical and scientific inquiries.

There was little economic capital to spare, and so science advanced far more slowly in those days, but it DID advance, specifically in areas such as metallurgy and farming implements. Rome’s more primitive metallurigal knowledge is probably one of the reasons the industrial revolution did not happen in that period, despite overall Roman engineering prowess.

Now, the Renaissance came, with old Byzantine knowledge flooding Western Europe. The combination of the rediscovery of those works, and the nascent university and library system evolving out of the monasteries, caused scientific advancement to pick up the pace again. The Church funded much of this activity directly — it didn’t burn scientists at the stake or anything, it paid them!

This proceeded all the way into Galileo’s time where he received most of his funding from the Pope’s office. Indeed, Galileo fell afoul of the Church because he deliberately insulted his patron in one of his publications, not because he believed Copernicus and heliocentric theory (remember, it was a theory at the time — the prevailing scientific view was not heliocentric, and only later would Galileo effectively prove it to his fellow scientists). Even with all that, Galileo was not burned at the stake or anything, but he was put under house arrest and deprived of his former patron’s money. I often ask anti-theists to give me the name of one scientist burned at the stake by the church. I’ve yet be provided with even one example. Yet the myth endures, nonetheless.

However, this is when you start seeing the first glimmerings of the Church and the Scientific Community parting ways. Contrary to common belief today, it was not so much a matter of religious doctrine as it was of politics. Christianity was splintering into various factions, and it wouldn’t do to be a paid agent of the Catholics in, say, a country full of Protestants. And so the primacy of doctrine over more practical matters became established. It was a way to differentiate the Catholics from the Anglicans and the Lutherans, and so on and so forth. The notion of a centralized Catholic Church funding everything died in the Reformation and Counter-Reformation.

Even still, most scientists were Christians even after all that, but funding from the Church began to dry up, and was replaced by private secular concerns and universities, which often still had some theological connections, even then.

The split has grown wider in recent years, and now there is hostility between many scientists and many Christians, but it wasn’t like this until recently, and wiping Christianity from history wouldn’t mean we’d be any further along today than we already are. Indeed, it may have the opposite effect, for during the so-called Dark Ages, if the Church hadn’t preserved what it could of the past… who would have done it? We might have had to start over from much less.