The Continuing Moral Decline of the Political Left

Unless you’ve been living under a rock lately, you’ve probably heard about the Sarah Nyberg affair. Milo Yiannopoulos goes into detail on this issue far better than I possibly could. The short version is, Sarah “Butts” Nyberg, a transsexual, was outed as a pedophile who distributed child pornography and described her desires for her 8 year old cousin in despicable, disgusting fashion on an online forum she owned. She then admitted to many of the charges against her, but dismissed them by saying she had changed, and was no longer an “edgelord.” Right.

What you may not know is how the Social Justice Warriors responded to these charges. But my readers won’t exactly be shocked, either. The Left’s capacity for depravity is well-documented on The Declination. Phil Sandifer, self-proclaimed Post-Modernist Marxist Occultist, weighs in:

Not to be outdone, #Gamergate critic, and former NFL player Chris Kluwe Tweeted pictures of his own daughter to a pedophile, because The Narrative ™ must be protected at all cost. Yes. He sent pictures of his child to a pedophile. What kind of sick bastard would do such a thing? But these two paragons of morality, who constantly lecture us on our evil Capitalist ShitLord, Racist, Sexist, Homophobic, Rapist ways are only the tip of the ideological iceberg of depravity. Salon, naturally, decided that this was a great time to post an article defending pedophilia as a “sexual orientation” and not some kind of filth or evil.

The agenda, of course, is to force acceptance of this practice onto the population at large. And after pedophilia, what next? Soylent Green? There appears to be no floor, no bottom, to Social Justice evil.

But it gets worse, for child pornography and pedophilia are only two tiny drops in the Progressive bucket. In Sweden, a gay pride parade was organized, and it so happened that the proposed route went through two Muslim areas of town. Naturally, this created conflict because Muslims don’t like gays. They aren’t “homophobic” in the sense that they might find the practice odd, or would prefer if it took place someplace else. No. They kill gays. They hang them, they throw them off of buildings, they behead them.

So an LGBT group entered the fray to weigh in on this subject. Who did they back? Who wins when victim group meets victim group?

Islam won. Yes, the LGBT group accused its own people of being racist Islamophobes for daring to conduct their parade through an area of town in which Muslims resided. Leftists called each other racists and bowed to the wishes of militant Islam. Of course, Islam has a long and colorful history where pedophilia and rape are concerned too. In fact, one of the points of agreement between the Left and Islam is that child rape is no big deal, and wanting to have sex with your cousin is just dandy.

When Islam comes to our countries in force, when the guns come out and the chants of Allahu Ackbar echo in our streets, will the Leftists now clamoring in defense of pedophiles rally to defend their own homes? 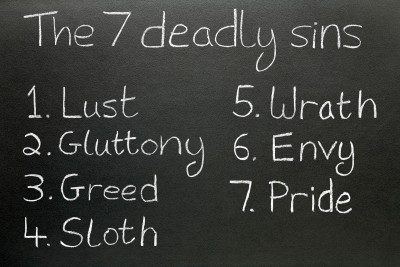 The Progressives champion every one of these.

No. They will do as the LGBT group in Sweden did. They will recite the words that the Muslims demand of them and become good little Muslims, for they are cowards who have no testicles, no spine, no will to fight. They will surrender as soon as violent resistance comes for them. They are worse than Nazis and Stalinists, for at least those two groups, as evil as they were, were willing to fight. The Progressives are equally as evil, but almost comical in their farcical lack of fortitude. They have every vice. Greed. Sloth. Gluttony. Lust. Hubris. Envy. Wrath.

Do not treat with them. For if the Progressives fail in their quest to wreck Western civilization, they will take it over and surrender it to the Muslims at the first opportunity.