The Changing Face of Evil

Today’s post is short but not sweet. Vox comments on an abomination of the worst order: the murder of infants. No, this is not an anti-abortion post, although most of my readers understand that I do not approve of that practice.

No, this is “ethical experts” declaring that smothering a newborn infant is not only justifiable, but a potential good to society. Where abortion covers thorny moral territory, where there are cases it might even be defended as a lesser evil (I do not defend it as such, but I can understand the argument), the deliberate murder of infants has no possible justification. The debatable moral Rubicon has been crossed well before that point. This is the worst sort of evil conceivable. It is a violation of what makes us human and even the mere thought of it is enough to produce physical revulsion.

This is my son, Jacob. He is less than 6 months old. If someone harmed him, using justification of this nature… well, let us say that I am well armed. 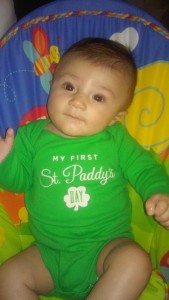 What sort of person can look at a child and think “killing him would be fine, ethically.” The changing face of evil has emerged from the shadows. It walks openly among us.