Anyone who says “all cultures are equally valid” is delusional. Some cultures cannot abide prosperity in others. They cannot countenance the existence of cultures other than their own.

Today, in Paris, 12 people have been murdered by Islamic terrorists. Why? Because their newspaper dared to make fun of the prophet Mohammed. In America, today, it is fashionable to make fun of Christianity and publish scare stories about how the separation of church and state is in danger from fundamentalist Christians. But say what you want about them, they didn’t kill anybody when someone dropped a crucifix in a jar of piss and called it “art.” Even the deplorable, universally loathed Westboro Baptists have at least avoided murder. But no, not Islam. 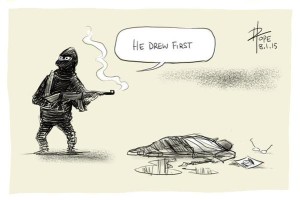 This isn’t an isolated incident either. In France, on New Years, 940 cars were torched and riots rocked the country, mostly from Muslim minorities. This was actually considered an improvement, because last year, they torched a lot more cars. These aren’t wine drinking, cheese eating French people burning cars. It’s all Muslims. And why? Because the French were kind enough to let them in their country? This isn’t just a French problem, either. In Sweden “youth” (the codeword for Muslim) riots are very common. Muslims are set to become 40% of the Swedish population within a decade and a half. At this rate, there won’t be a Sweden in few decades. It will be a colder version of Arabia.

European prisons are full of Muslims. People talk about ‘Rape Culture’ in America, but in Europe, there is a real Rape Culture: Islam. But it’s politically correct to regard Islam as a “religion of peace” and the terrorists as morally equivalent to the LDS guy annoying you with pamphlet literature about God.

Adam Carolla has something to say about that:

And now, Obama’s press secretary delivers this little gem about the attacks in France this morning:

If it does turn out to be an act of terrorism we will condemn that in the strongest possible terms, too.

I’m not a fan of the French, but in this… we stand together. Wherever there is terror in the world today, the odds are strongly in favor of finding Muslims behind it. This is common sense.