Technocrats and the Worship of Intelligence

Consider this post to be something of an expansion on the concept of the Brahmandarins. Technocracy is one of those things which sounds perfectly good on the surface, but can lead to absolute tyranny in short order. For those who are unfamiliar with the term, technocracy is, in essence, rule by technical elites. For instance, your media would be run by trained, credentialed journalism experts. Politicians would be groomed and educated to be leaders from an early age. You could not, for instance, be President if you did not attend the proper schools, earn the proper certifications, and demonstrate a certain set of requirements, like IQ, or perhaps an impressive set of grades in your debating classes.

In The Shape of Things to Come, H.G. Wells describes the Dictatorship of the Air, a prototype for technocracy. He was rather more bullish on the idea than I am.

Naturally, none of these technical elites would need to consult with you and I on these matters. If you are not one of the elite, you would need to be quiet and accept the rulings of your superiors.

The flaws in technocracy are very obvious, to any who care to see them. First and foremost is the matter of trust. Even if we were to concede that the trained, technically-minded elites were better than the hoi polloi, how could one be assured that they were not pulling the wool over the people and taking advantage of them? After all, just because you’re intelligent doesn’t mean you’re honest.

Similarly, being able to design and build rocket ships does not confer upon you the ability to manage and run organizations of rocket scientists. It’s a known problem among STEM folks, and a problem I suffer from personally, that technical ability and management ability are often mutually exclusive. I couldn’t manage brothel in Thailand with a US Navy aircraft carrier in port. But I can write and engineer software all day long. The intelligence and talent I possess is suited for certain things, and ill-suited for other tasks. Nobody would ask me to be a therapist, that’s for sure.

Lastly, and perhaps most importantly, technocracy denies a voice to the peasantry. We’ve tried that before. We call it feudalism and those feudal elites were called nobles. They knew themselves to be more intelligent and better-suited for leadership than those dirty plebs. Why, they could afford a costly scholarly education for their children, when desired, and the rag-wearing farmhands could not. And there was the Divine Right of Kings to consider, also.

What prompted this screed? Tom Nichols posted a long-winded series of tweets about how he is irritated that the Internet exists, and gives voice to people he regards as stupid. Observe:

I can’t really escape the conclusion that for most people, the internet has been a bad thing. In many ways. I was in my 20s when the internet arrived, and I loved it. Especially the way it could link me to other scholars and resources. And the internet, like gunpowder or nuclear energy is a boon. Except in the hands of people who misuse it. Which is nearly everyone.

His Twitter series begins by explaining that while scholars like him can properly use the Internet, it’s bad in the hands of nearly everyone else.

It’s made the world smaller, sure, but mostly to create less distance for bad information to travel and nuts to find each other. It’s also been the spark for an epidemic of relative deprivation that is destabilizing our democracy. It’s also encouraged our worse impulses. The internet’s dark side has likely broken up more relationships than whiskey and cards. And instead of democratizing information, it’s created a buyer’s market for stupidity delivered at the speed of cable.

Tom explains that the Internet has broken up more relationships than whiskey and cards. This is something I find fascinating, because so far as I can tell, no evidence exists for that. Surely, if Tom is right, we would see a spike in the divorce rate around the time Internet usage became widespread. Take a look at this chart, do you see a spike around that time? 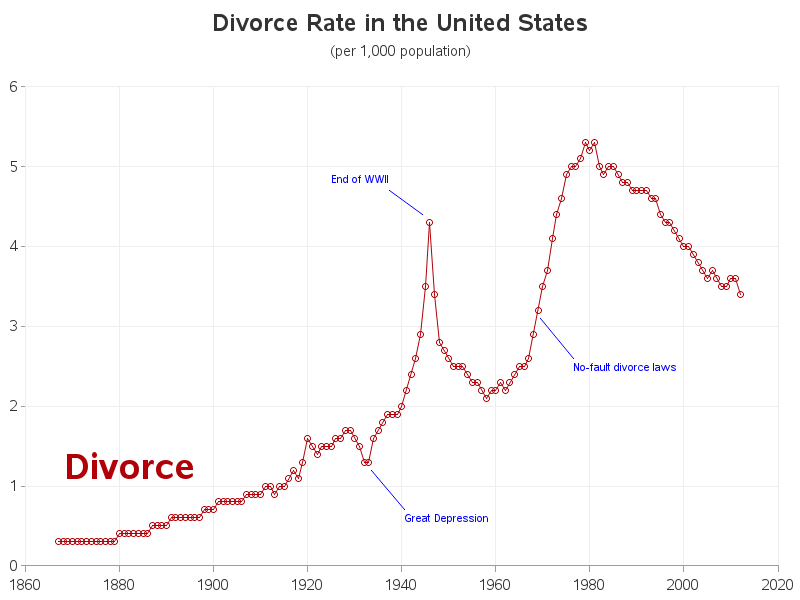 If Tom’s hypothesis is true, we should see divorce rates skyrocket around the late 90s to early 2000s. We see nothing of the sort. I’m just armchair quarterbacking here, but my thought is the phenomenon Tom talks about, things like pornography, cheating sites like Ashley Madison, social media leading to the reigniting of old flames… all of that is counterbalanced by easily-available marital and relationship advice, dating sites that allow people to select from a wider pool, and other boons. Thus the trend that already existed before the Internet more or less continues.

Do I think people were better off having to read a book and only having 4, 10, or even 15 channels? Yes. It’s even made us (including me) phobic about being out of touch with each other for just minutes. (WHERE’S MY PHONE?!) No quiet time. So, while I love the internet, I think it’s been a dangerous, anti-social development in an affluent society that can’t handle it. And yet, here I am, because this is the new public space. For better – or mostly – worse.

Tom is telling us that the world was better when a few media giants had exclusive control over the flow of information. Major publishers decided what books would be published, and what was permissible for authors to say. Major media outlets decided what was news, and what wasn’t. They decided which opinions were sanctioned, and which ones were wrongthink. Everything you saw, read, or heard was carefully screened by technocrats.

However, the phobia he speaks of is a real phenomenon, mind you. This obsession with being constantly connected has had detrimental effects. People can’t put their phone down. They can’t close the social media window. This is the trouble with folks like Tom Nichols, and technocrats in general. They are right about some things, even a great many things, and so stock is placed in their opinions and expertise. The best lies contains elements of verifiable truth, the better to hide the lie. But is it possible this flaw, like the others noted above, might also be counterbalanced by something else?

Fact is, the Internet is my area of expertise, not his. I’ve been writing software and building websites and applications since the mid-90s. I see the user research data. I built user interface layers by the hundreds (maybe more? Hard to remember them all now). So by the logic of the technocrats, by Tom Nichols’ own commentary on the death of expertise, he ought to listen to me on this.

The Internet is a vast and complex system, and its ad hoc nature makes it very difficult to make the kind of judgments he’s making. It would be like saying cars are bad, because of stupid drivers, car accidents, pollution, etc… Cars certainly impose costs, but they also supply benefits. Would people be driving them so often if the costs were truly greater than the benefits?

The same holds true for the Internet. I once opined that Gibbon had to spend a lifetime travelling Europe to do research for his opus The History of the Decline & Fall of the Roman Empire. It was, quite literally, a life’s pursuit. Today, the research for such a work could be conducted on your Kindle. You could find, purchase, and download books instantaneously. Many of those books may have been denied by major publishing houses for various reasons. Perhaps the author was not politically correct, or perhaps his particular conclusions were not in vogue at the present moment. Or perhaps they were blatantly incorrect, but the researcher wants to highlight the bad data so as to better show the good.

Either way, Gibbon would have loved the Internet.

Tom Nichols can pine for the restoration of the old gatekeepers, the highly-placed technocrats who determine what may be said, and where. He can imagine himself as an arbiter for the flow of information. But all the pining in the world will not bring them back. They are gone, and for better or worse, Tom needs to get used to this idea. And truly, it’s not a bad thing, overall. At worst, it is neutral. But I, for one, believe it to be a great boon.