I do acknowledge that, in an adrenalin-fueled moment, SOME women can do amazing feats of strength. See this link – the daughter involved is described in the news as ‘skinny’, but she is not. She’s a basketball player, taller than the average women, and clearly NOT an ectomorph.

The Hollywood Reporter is THRILLED that the new Terminator movie is filled with femmes, and describes them as ‘muscular’.

Decide for yourself. I can’t see the muscles, just women who are more slender than the norm for women their age. 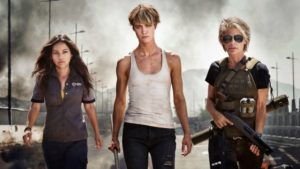 If faced with fighting slightly above average men – say, 220 # men in reasonably decent shape – even with guns/ammo, those women are toast.

Sure, they might be able to get off some shots early. For argument’s sake, let’s assume that 1/2 of them reach their target.

If the men have ANY experience with weapons, it won’t take long for the women to fold. Even with modern weapons, it takes some arm strength to lift them up and hold them steady for an extended time period.

The guns are METAL – and HEAVY. To use them for anything more than a short session takes a fair amount of strength in the arms. It’s one of those things that limits women’s utility in combat.

They also can’t carry as much ammo and other equipment as the men.

Sure, they can defend a position, if necessary.

Over time, the equalizing effect of guns diminishes, and it becomes a matter of endurance. As fighters get tired, their muscle strength diminishes – yes, even the guys. Women don’t have the strength to lose.

Women in combat have some serious deficiencies.

On the other hand, women have some advantages, too, particularly in shooting rifles.

A sensible combat scenario would put women where they excel – as a backup defense, as snipers, and as support specialists.

Not as an all-female team who plans to ‘kick ass’.