Language pollution is everywhere, these days. Words are twisted and deformed, meaningless jargon invented and spewed as if they carried some kind of intellectual weight, as if the purveyors of nonsense could simply will English to be whatever they wished it to be. Newspeak is fast becoming ubiquitous. But where Orwell wrote that Newspeak was a fixed goal, a language in which crimethink would be impossible, the truth is that SocJus language will forever shift based on the political whims of the moment.

Once gay meant happy, and then it meant homosexual, and eventually it was deemed offensive. Fat once meant overweight, then it was offensive crimethink, then fat became healthy, beautiful, and superior to those skinny women who just needed to eat more hamburgers. To some extent, flexibility in language is normal and to be expected. Languages shift and change over time, such that whatever language the Anglo-Saxons originally spoke evolved into Old English, and from there to Middle English, and so on.

But SocJus hijacks the process to create confusion. In one article, a woman lamented that she was “fart raped.” This is jumbled nonsense. These are words which make no sense when strung together. But the author wrote that men who fart in her presence are raping her, and justified it through some kind of intersectional feminist queer theory (more absurd nonsense). It’s like when the politically correct term of the month is invented for some protected class. Handicapped people are “differently abled,” whatever that means. Blacks are African Americans… except now they aren’t, they are People of Color. Tomorrow, perhaps they will be the Melanin-blessed.

Who keeps track of this jargon, anyway?

Take a look at this example:

“Racial Justice” is a made up term. It means nothing. It is an absurdity. Justice is explicitly an individual concept. Guilt or innocence is decided on an individual basis. If it is racial, it cannot be justice.

Also, an “assault” on communities of color? More absurdity. Word salad. Assault requires violence. If I punch you in the face, that is assault. Not joining some international club because of a disagreement on climate statistics and their economic impact… that cannot be assault, unless someone takes a computer running a climate model and beats you over the head with it.

This is my biggest irritation with Progressives. They pollute language with meaningless nonsense, and then expect us to have to defend ourselves against the resulting verbal diarrhea.

It’s enough to make me want to assault them in a very real and correct sense.

But it doesn’t stop there. Here’s another one: 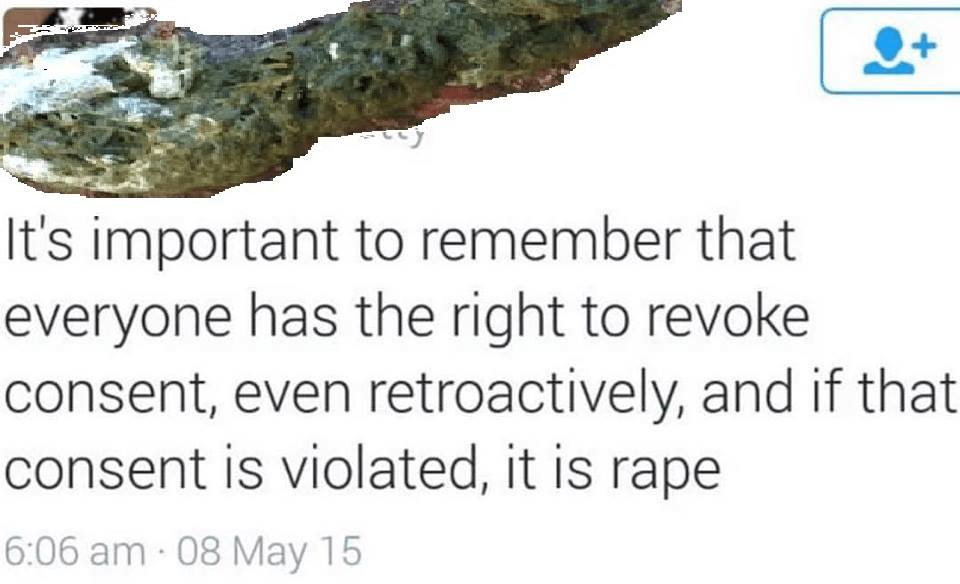 So now, sexual regret is conflated with rape. The distinction between them lost, as this SJW attempts to redefine “rape” to be whatever she wants it to be. Perhaps if she orders a cheeseburger at McDonalds, and receives, instead, a hamburger without cheese, she was McRaped. But here’s the interesting thing, this word-bending relies upon us, that is to say non-SJWs, granting the same weight to the word “rape” that we would grant to an actual violent sexual assault. In other words, if a woman regrets having sex with a man, this man must be treated as if he attacked a woman and forcibly had sex with her.

Spectacular example of doublethink, isn’t it? The SJW holds both meanings in his mind, and selects the meaning which will most benefit him politically in any given circumstance.

This is why debating SJWs is an exercise in futility. You will never be able to agree even upon the meaning for the words you are ostensibly using to communicate. Even supposing the SJW were to grant the meaning of a word, he would change it whenever it suited him. 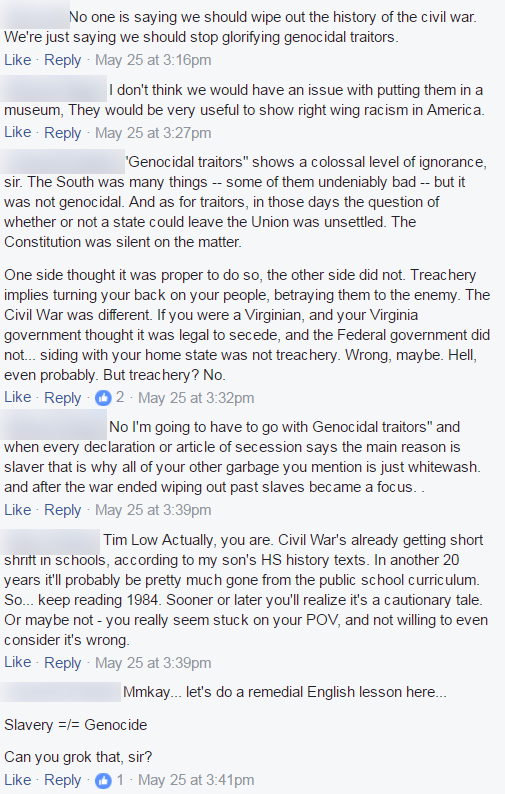 Exchanges like this are fascinating. Note that the SJW uses the term “genocidal traitors” to refer to those who fought for the Confederacy. He naturally takes offense when it is pointed out that slavery and genocide do not mean the same thing. Genocide sounds worse, and was thus politically useful for him to bolster his argument with fiery rhetoric. Yet these are words that do not mean the same thing. The American South certainly was guilty of perpetrating slavery. It was not guilty of committing genocide. After all, if your goal is to have productive plantations, you don’t slaughter all of your slaves.

Some paragraphs later, he tried to weasel word his definition of genocide to fit slavery, in the same manner miss fart rape tried to make passing gas a sexual crime. All of this is language pollution, the deliberate stripping of meaning from words in an effort to serve a political narrative. Notice, however, that the SJW still wants genocide to be assigned the same moral weight as the actual meaning of the word would imply. In the grand scheme of things, genocide is a heavier crime than slavery, so to make slavery seem worse, the SJW equates them. That only works so long as you allow him space in your head, that is to say if you use the proper definition in your calculations, but allow him to slide on his misuse of the term.

All of this, of course, was in an effort to equate the Confederacy with the Nazis. In the world of SJWs, everything they don’t like is defined as Hitler, Fascist, or Nazi. This is, perhaps, the most egregious violation of language pollution. Donald Trump, for instance, might be accounted as a Nazi because he did not want to commit the United States to the Paris Climate Agreement. Given that Nazis were a specific political party in Germany, one that wished for conquest and actual genocide, I fail to see any connection between Donald Trump’s stance on climate change and whatever the Nazis were doing.

But, again, while they trivially cast any person they don’t like as a Nazi, they expect us to assign the moral weight of actual Nazis to the accusation. We are supposed to be horrified and immediately purge someone the moment a finger points at a person, and someone says the dreaded word. More doublethink. SJWs are fully aware that most of the folks they accuse of being Nazis have no connection whatsoever with the ideology or the political party. But it is politically useful rhetoric.

Here we see that though Islam is not a race, and Vox.com is fully aware of this fact, they still wish to cast opposition to the religion as racist. Again, it is politically useful for SJWs to do this. Note that you never see these SJWs claiming the opposite, that it is useful to think of Christianophobia as racism. Note further that even the word Islamophobia is an absurdity. How many of us are afraid of Islam? Opposition to Islam is subtly implied to be fear, and then this fear is then implied to be racial fear. All of this is done through language pollution.

Consider this phenomenon from a mathematical perspective. If Genocide and Slavery are the same…

So the SJW gets to bolster his “500” to “1000” for free. His argument is automatically granted more weight because of his slippery language. He gets the difference, 500 points of credit in his favor, as a freebie in the argument. Then he can claim that Confederates were Nazis, and anybody arguing for Robert E. Lee’s statue to remain is arguing for a statue of Hitler. Anybody who flies a Confederate flag is flying a Nazi Swastika. Regardless of where you stand on the matter of Lee’s statue, this is an absurd argument, and it should be dismissed as dishonest and foul.

But it should also bring back memories of the famous saying from Nineteen Eighty-Four:

Humans are remarkably capable of rationalizing pretty much anything. It’s a problem all of us face by virtue of being human. But where the SJW differs is that he does this rationalization with the conscious purpose of advancing his political agenda. You or I, dear reader, may be guilty of this by accident. We may do it without realizing we are doing it. We may, on occasion, even catch ourselves doing it and fail to stop. But the SJW? He sets out from the beginning to do this. This is his purpose. It is no mistake, it is no error. It is intent.

Thus arguing with them truly is a waste of time. But if you ever find yourself in a situation where you must, look for the language pollution. It is there. It is pervasive. You will find mountains of it. The more regular folks become aware of how they’ve been led astray by this deceitful little tactic, the more angry they will become. And it will be a righteous fury, indeed.