SJWs Need to be Punched in the Face

Paintball used to be a hobby of mine, and it’s still something I’d like to get back into if I can find the time. I suppose it’s the closest thing to real combat you can get without risking bullet holes. Oh, I don’t mean the sort of paintball you see on TV all the time, with inflatable targets and kids dressed up in sponsorship uniforms. No, what we played was called “mil-sim” or “woodsball.” You had paint grenades, paint mines, paint mortars, forts, trenches and the like. Since I never joined the military as the rest of my family did, it was the closest I could get to any sort of combat training.

Some battles would last all day. Paintballs are generally too short range and inaccurate to warrant an actual sniper position on the team, but I was the closest thing to one. I had my ghillie suit and souped-up Tippman A-5 marker with a 20 inch spiral-ported ceramic barrel, remote line and high-capacity nitrogen tank. Combined with high quality paint, it was the most accurate and consistent marker I’ve ever fired.

Those were fun times. You’d fight all day, and by the end of it, you were covered in bruises, cuts, and scrapes, as much from the terrain as the paintball hits. You had to have your wits about you, out-think the enemy, and concentrate completely on the battle. Nothing else existed but the drive toward victory. I remember after one particular day at the field, coming home and laying down, with images more or less on repeat, playing again and again in my mind. Sometimes I’d win, sometimes I’d lose, but there was something to that battle that reached me at an instinctive level.

Most of my male readers will understand what I’m talking about. Violence is innate to us. It grants a visceral satisfaction that life otherwise cannot provide for us. I’ve been in a few fist fights in my life, and those, too, were similar. Win or lose, after the fight was over you had a better idea of who you were.

Know thyself, they say. Only a man who has fought in some capacity can truly know himself. Or, as one particular writer put it, Never Trust Anyone Who Hasn’t Been Punched in the Face. When you look at the faces of SJWs who appear to have no clue whatsoever about life, you’ll note that they typically do not show scars, or the thousand-yard stare prevalent among military veterans. They don’t even show the sweat and bruises of a day at the dojo, or a particularly brutal paintball match. You do not see the SJW walking funny because he pushed himself at the gym or on the treadmill. Worse, they don’t seem to have any understanding of these things. Indeed, if they look hurt, it is most often because somebody called them a name. 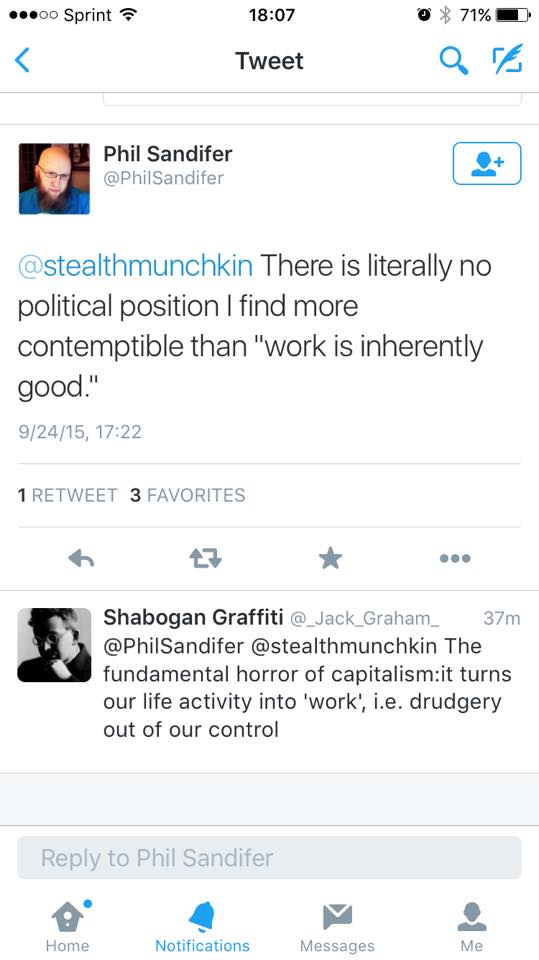 Here is a man who desperately needs a punch in the face. His friend, too. Both of these men are so far gone that they view the concept of “work” with contempt.

For the Left tends to dismiss all violence as fundamentally evil. They even regard talking unpleasantly on the Internet as some form of “Cyber Violence” for which the UN prescribes censorship and licensing schemes. Violence, in truth, is a morally neutral event. The reason for the violence is what makes it good or evil. A caveman who spears a deer to feed his family has committed a violent act, yet the act is good for his family. Similarly a man who kills a bear that threatens him has done violence, yet also done no wrong. Men are built to fight, to hunt, to kill, and to defend. Violence is in our nature.

My best friend since middle school and I once got into a violent fight, so bad that I quite literally threw a chair at him after having been gut punched. He went down. Five minutes later we were laughing, the origin of the fight forgotten as we cleaned up the broken remnants of the furniture I had destroyed. Another time, I had been running my mouth at someone I should have left alone. I chalk that one up to high school stupidity. But, whatever the reason, the ensuing fight and  resulting knot on my forehead from the other kid’s fist, taught me an important lesson about self control.

My point is, something gets broken in men who have never experienced violence, in either a defensive or offensive capacity. “Men” like Phil essentially never come into their own, never advance past puberty, because they are too unfamiliar with violence. They have not been punched in the face enough, nor have done much of the punching. They’ve never been in a knock-down, drag-out fight to the finish. They play no paintball, serve in no militaries, and many of them even decry the existence of violence in video games.

Eventually they become like the UN, decrying even the mundane normalcy of Internet trolling. Sticks and stones may break my bones, the old nursery rhyme goes, but names will never hurt me. Except that according to the SJWs the names are hurtful, and terribly so, for they require state action to correct.

This idiot has it exactly backwards. He doesn’t need feminism, and his concepts of being a “nice guy” are functionally equivalent to being a pussy. He needs to go to a dojo and get his ass kicked, and learn how to be a man.

Any man who has experienced a punch to the face, or a kick to the ballsack, understands that being called a name is not so bad. The man who survived IED attacks in the bush would laugh in the face of the most offensive, nasty trolls the Internet has to offer. For such attacks pale in comparison to seeing your friends blown to smithereens before you very eyes. Even the lowly blogger who got shot in the ass a few dozen times by angry opponents across the paintball field understands that someone telling him he “sucks” is such a minute thing, such a trifle, as to not even merit a reply. Except, of course, if the taunt is levied across that same field. Then the proper response is to shoot your opponent in the ass, so as to prove him wrong.

Something about a man’s worldview will forever remain incomplete until he gets his ass thoroughly handed to him. He’ll be a boy, with no concept of how the world works. Men are disposable in a certain sense. If one is killed, another will take his place. One man and a thousand women could perpetuate the species, but the reverse would mean extinction. The world doesn’t care about him, or his feelings. He is not a special snowflake, and all the Gaia worshipers should note that nature herself is violent, and cares nothing for your emotional state.

The bear will eat you whether you are depressed or not. He doesn’t care about your genitals, or your pronouns, or how many Social Justice causes you have tweeted about. He will kill you and eat you if he can. You have to prove the bear wrong (a .45 might do the trick). The world is full of bears, from terrorists to violent muggers who will kill you for your phone. You have seen them before in your life, and you will see them again in the future. The man who has fought does not fear the bears, however.

Instead, SJWs tilt at windmills. Twitter trolls and channers are considered the worst of the worst. The man who supports capitalism is evil, the anti-Marxist reactionary is terrifying. I suppose if you’ve never dealt with the bear, puppy dogs might seem scary to you. Progressives have gone so far down this lunatic path, they have declared that the old childhood game of tag is too violent, too unsafe, to be countenanced any longer. The school district justifies this act by saying that the game endangers the physical and emotional safety of children.

Why not just put them in little padded rooms, I wonder?

Pajama Boy here has a smug little grin, a self-righteous look of mild disdain, as if the world just isn’t quite good enough for his presence. A punch to the face would correct this illusion.

On a positive note, I feel that sooner or later, Phil Sandifer will inevitably piss off the wrong person. That’s how the world works. Maybe that person will just be having a bad day, or maybe he’ll be looking for a Social Justice Warrior to beat down. Whatever the cause, Phil will feel it and, if the world is fortunate, he’ll learn something from the experience. If there is justice of a true variety, it will replay in his mind again and again, like a brutal day at the paintball field often does for me. And with that punch to the face will come new awareness: being called a name on the Internet really isn’t that bad. And, more importantly: the world is not, and never will be, a utopian fantasy of rainbows and unicorns.

It will be violent, and cruel, and dark. But, not necessarily fatal if you are adequately prepared for it.

The movie The Princess Bride sums up my worldview well enough: