SJWs: Deconstructing Everything Until Nothing Remains

One of the amusing things I’ve noticed about Social Justice is that they frequently accuse regular folks of cultural appropriation and sort of skimming the surface of other cultures, picking and choosing what we want and dispensing with the rest. And yet, they engage in this very same behavior themselves. Observe: Atheist pastor sparks debate by irritating the church into the 21st century.

An Atheist is leading a Christian church, and she admits freely that she is picking and choosing the things that she wants, and dispensing with the rest:

Vosper was ordained in 1993, during which she was asked if she believed in God, Father, Son and Holy Spirit. She said yes, speaking metaphorically.

Some eight years later, vexed by the archaic language, imagery and stories of the Bible, she delivered an off-the-cuff sermon in which she deconstructed the idea of God. “Our hymns and our prayers and the way that we did things, they all reinforced this idea of a supernatural divine being who intervened in human affairs,” she says. “I just took it apart – I was not willing to continue to let (my congregation) think that I believed in that kind of God.”

She deconstructs God in a Christian church, then eliminates all of the symbols of the religion in her own domain, covering up the cross in rainbow streamers, getting rid of the Bible, and delivering sermons bereft of any reference to God or Christ. She retains the outward forms, borrowing the format and appearance of a Christian church, and Christian culture but has stripped it of any meaning whatsoever.

Some time ago, SJWs complained that white yoga practitioners do this, that they have appropriated the outward forms of another culture’s belief system and stripped it of all meaning. But we may at least say of most yoga practitioners in America that they do not claim to be representatives of Indian religious practice, and do not practice their art in Indian temples, under their auspices. They just do their weird physical activities and call it a day.

But no, the SJW is not only practicing a form of blatant hypocrisy, they demand official recognition for their work, and demand that Christians accommodate and submit to them.

What followed was years of Vosper and her congregation retooling the service at West Hill. References to God and Jesus became talk of love and compassion and prayer was replaced with community sharing time. The removal of the Lord’s Prayer in 2008 proved to be a critical test, sending attendance plunging from 120 people to 40 and leaving the church’s financial strength in tatters. “The Lord’s Prayer was the last thing in the service that still held them to previous generations of church,” says Vosper. “So it became the lightning rod for all of that loss.”

Throughout this time Vosper couched her strong beliefs in linguistic gymnastics, describing herself as a non-theist and, later, a theological non-realist. In 2013, moved by the case of Bangladeshi bloggers facing persecution over their reportedly atheist views, Vosper began calling herself an atheist. “I felt it was an act of solidarity,” she says, likening it to the use of the word feminist to in the 1970s. “If I shelter myself by not using that term, that’s unfair to everyone who is being maligned by the use of that term.”

Why does she insist on being accounted a minister? Why does she practice this… whatever it is she’s doing… in a Christian church? She could go out and preach her feminist linguistic gymnastics, and declare herself a theological non-realist and non-theist someplace else. But no, she insists on doing that in a Christian framework.

The decision to carry out the review upsets many at West Hill. “It’s disgusting,” says Wendy Hyland. Her husband, Jim Hyland, calls it hypocritical, given that the congregation is one of the few in the area that has managed to buck the wider trend of declining attendance. “West Hill is the future of what religion will be like,” says the 65-year-old, highlighting its metaphorical interpretation of religious symbols and emphasis on environmental and social justice. “We’re thinking and saying what the rest of the world is scared to, but moving towards.”

First off, this article contradicts itself. Earlier on, we are informed that attendance dropped from 120 to 40. And yet we are now told that it “bucks the wider trend of declining attendance.” What a load. But aside from that, look at how this is being twisted. The “future of what religion will be like” is explicitly categorized as Social Justice.

There you have it in black and white, folks. Social Justice is, indeed, a religion. But like the Xenomorphs in the Alien movie series, this foul, corrupted parasitical belief system gestates in a Christian church, and then eventually kills the host in its birthing. Indeed, it’s instructive to view all Social Justice activity this way. They come into an organization and attach themselves to it, nourishing themselves and eventually killing the host, birthing an aggressive, evil and horrendous mockery of the original organization from the dying remains. 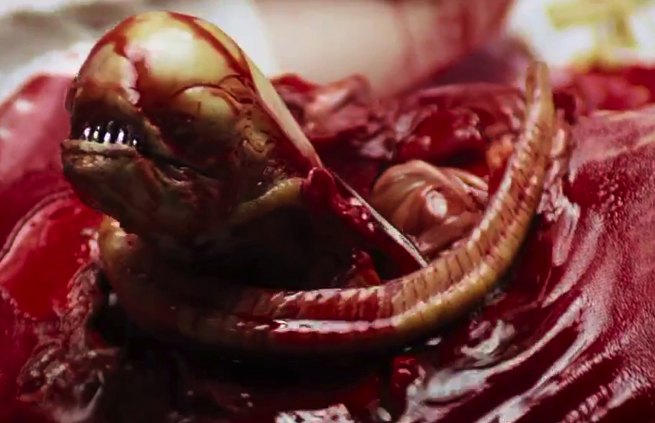 This is what Gretta Vosper really looks like, underneath the skin. This is how SJWs propagate their ideology, hijacking a host and destroying it in their own birthing.

Why would any Christian church willingly countenance such a parasitical evil to develop within it?

The Toronto conference of the United church responded to the concerns last year, saying it would carry out a review to determine whether Vosper was being faithful to her ordination vows and whether she could stay on as minister. “There are very strong opinions from those who support Ms Vosper, and from those who reject her statements absolutely,” said the Rev David Allen of the Toronto conference.

This shouldn’t even be a discussion. Expel her immediately. She is not a Christian. Now, it may be perfectly permissible for a non-Christian to sit in the pews. Indeed, we desire this, how else can we reach others? But it should never be permissible for a non-Christian to lead a church. It’s so blatantly obvious, so utterly common sense, that I cannot even fathom how this is a debate topic.

May a non-Jew lead a Jewish congregation? May a non-Muslim lead a Muslim congregation? Would a pagan church allow a Christian to lead it? Why then for the love of Christ (and I do not make this invocation lightly) does anyone think it is okay for an avowed Atheist to lead a Christian church?

The sheer level of idiocy approaches comical proportions. And while the notion may very well be hilarious in a gallows humor fashion, the ultimate result is pure evil, because countenancing this can lead to only one result: the destruction of the church itself.