A few Twitter posts got me thinking, as I am wont to do, about the history of Western civilization and ethnic separation.

You see, around the birth of Christ, or not long after, China and Rome were mirror images of one another. Both were multi-ethnic Empires that were in the process of uniting into a single ethnic state. Indeed, China’s own historical records contain a dim awareness of what they called Da Qin, the opposite-China on the other side of the world. In typical Eastern philosophical tradition, they considered this quite natural, that the world would be balanced by two great civilized Empires on either side of it.

Rome brought together the previously disparate cultures of the Mediterranean under one banner, sending out colonia to gradually assimilate the native populations. It replaced the old Celtic traditions of Gaul and Iberia. It assimilated all of Italy. It was somewhat less successful in the East, where Greek continued to predominate. But, among the Romans, Greece was considered a sort of second Rome (more literally so later, in the form of Constantinople or New Rome), near enough to be considered a part of the same cultural stew. Most educated Romans also spoke Greek, and most educated Greeks also spoke Latin.

In history, Rome stands out as the only time the Mediterranean was unified under a single banner. It is a dream that has motivated many since, from Justinian to Charlemagne to Napoleon, all trying to bring together the feet of clay and iron once more. According to the Bible, this will never happen, though it may seem to almost happen, from time-to-time.

Whether or not you believe the prophecy, that has held true. Rome has not been reunited. But why?

There are many reasons, but in my own long research into the topic, a few notable items stand out.

1. Islam.
2. The Germanic notions of freedom.
3. Assimilation was incomplete.

China went on, under the Tang dynasty, to consolidate the gains and restore its Imperial hegemony. Rome, however, found itself facing a bolt from the blue that no one could have foreseen: Islam. 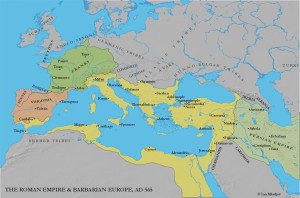 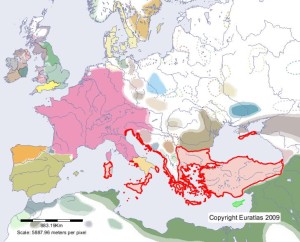 Rome after Islam: a vestigial Empire, a remnant. A soon-to-be-split Frankish Empire, and the East Roman/Byzantine Empire centered around Constantinople.

Islam sundered the unity of the Mediterranean, leaving the successors of Rome in the West to fend for themselves. Even the distant Franks had considered themselves notionally “Roman” in some vague sense, before the advent of Islam. Afterward, everything changed. Trade halted because of Islamic piracy. Bastions of ancient civilization, like Syria, Egypt, Carthage, and Iberia vanished in the flood. Islam, for a brief moment, consumed those cultures and economies in what revisionist historians call “the Islamic Golden Age.”

And then they were gone forever, and the unity of the Mediterranean with it.

China never had to contend with something as civilization-destroying as Islam. Even the Mongols could not compare.

Nonetheless, a dim cultural memory remained. The monuments of Ancient Rome continued to fascinate the inhabitants of Europe. The Catholic Church remained, the last remaining Roman institution, planted on the grave of the old Empire. Latin and Greek continued as the languages of learning. France and Spain were at once the same, and yet different, such that one can speak of “Western” civilization, and yet know that the French are not the Germans, and neither are the Spanish or the Italians.

Da Qin never unified quite the way Qin did, but remained the opposite end of the civilized world even so.

The second reason can be attributed to the Germans. Contrary to today’s image of the Germans as an industrial people, engineering marvels fascinated with order (terribly so during the time of the Nazis), the Germanic ancestors of Scandinavia, Germany, etc… were actually obsessed with notions of freedom, so much so that the Romans found them more or less unconquerable. Various attempts to bring them into the Roman fold failed.

Germans loved their freedom too much.

When the German tribes were pushed into Rome by the marauding Huns, they brought their notions of democracy with them. These were not the “enlightened” notions of the Athenians, but rather a more rough-and-tough affair. German tribal Kings were not elected in any sort of fashion you or I would recognize as such, but any King which did not have the support of the warbands would not be King for long. They would simply assassinate him, or follow another King instead.

We speak of Goths, or Vandals, or Lombards, but ethnic boundaries among them were thin. A Gothic lord may switch to following a Vandal King, or a Lombard. They voted with their feet.

They had long lived on the borders of Rome, however, and had absorbed much influence from it. Contrary to the images presented by High School textbooks, these “barbarians” were Christian and reasonably civilized, in their own rough-and-tough sort of way. But they could not abide the Roman Imperial institutions, at least not without being forced to do so.

Combined with the guilds, price controls and manorial lifestyle already pioneered by Diocletian and Constantine, this set the stage for the Middle Ages, in which there was little in the way of clear boundaries between one nation and the next. Indeed, Kings were valued more for who followed them than for the territory nominally under their control. Feudalism was “voting with your feet” taken to an extreme.

Had Roman Imperial authority not been broken by the Muslims, it is possible the Germans would have been slowly integrated into Roman political life. Instead, they were cast off from the dying Empire, left to fend for themselves over the remnants of the old Roman system.

The combination produced an interesting contradiction in Western European culture. The earliest German successor states, like Ostrogothic Italy, Visigothic Spain and Frankish Gaul all shared a common trait. The Germans were ruled by one group of laws, the predecessor of the type of law we call common law, which is governed mostly by tradition: i.e. what was ruled on previously, and the Romans were ruled under the old Imperial system, created over time by the rulings and dictates of government (later codified by Justinian).

Westerners simultaneously worship the Germanic notions of freedom, almost in a tribal-like capacity, while still yearning for the next Caesar to come along and “make them great.” This produced bizarre class and cultural divisions that persist to this day. Even today it is possible to perceive the remnants of this division in any Western nation-state.

To this day, there is a sort of “us vs. them” mentality in Western socio-economic classes. Indeed, the Slavic/Eastern-European world suffers the same, since they also shared a similar experience from the dying Byzantine Empire.

So the assimilation of the invaders never happened in the Roman world, like it did in the Chinese world, which absorbed Huns, Mongols and Manchus with impunity.

Rome partly assimilated Germans and Slavs, respectively, but never finished the job, leaving the old Roman world under a sort of meta-culture which persists to this day, but in a perpetually divided state.

The Iron and the Clay do not cleave.

And, ultimately, the blame for this lies at the feet of Islam. Both Western and Eastern European cultures ought to understand one thing: Islam is their enemy. It has been, and always will be. And furthermore, the importing of Third Worlders is diluting the old Roman world once more. All this will accomplish is further division, more war.

No Multi-Ethnic Empire has ever survived in the long run. Rome. Ottoman Turkey. Austria-Hungary… they all fall. Americans should take note.