Rage Against the Dying of the Left

Chernobyl has nothing on the meltdown of the Left. Their collapse has been swift and dramatic, even as their fruitless rage grows greater. Donald Trump must be doing something right to have inspired such emotional temper tantrums among the defeated.

Their chants sound like cultists worshiping a Golden Calf. “He will not divide us,” they repeat as mantra. Love-peace-hope is everywhere, except when they torch cars, break into buildings, punch people, and burn anything they can get their paws on. Heaps of garbage are thrown onto the streets, as the mob dresses up as genitalia and screams about how nobody should grab said genitals. 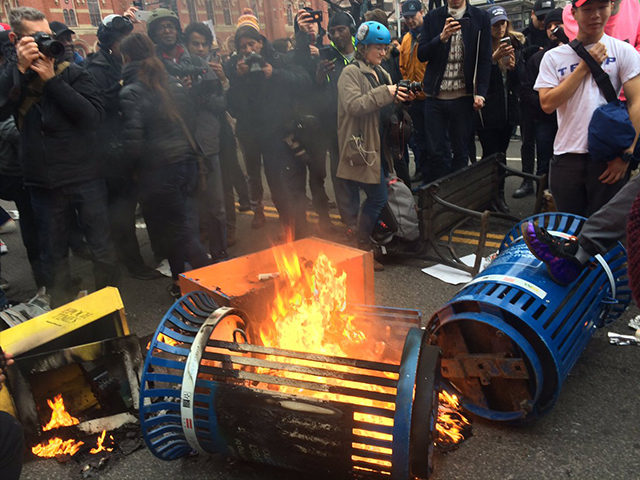 What did those trash cans ever do to you? What do they have to do with Donald Trump?

These people are raging incoherently, now. They have no agenda except to express how angry they are. They are toddlers, screaming in the cereal aisle because mommy said no to the box with the toy inside.

Trump is Hitler. Worse than Hitler. Trump is Emperor Palpatine, Lucifer, and Adolf all rolled into one. He will destroy the Earth, slaughter millions in war, kill all the gays, turn women into sexual property, and make America into something… well, something resembling ISIS-ruled territory, actually. Except ISIS is okay, because Assad is a bad man and Islam is just wonderful. Or something. 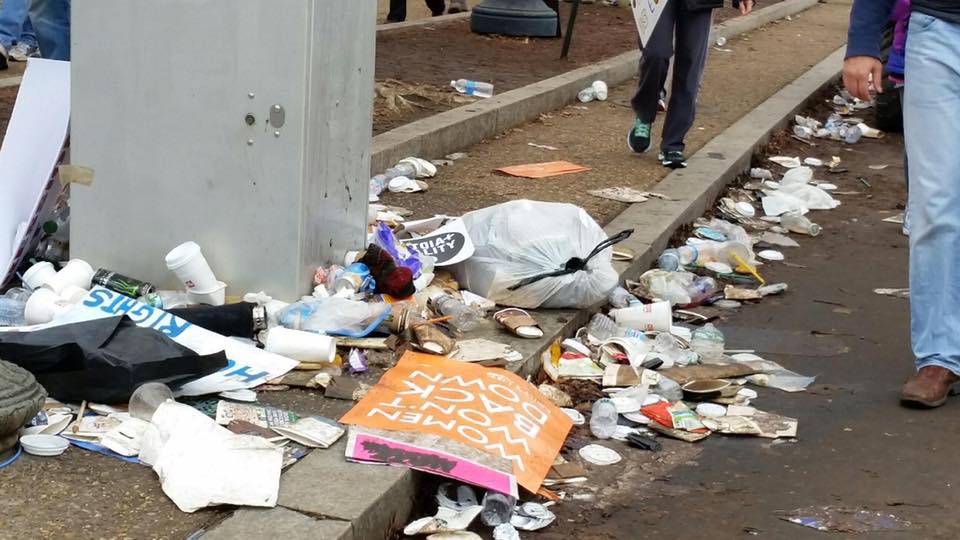 Male privilege is having to clean up after the Women’s March turns our nation’s capital into a dump.

What is this really about? Well, it’s quite simple, really. In the book The Emerging Democratic Majority, we were all told that Leftist rule was inevitable. They didn’t say it so clearly, of course, but immigration and demographic changes in America would finally defeat Conservatism for good, and the dawn of the Marxist utopia could come.

Leftists were convinced of this, and the razor-thin 2000 election seemed proof that the Republicans would be unable to mount a challenge after Bush II was gone. Obama appeared to be further evidence of this, and his easy defeat of both McCain and Romney signified that the Republicans were over. Oh, sure, they could still mount challenges in the legislature and governorships, but even that was only due to the off-year election cycles of Congress. That would fade soon, too.

Hillary was their moment of victory. It had finally come. She was a chance to take the courts, the Congress, the Presidency, the whole kit and caboodle. Permanent Progressive majority had arrived. They were so excited. You could feel their anticipation. The Right wing would be gone forever, the inevitable dialectic of Marxist history would have been vindicated after all these years.

This all ties back to earlier American history. You see, American working class folks never really signed up for the full Marxist treatment. Sure, FDR’s New Deal won many of them over. They wanted a strong safety net, some big government projects to work on, and some other boons. I don’t agree with them on these things, mind you, but they wanted them, and FDR gave them what they wanted.

Marxists thought this was a sign that the American working class could be made into good Communists. But, lo and behold, they were satisfied with the New Deal. A little safety net was satisfactory. They didn’t want any more Socialism. They were more centrist than anything, and didn’t care for Communism in the slightest. They would never agitate for the Stalinist and Maoist Communism the far Left loonies not-so-secretly adored.

By the 1960s, it became clear that America would not become the Soviet Union so long as it remained America. So the path forward for Progressives was clear: replace them. Immigrants were imported not because of what they could contribute to America, or how much they wanted to be like us. They weren’t even brought in because Leftists liked them, or wanted to do good by them. The immigrants were used cynically as extra pawns on the electoral board. They were imported to be good Leftists, and to eventually unbalance the scales so that America could become like the Soviet Union.

Even long after the Soviet Union entered permanent residence in the dustbin of history, the Leftists continued undeterred in their transformation of America.

And November 8th, 2016 was supposed to be the ultimate moment in this effort, the grand finale, the storming of the gates. Their love for Socialism is so intense that the only Democrat who could mount a challenge to Hillary was Bernie Sanders, someone arguably even more Leftist than she.

Something else happened on November 8th, however. The working class, and a fair number of minorities, wised up to the game. They knew they were being used by the Democrats, that they were being thrown aside in favor of a radical program they never signed up for. Their defection delivered the Presidency to Trump and kept the Congress in the hands of the Right. Not because, it should be noted, that they (or even Trump himself) are sudden converts to Conservatism, but because the Left has gone so far Left that they feel closer to a Conservative than to a Liberal.

And now Trump is dead set on stopping the very mechanism that was supposed to give the Left a demographic lock on America. What’s more, they know it. That is why they are so angry. That is why they are so emotional. They don’t care about Trump’s tax policy, or whether or not he will stimulate the economy. All they care about is that their plan to takeover the country was foiled at the last possible moment.

They don’t know what to do anymore. They are helpless, watching as Trump shatters their secret weapon. They had a great dream. First America, then the world. Global Socialism could finally come, and humanity could bathe in the golden Marxist utopia forever, bereft of reason, wealth, and achievement. Every human being could be exactly the same as the next, the same vacuous, parroting, androgynous, sexually-confused, blue-haired idiot with a host of mental illnesses and disabilities. They would all be ideological clones.

Now it’s all falling apart. Brexit, Trump, and nationalism emerging from the Marxist stew like a tidal wave, sweeping all before it. Love or hate the nationalism, it is achieving one important thing: the rapid destruction of the Left. Yes, it carries with it a host of other problems that we’ll have to remedy. When you drop a nuclear bomb, you’re going to have to deal with the fallout.

But so many on the Right have long since stopped caring. Our schadenboners stand at full attention, because we are so exhausted of being crapped on. We’re so tired of the nuts running the nuthouse. Almost anybody looks sane next to these cretins.

Empty platitudes are everywhere, but they have no plan, no focus. The media relentlessly attacks Trump, and Trump shrugs it off. They advance the Doomsday clock to the worst point since 1953 because… Trump doesn’t sign off on Climate Change. Yeah, because that’s worse than the height of the Cold War, where the possibility of nuclear annihilation due to idiotic political decisions was very real. 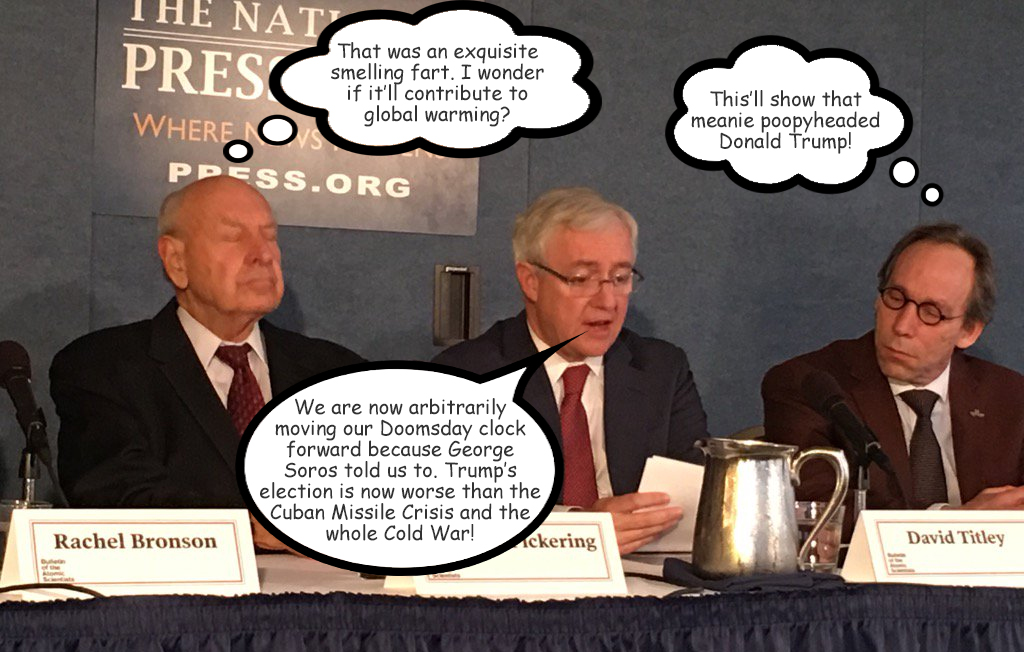 No partisan bias here. Move along.

They are throwing everything but the kitchen sink at him, and nothing even phases him. The Wall is coming, the immigration ban from Islamic conflict zones is already in place. TPP has been jettisoned, and they are powerless to stop him.

Antifa thugs roam the street dressed in black, assaulting whomever they please, claiming that everyone except them are Nazis, seemingly unaware of what their own behavior suggests. They will spew the most idiotic platitudes, like “thinness is white privilege.” As if not eating yourself into obesity has anything to do with your skin color.

I said it during the election process, and I’ll say it again. I was never a big fan of Donald Trump. But it doesn’t matter anymore. He’s a bludgeon to beat the Left with, he’s a brick wall they throw themselves against repeatedly. He’s decades worth of built-up schadenfreude unleashed in karmic fashion upon a party of smug idiots who thought this could never possibly happen, for they were on the right side of history.

They are raging against the dying of the Left.

My own schadenboner has grown to epic proportions, and shows no signs of slowing.