This post is going to be offensive. You’ve been warned.

When it comes to commentary, you might say I possess two modes of expression. The first, which most of my readers are familiar with, is the rational, dialectic-focused method. The other is the rant-and-rave side, which often wanders off into the offensive, radical, and bizarre. If you are one of those who used to listen to Dr. Dystopic’s Love Line, you’ll be familiar with that. This post is of the latter variety.

At any rate, the inspiration came to me while on the john, hence the title. It is fitting that the topic of Progressivism frequently crosses my mind when I’m handling nature’s rather unpleasant business. And today’s was a doozy. Never eat greasy Pepperoni and Italian Sausage pizza after consuming leftover Chinese food for breakfast. The results are about as painful as listening to John McCain speak about “compromise” with President Obama. The content is fundamentally similar, too.

In simple terms, Progressivism is sh*t. Pure, unmitigated bullsh*t. Its practitioners are intellectual and physical cowards, unable and unwilling to state their true agenda because they know their position is bogus. Take a look at this response by two cowards dancing around an issue that shouldn’t even exist: Should White Men Stop Writing? The Blunt Instrument on Publishing and Privilege.

Both individuals are White, and they both go back and forth on their perceived privilege relative to “POC” (the prog shorthand for People of Color). In the end, the Elisa Gabbert, the responder, finishes by saying that the writer shouldn’t really quit writing, but should probably handicap his chances of success so much that nobody reads what he writes.

In the context of Sad Puppies, and Scalzi’s $3.4 million deal with Tor, this is particularly amusing. So White Men shouldn’t write, unless they are John Scalzi, and thus… you guessed it, privileged. Except somehow it is okay when Scalzi does it, and not when this anonymous plebeian dares to write about his self-obsessed, guilty notions of oppression to another self-righteous turd masquerading as a legitimate advice columnist.

There is absolutely no consistency with Progressives, and that is, perhaps, the most irritatingly obnoxious fact about them. They have gone beyond the Orwellian, in which good is evil, war is peace, etc… and into a world where words do not mean anything. Literally, that article was nothing but a waste of Latin characters, a circumlocution in which the columnist states that a writer should read and write, but nobody should read anything he writes, defeating the entire purpose for which the alphabetical system was conceived. 4374 words were wasted in this effort.

Using letters is for People of Color. Or is it POC? I don’t know about you, but I would find being called “POC” offensive. It sounds a lot like POS… yes, you know what that stands for. Misha discovered another potential use for the acronym: Product of Conception. Because apparently calling it a fetus is too honest. No. A bullsh*t term must be conceived (pun intended) in order to not only justify the death of a child, but to actively celebrate its occurrence, and portray its practitioners as brave.

Meanwhile, on the subject of Progressivism as the Intellectual Toilet of Politics, here is what they recommend for an unwanted baby born alive: flush it down the toilet. Misha calls them sh*tstains and I can think of no more appropriate term for Leftists.

They are so brave, in fact, that they are literal baby-killers. It was born alive, prog-sh*ts, you can’t weasel your way out this time. What if the baby is non-White? It is a Product of Conception, a Person of Color, or both?

Meanwhile, while the murder rate in New York City is up 13% this year, the police have other matters to attend to, like the practice of some subway riders to take up more than one seat. A coworker of mine, who used to live in the United Kingdom explained that one of the MPs there recently instructed women who are being raped to submit promptly and eschew self defense, so as to avoid injuring the rapist.

Why? Because in European countries, rapists are frequently POC, or more accurately, Muslims of Middle Eastern origin. So while idiot American college students haul mattresses around defending a woman who invented a false claim of rape, actual rape victims are supposed to just grin and bear it. But the subway riders are a priority that require a special investment of police resources.

Progressives worship victims, and yet eschew actual victims for the imaginary variety. One woman intends for her genitals to have a vote, and would proudly vote for Hillary Clinton even if Satan personally showed up and declared her to be the Anti-Christ. Why? Because she is a woman (something Bill seemed to disagree with, to some extent), and thus a victim, despite enormous wealth and political power. Hillary Clinton’s campaign, in the meantime, has collected something on the order of $500 million in foreign donations, something the voting public chooses to ignore. 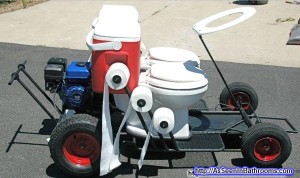 Hillary Clinton’s campaign might as well be represented by this contraption. You’re going to need more TP to clean up this turd. Three rolls are insufficient for the task.

It’s all sh*t. It’s meaningless. One of my favorite Science Fiction works, Isaac Asimov’s first Foundation book, features a politician who spends an entire section of the book qualifying his own statements, such that when analyzed after being recorded, the other characters are astounded to realize that everything cancels out. He said nothing, and did it so well nobody noticed. Every politician today seems to have mastered this particular skill. Their bureaucratic minions are expert in its use as well.

The point is simple. They intend to dominate every single moment of your life. Does that seem extreme to you? Several years ago, it would have been considered extreme that the NSA had backdoors in every single Internet appliance. We know how that ended up, right?

I feel like this most of the time. I warn people, then years later they’ll say “I’ll be damned, you were right.” But then they ignore what I’m saying today.

So I’m going to tell you what the Progressive Sh*t really is in the most simplistic, honest, open terms possible, and let you decide for yourself what the proper response is.

1. The extermination of Whites. This may extend to other less-favored racial groups as well.

2. The implementation of a Totalitarian, Semi-Omniscient, Socialist State.

3. The elimination of differences in any measurable capacity. Think Kurt Vonnegut’s Harrison Bergeron.

4. The confiscation of all of your money, possessions, and time.

5. The complete enslavement of men, excepting those of non-traditional sexual inclination, which may be tolerated.

6. The creation of a privileged Elite Aristocracy, to whom none of these rules apply, and to whom $3.4 million contracts are doled out like candy, while others are told explicitly to expect all of their work to go unnoticed and uncompensated.

7. The micromanagement of all social interaction in the name of ending “Microaggression.”

8. The final end to the implementation of any standards whatsoever.

In other words, the Left desires to turn you into a real victim, an animal, possessing neither agency nor conscious purpose. If someone desires to beat you to death, you must allow them to do so. If someone wishes to rape you, they must countenanced. If the government impoverishes you, it must be accepted. You are cows, headed for the slaughter, and the trail has been seasoned with bullsh*t.

I’m going to steal the famous quote at the Anti-Idiotarian Rottweiler: F*ck Everything. The End.