Pretending to be Something You’re Not

A woman I’ve known for some time is fond of making great declarations of intent which she’ll never follow through on. Once, she explained that she was going to go to medical school and become a plastic surgeon. “Lawrence,” she told me, “I’ll look you up when I’m living up the good life.” I’m not sure if she expected to create some kind of jealousy in me, or if she really believed all of this and was trying to be gracious to her friends. But, a few months later, her goal to become a plastic surgeon had been completely forgotten.

You see, a new movie had come out, the recent adaptation of The Great Gatsby, and this woman had decided that bringing back flapper fashions was her new and great cause. Later, of course, this would be forgotten and set aside in favor of some other ambition. After a time, I simply ignored her statements and just nodded my head politely whenever she spouted off her latest life dream. She returned to her life as a live-in nanny in a modest home.

She is a Progressive, at least so far as her limited political outlook can be said to be anything. Bernie Sanders memes fill her Facebook wall, and she is quick to express her disapproval of Republicans. For whatever reason, I have been granted an exception for being “pretty smart” and “something of a dick, but kinda funny.” But her forbearance doesn’t extend much beyond me.

To be fair to her, she’s actually a very intelligent woman, and I suspect if she truly desired to be a plastic surgeon or a fashion designer, it would be within the realm of possibility. But I also know she’ll never be any of these things. Like most people in modern America, her attention span is abysmally short and nothing ever seems quite good enough to her to be worth real investment of time, effort, and resources.

Americans like her are everywhere, and when presented with the evidence that they have failed in life, they cannot bear the shame. They will insist that they really are fashion designers, or video game developers, or whatever else they wished to become. Zoe Quinn of #GamerGate fame presented herself to the world as a video game developer, even though the extent of her professional experience was writing the outline for a text-based game no more complicated than a Word Document, that she then handed to someone else to code. 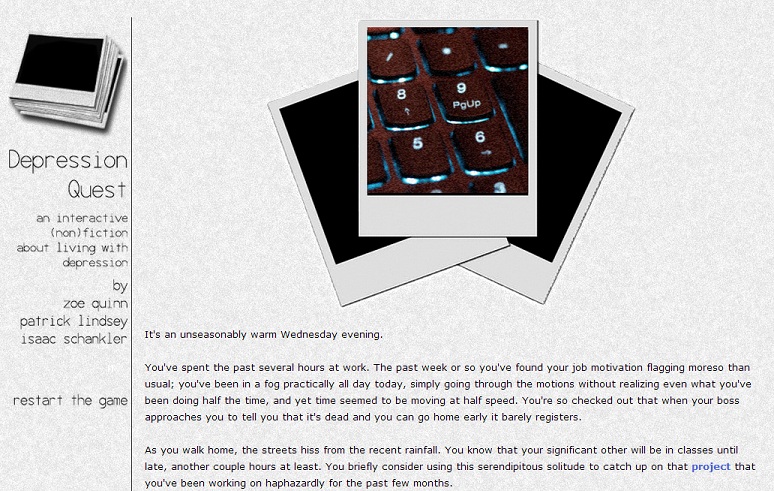 If this is a “video game” I’m an Oscar Meyer Hot Dog.

I remember someone once questioning whether or not I was a DJ, because I was not personally known to him (as if only famous DJs were real DJs). I explained that I’ve been DJing in night clubs around my home region since around 2005 or so. I have a regular residency at one night club, and a quarterly regular gig at another. I spin guest gigs 3 or 4 times a year at the biggest and most popular club in my city, and have spun in nearby cities, also. It’s bad enough that my wife gets irritated with me because getting a Friday or Saturday night to ourselves is absurdly difficult to do. My largest gig is the Gasparilla Parade, where I DJ on top of a parade float in front of hundreds of thousands of people.

I’m not famous like Armin Van Buuren or DJ Tiesto, but I am a DJ and have long experience and professional history to back it up.

I’m a little eclectic. Okay, I’m fucking nuts, but it’s a bit of a stage theater — still, DJing as a Crusader Knight was probably way over the top.

The point is, I wanted to become a DJ, and I spent time, effort, and money in order to learn the craft (for those that care, I learned on CDJs but can also mix competently on vinyl — I still have a pair of Stantons for that), obtain the proper equipment, and promote myself. I have to wonder when some Progressive is going to pop out of the woodwork, shove a laptop in front of me loaded with a playlist in Windows Media and say “see, I’m a DJ too, accept me!” If the aspiring DJ is a woman of the RadFem variety, she’ll undoubtedly claim any attempt to belittle her “experience” is blatant misogyny or something.

Before you think “well that’s all just supposition.” No, it isn’t. Everybody seems to think they are a DJ because, once upon a time, someone let them choose the songs at a frat party or, God forbid, they pirated Virtual DJ off PirateBay. Everyone thinks they are the star of the show. Once, a woman proclaimed that it was her birthday, and that the entire club should listen to Rihanna’s Birthday Cake song as a result. She understood the dance floor better than the guy spinning them for a decade, you see, and they all wanted to know it was her birthday. She insisted she was a better DJ than the DJ. After she became rude and obnoxious, threatening to “tell your boss” I decided to play Deadmau5’s Attention Whore instead.

As the crowning refrain hit “I’m a big attention whore” in bimboified tones, I pointed to her and laughed. Suddenly a great big hole opened up around her on the dance floor. Nobody wanted to be associated with her. But the dance floor loved it — they always like a bit of drama, and I was happy to provide. It’s my job after all.

Arrogance is something we all fall into from time-to-time, but we’ve reached new heights with this sort of pretentious garbage. It’s like most of these people believed it when their teachers called them “special” and “unique” in school. But then they get out in the world and realize that, like the Deadmau5 song, they are just attention whores.

Zoe Quinn is no more a game developer than I am a quantum physicist. But she’ll say otherwise incessantly, while refusing to write a single line of code. Randi Harper spends more time complaining about GamerGate than contributing to the FreeBSD world. Phil Fish basically stole someone else’s game and then, ironically, started calling himself a DJ (I watched the video – it was horrible). And then Anita Sarkeesian claimed she was a “gamer” in order to market her videos wherein everything is decried as racist, sexist, and homophobic.

Men pretend to be women. People pretend pedophiles are normal, but Christians are evil. Pundits claim to be impartial journalists. Shaun King is Black. Don’t get me started on Otherkin (you have the soul of a werewolf? Da fuq?). Then I read a headline where a guy was asking why people assume that he’s gay because he’s a guy having sex with men. Everybody is pretending to be something they are not. Words have become meaningless. I guess I’m just waiting for resumes to become the latest “oppressive tool of the Patriarchy.”

People want all the credit for none of the work. And I guess that’s nothing new. The only thing that’s changed is that this has somehow become normalized to the point that telling somebody they really aren’t that is now oppressive and discriminatory. Think I’m crazy? This is really a thing: 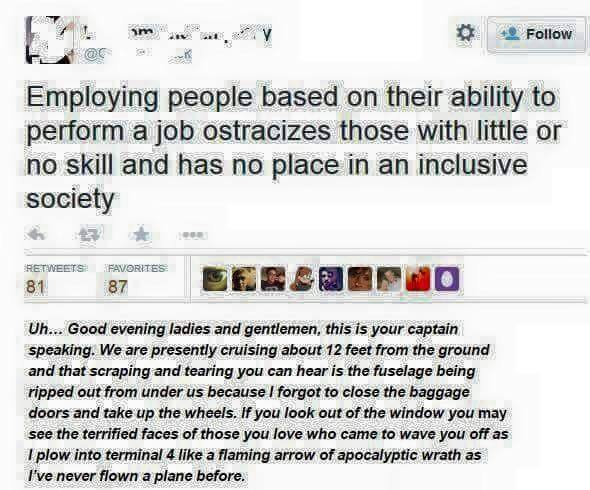 Yeah, how soon will we have to hire pilots that can’t fly and have no experience merely because they said “I’m a pilot.” In my usual morning reading, I came across the history of Captain Sullenberger, the pilot who successfully ditched Flight 1549 in the Hudson River after a bird strike knocked out the engines. When this happened, he had accumulated something like 19,000 flight hours, and described his ability to save the passengers thusly:

“One way of looking at this might be that for 42 years, I’ve been making small, regular deposits in this bank of experience, education and training. And on January 15 the balance was sufficient so that I could make a very large withdrawal.”

We have some carriers that have hired some pilots with only a few hundred hours of experience. … There’s simply no substitute for experience in terms of aviation safety.

Maybe someday, the great goddess of Diversity will demand that Zoe Quinn be hired as a pilot because she said she was one. And, after all, she once flew a bit on her Playstation. This notion of people’s delusions being accepted as fact, merely to placate their feelings, is going to go nowhere good. Watch for airplanes plowing into terminals like flaming arrows of apocalyptic wrath, because feelings.

Next week, I’m sure my friend will say that she is a developer, or a chemist, or a priest. I don’t know. The sad thing is, she is a really good nanny. Instead of pretending to be something she’s not, because it has become fashionable, she could tell the truth and say “you know, I’m pretty good with kids.” But I suppose that’ll never happen.