Politics as a Triangle, Not a Line

Political ideologies and alignments tend to be thought of in two different manners. The first, and most simplistic is the Left-Right alignment. It is a simple line. There are only two sides, but it is possible to be anywhere on the spectrum between the two poles.

This clearly has limitations.

Nonetheless, there is a simplistic utility in the Left/Right alignment. There is something different about those we call Right-wing as compared to those we call Left-wing.

So an alternate method of tracking political alignment was created, a two-axis system, whereby economic freedom is separated from personal freedom. This makes a little more sense.

This makes a little more sense, but still suffers from a problem.

In this, we now see that Fascism is not a Right-wing phenomenon, but more of a mixed/centrist economic system (partially Socialist) combined with maximum authoritarianism. It is now much further from Libertarianism, and much closer to Communist Dictatorship, with which it shares many characteristics. We also see a divide between American Republicans and American Libertarians.

But this system still suffers from a major limitation. People still tend to track Left/Right on this chart. Observe: 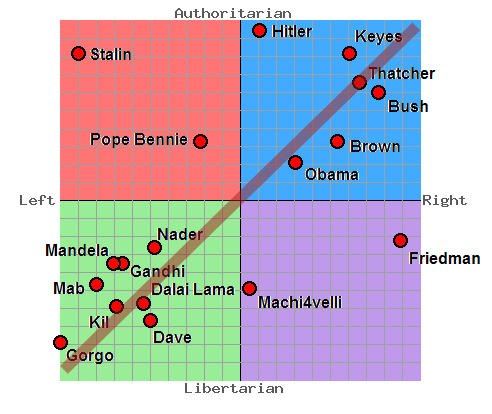 Ignore for a moment that Obama is considered “Right wing” here. This is because other countries are very far Left, even compared to American Leftists.

So, aside from a few outliers like Stalin and Friedman, most of these people still track on a vaguely Left/Right axis. It’s just skewed a little differently than we imagined initially. So there’s something we’re still missing. And before you think this is because of sample size, observe this chart:

Even with a bunch of random people mixed with famous people, we see that vague Left/Right line. So what is going on here?  The simplest explanation is that the two-axis system still doesn’t represent the real ideological spread. But if a single axis doesn’t capture it, and two seems to be too many, what does represent it?

I posit that what we really have is a political triangle. In speaking with a dear friend yesterday, it was explained that European Right-wingers are fundamentally different than American Right-wingers. It’s currently the focus of a point of contention between Vox Day and Sarah Hoyt (both of whom I highly respect).

It occurred to me that the dispute may be partially resolved with the political triangle. Observe: 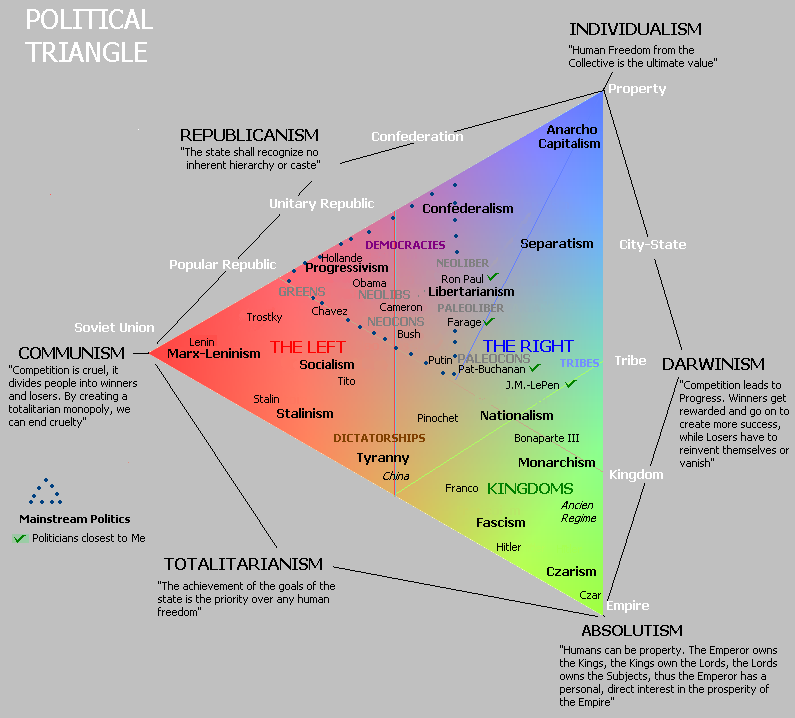 Ah-HA! Now we are getting somewhere.

Now what we see here is interesting, because what we think of as “the Right” is actually two separate and distinct groups. An Authoritarian Right, which is amicable to Monarchism and/or Fascism, and an Individualist Right which, while equally despising the Left, is also distinctly opposed to the intractability of monarchs. In simple terms, if George Washington were alive in the modern age, he would dislike modern Leftists as much as he did contemporary Monarchists.

The American right gravitates more toward the Individualist side, while the European Right gravitates closer to the Authoritarian side. That explains how I can read both Vox and Sarah and, paradoxically, agree with both of their conclusions on this matter.

The Left, however, remains more or less the same. What we think of as Cultural Libertarian Leftists are actually something a little different.

This can also be seen as something a little more simplistic. Replace Communism with “Matriarchy” or “Mother” and Absolutism with “Patriarchy” or “Father.” Then leave Individualism alone, it is exactly that. You will see that, in very basic terms, Communism proposes to be your Mother. All must be provided by the State, who acts as this parent. It is the omnipresent helicopter mother, watching you constantly, ensuring you have the right thoughts, free care, free everything. But it keeps you as a prisoner, also. You can’t play with that. You can’t think that, or do that. All that is permitted is mandatory.

Absolutism proposes to be your Father. As such, it is a more distant sort of power, yet all the more absolute because of it. All that is not permitted must be punished. Absolutism proposes to leave you alone unless you trespass on what are often arbitrary and bizarre prohibitions. And when you break these rules, punishment is ruthless and painful. It is a state which rules by force alone. Obey, or else. But, on the flip side of that, it doesn’t have quite the omnipresent Orwellian nature of the Motherly state either. It doesn’t care if you starve or thrive. In simple political terms, it is perfectly possible for a monarch to also be a capitalist.

C.S. Lewis explains the distinction for us:

“Of all tyrannies, a tyranny sincerely exercised for the good of its victims may be the most oppressive. It would be better to live under robber barons than under omnipotent moral busybodies. The robber baron’s cruelty may sometimes sleep, his cupidity may at some point be satiated; but those who torment us for our own good will torment us without end for they do so with the approval of their own conscience.”

But where the Robber Baron is preferable to the Moral Busybody, it is not a good. And just because it is the default state of mankind doesn’t mean other states are impossible. America managed, at least for a short time, to remove itself from that paradigm. Arguably the Greeks and Romans partially achieved this during parts of their history, also.

Personally, I neither desire a Mother figure, or a Father figure, in state form. In so much as a government must exist, I desire it to perform only one primary function: to keep the country free from either form of tyranny. But if I am required to choose between the Mother figure and the Father figure, I do find the latter somewhat preferable to the former, for the reasons C.S. Lewis explained.

However, again, my friend explained that this may not necessarily be true. Insofar as the Absolutist form of government may be preferable to the Communist, it is also more sticky. Since Communism defies human nature, and categorically must collapse of its own weight of inefficiency, it will fail more quickly and provide an opening for Individualism. Whereas Absolutism can be sustained more or less forever, being the default state of man. Even when an Absolutist government falls, it is most often replaced with a new form of Absolutism. There is a reason, after all, that Francisco Franco reinstated the monarchy.

Indeed, they already are to great extent. Trump gave the Absolutists a figure around which to rally (this is a very new concept for American politics, but more common for Europeans), and they have attracted the ire of the Individualists.

The problem with this? The Communists haven’t been defeated yet.