Part of America Has Chosen… Poorly

Well, the Hillary campaign is most assuredly lying about her primary campaign. She declares victory because she has gone over the require delegate count by the blatant favoritism of her own party, but this is only made possible by the super-delegate practice of the party itself. After all a political party ostensibly named for the practice of democracy has no need for actual democracy.

Anybody who thinks the elites in this country practice what they preach is either a lunatic or in need of serious remedial education at the local school for “special” children.

Yes folks, the Democrats have spoken! They don’t want garden-variety Socialism (bad enough on its own). They want Corrupt Socialism run by wealthy elites. And they say Conservatives are the ones who love the rich. At least Bush II didn’t run around in $12,500 Armani jackets lecturing people about wealth inequality and white privilege. 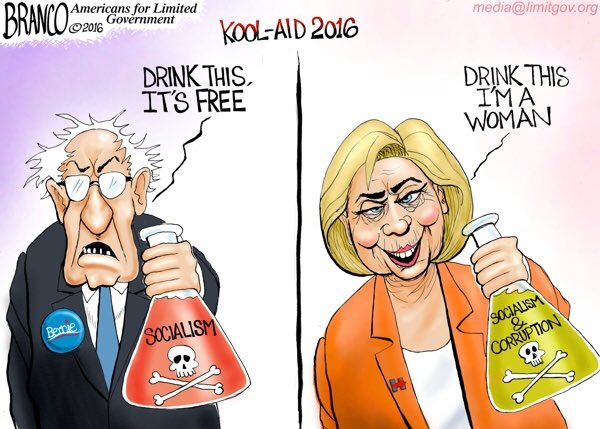 Hillary is worse than her husband who, at least, seemed vaguely American even if he was a sleezy, dishonest, scummy, possible-rapist. Hillary is something else. She is post-American, as if such things as borders, peoples, beliefs, and cultures didn’t exist at all. As if the hoi polloi were beneath her, merely things there to do her bidding, or be dismissed when no longer needed. American citizens were merely Hillary Rodham Clinton’s personal army of servants. Well, hers and those of her immensely wealthy and powerful patrons, anyway.

Only money exists. And her campaign certainly got enough of it. Hillary, naturally, gallivanted around the world, cozying up to dictators and thugs for “speaking engagements” that, at least in some cases, were quite possibly never even delivered (or may have simply said things she doesn’t want outed – who knows?).

Whatever. It’s like she pretends to be human for awhile: 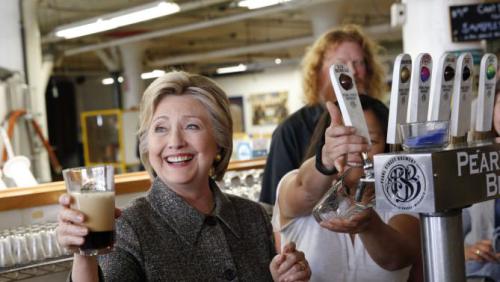 Look at me, I poured a beer like a human being! I’m really one of you! Credits: (AP Photo/Patrick Semansky)

I wasn’t exactly enamored of the raging Communist who opposed her for the Democratic nomination. But one could at least argue that Mr. Sanders may have actually believed in the bullshit he was spewing. Hillary believes in nothing but Hillary. Secret Service agents certainly had some interesting things to say about her stay in the White House during Bill’s tenure are farce-in-chief.

She is a tyrant, a self-absorbed narcissist of truly epic proportion. Anyone who votes for her is either a fool, or is corrupt themselves. Without exception.