Orwell’s seminal work has come to pass. We’ve always been at war with Eastasia. Or Eurasia. Bush is a Nazi, but didn’t we defeat the Nazis? Iran is going to be the great savior of America. This is the same Iran that declared America is the Great Satan. 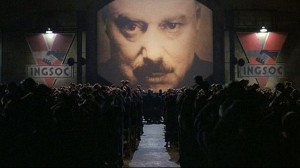 America subsidized Iraq. America was at war with Iraq. America liberated Afghanistan, America invaded Afghanistan. Iran is an evil quasi-nuclear power. Iran is to be the savior of Iraq. Socialism is evil, except now Socialism is good. The same woman who says rap music disgusts her shakes her booty to “slob on my knob like corn on the cob.” Sex with children is a crime, except when feminist authors do it, because they helped so many women (except her own daughter who was raped repeatedly by her mother and step father). It isn’t so much the hypocrisy and the shifting attitudes of the proles that is worrisome. Rather, it is the absolute ignorance of the proles that concerns me. They will do and countenance whatever their masters tell them. They aren’t even moral agents because they have no independent moral compass. Two Minutes Hate on Guns (but more guns for cops to shoot dogs with).

Then there is this doozy: PETA, a group that claims to love and cherish animals, pursues a policy of killing them. They don’t even hide the doublethink, it’s right there on their website.

Every human is a hypocrite. We have all done things which we do not approve. Rather, it is the utter lack of awareness or concern that is, itself, something to worry about. The Left was against bombing in the Middle East, until a Leftist does it. But it’s still not right when Bush did it? There is no coherence, no logic. It’s as if the invention of the DVD meant that VHS never existed. Bailing out banks is wrong, except when Obama does it. Bankers are evil, except the first female to head the Fed.

There are not rules for them except power and the acquisition of more.

We have always been at war with Eastasia. Or is it Iraq? Or Iran? Or Russia? What about Ukraine? Two Minutes Hate on George Bush. He did it. Is it Global Cooling? Global Warming? Nah. Climate Change. All changes in climate are the fault of middle class American white men. Except gay white men. And atheist male feminist authors who dress up like women. Benghazi is no big deal, and it wasn’t a terrorist attack, it was just a youtube video gone wrong. Except it wasn’t.

Give up your nukes, Ukraine. We’ll guarantee your sovereignty. Trade a traitor for 5 enemy leaders. But the Taliban is not our enemy, they are moderates. Moderates that gave aid to terrorists to blow our buildings up. Al Qaeda is an evil terrorist organization in Afghanistan. It’s the loyal moderate rebel force in Syria. Egyptian democracy is good, except when an American leader doesn’t like the result, then it is bad. White men are evil, except gay white men. 4chan’s Father’s Day prank was so believable it actually began to circulate legitimately. Why? Because the pranksters emulated the power-brokers so effectively, the proles figured it was an official Two Minutes Hate and they rushed to get on board.

The non-coherence of thought is evidence that most of the population are proles, and it doesn’t really matter what they say. Now it’s time for the Two Minutes Hate of Donald Sterling, Racist with dementia. Or was that last week?