Musings on a Declining Empire

Black Friday approaches, Turkey threatens to drag the world into World War III, what’s left of American governance continues to slide into moral decay, and the whole shitshow threatens to come apart at the seams. But it’s time for stuff.

There are times when I get in my car in the morning, pop the clutch and trudge down the highway, on my way to a cubicle, 5 by 5, and wonder what the point of everything really is. I don’t live in a civilization that much resembles that of my father, or my grandfather. I hate saying “it was different back then” but in my case, it really was different.

My country is a parody of civilization. Come to Disney. Tour the world in these pathetic little ride carts made in the 70s. It’s a Small World. See the Scandinavian Oil Rigs. Eat some shit thrown together in a food stand by someone claiming to be “international” or something.

Ride past Best Buy and see throngs of people camping out for a good deal on a TV or an iPad. To Hell with spending time with friends and family. Cheap Chinese goods are at stake. They want this crap so bad, they are willing to fight for it, and brave physical harm and arrest in order to obtain it. Worse, groups of people consider it unfair and racist that other groups have more of this junk. Look at him, he has Air Jordans and I have generics. Raaaaacist!

Families, or what’s left of them these days, are a disappearing breed, replaced with the mentality of more free stuff. Cargo ships drop in cheaply made Chinese junk, stuff that will break soon enough and require another truckload of crap to replace it.

Many of the same people saying “save the word Christmas” are among those waiting in line for cheap crap, or slogging down through the bureaucratic paperwork needed to get a nice, steady stream of free stuff from the government.

While all this goes down, Turkey threatens to drag the entire planet into another war. Poking the Russian bear has never ended well for anybody. But go right ahead, drag NATO into an idiotic conflict with Eastern Europe while ISIS runs rampant throughout the Middle East slagging archaeological sites, slaughtering Christians, Jews, Yazidis, and Muslims alike, preaching the Apocalypse.

Brilliant. Because, fellow Americans, your cheap Chinese TV is worth more than paying attention to a world full of people who hate your guts and want to kill you. 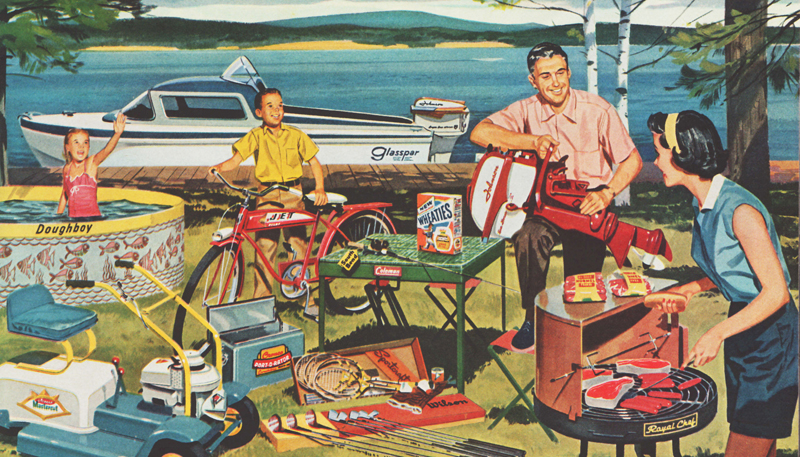 Consume. You won’t be happy unless you have piles of useless crap.

One of my friends on Facebook constantly tells me how smart I supposedly am for noticing these things, but I don’t figure any of this is particularly intellectual or difficult to understand. People just care more about showing off their 55 inch flat screen than they do about the most important thing of all: survival.

It’s like they think It’s a Small World is representative of reality, that the distant throngs of Islamics who absolutely loathe the West are really just singing, happy kids in a Disney ride.

For people who spend so much time and money trying to get High Definition TVs, they sure do fail to understand the big picture. Break out the credit cards, it’s time to buy more useless crap nobody can afford, to support regimes that hate us and want to kill us. The brilliance of the average American continues to astound me.

I am so exhausted of the Rat Race. Stuff, stuff, and more stuff. This isn’t wealth. It’s financial suicide writ large. And I’m sick of everyone saying “the American Dream” as if this were some kind of arcane formula for happiness. You know what the real American Dream was, once?

Being left the Hell alone. That’s right. We hated people meddling in our business so much we went to war in order to put a stop to it.  It wasn’t a house in the suburbs, or 2.5 kids. It wasn’t a cheap Best Buy TV, or name-brand shoes. It wasn’t a Stepford wife, or half a dozen welfare checks.

It was escaping distant authorities who wanted to meddle in your lives, manipulate you, use you, and control you. Americans today have failed miserably at perpetuating this dream, instead replacing it with a retinue of consumer goods, signing at the dotted line, letting the government, banks, and large corporations control their every move.

And they did this willingly. I guess it wouldn’t bother me so much if I weren’t expected to bail them out of their mess, and if they weren’t dragging my country down with them. But they are.

In the meantime, the entangling alliances the Founders warned us about threaten to snare us in NATO’s trap, setting us against the Russian bear, thanks to the actions of a tinpot Islamist in Turkey.

Today’s America bears only a passing resemblance to the nation ostensibly founded after the Revolutionary War. Indeed, the whole of Western Civilization borders on the farcical.

There are days I despair of saving it, because it’s hard to find any life left in the corpse.

But don’t worry. If you believe in Santa Claus, he’ll bring you some cheap Chinese crap at a 25% interest rate.