In the tradition of Rachel Dolezal, White race hustler, we have a new entrant in the trans-ethnic insanity: Shaun King. This man obtained considerable financial gain through his lies, by receiving scholarship money on account of his “mixed-race” heritage and supposed Black father. Naturally, it was recently discovered that his father was White, and taking one look at the man you would figure that his mother, still not released as of this writing, is as well:

After some of the usual Twitter noise, Shaun King finally admitted that he lied about his race to gain scholarship money, but then, paradoxically, claims he has never lied. In the finest Leftist and SJW tradition, it would seem that he equivocates lying with telling the truth: 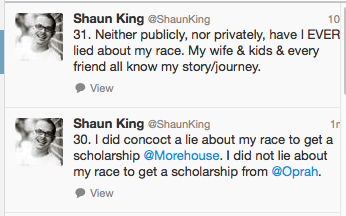 He lied, but never lied. But took a journey. He should take a journey to the loony bin, if you ask me.

Now, the real question is why these White race hustlers are pretending to be Black in the first place. It is a common claim of the Left that we live in a world of White Privilege. This, they tell us, explains why Blacks are poor, more prone to criminal activity, and can’t find a hair-dresser familiar with weaves in the ass-end of North Dakota. In other words, Whites are guilty of something merely by existing.

A fascinating corollary to this is how Leftism borrows so many elements of Christianity, but distorts them to fit the narrative. If a White baby has White privilege, how is this different from the concept of Original Sin? Leftists, I thought that you didn’t like religion? What gives? Stop stealing our toys, if you please.

Anyway, if we consider that Blacks are supposedly having a far rougher time of it because of White people, why would a person choose to pretend to be Black? We can posit two possibilities, both of which may apply here:

1. White privilege doesn’t actually exist, and the programs designed to help Blacks actually give them more than equivalent Whites, incentivizing hustlers to play this particular con.

2. White race hustlers pretending to be Black suffer from some sort of mental illness.

I proposed on Twitter that Vox Day’s law on SJWs, namely that SJWs Always Lie, has a corollary: SJW Lies always fall apart in comic fashion.

And it just keeps getting better. Shaun King cannot answer a simple yes or no question: “are you Black or White?” This is a typical Leftist tactic, and one you see on the more “moderate” Right-wing from time-to-time as well. You ask a simple question, and they simply cannot bring themselves to deliver a simple answer. Lawyerese is followed up by either an off-topic tirade or a speech that effectively cancels itself out, laden with plausible deniability. Mr King’s attempts to dodge the question are absolutely comical. My favorite would be this little gem: 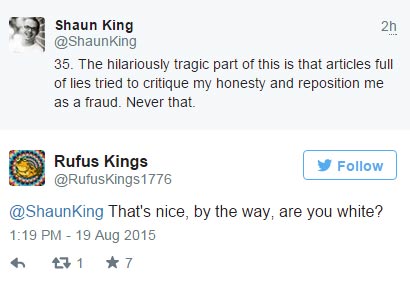 Answer the damn question! Anyway, we already know you are a fraud, so I suppose it doesn’t matter at this point.

Leftists just can’t seem to wrap their minds around the fact that lying, and getting caught in said lie, damages their future credibility. It’s like the story of the Boy Who Cried Wolf went right over their heads. You are a fraud, Mr. King, and we cannot take anything else you say seriously because there is no reason for us to believe it isn’t also a blatant lie. Your time in the public eye as anything but a mockery, a failure, a pathetic excuse for a human being, is done.

Keep hustlin’ Shaun King. Know that we are mocking you.