My post yesterday on the end of Twitter was eerily prophetic. Not long after, Robert Stacy McCain was suspended. And the hashtag #FreeStacy was removed from autocomplete. Vox Day explains this for us.

Twitter was attempting to steer the narrative in subtle ways, by removing specific hashtags from the autocomplete menu, and then furthermore instituting shadowbans. This, naturally, was insufficient. Those not inclined to be politically correct resolved themselves to stay on Twitter anyway, at least until they were banned.

So Twitter decided to begin more direct purges and give up plausible deniability.

This is fascinating because it is an example of Saul Alinsky’s Rules for Radicals played in reverse. Twitter is losing the battle for political correctness. It isn’t winning it, as some may think. Consider the rule in question:

RULE 10: “If you push a negative hard enough, it will push through and become a positive.” Violence from the other side can win the public to your side because the public sympathizes with the underdog.

Banning and censoring is the closest approximation to violence that the Internet has. Sympathy will come to our side because “The Man” is Twitter, not us. We don’t have the power. They do. And they are using that power to deliberately censor us. Somebody fumbled the play from Alinsky’s book. Or maybe they were tired of slow, creeping progress and went for an all-out assault on the walls.

Either way, their impatience has exposed them for the monsters and abusers of power that they are. Their traffic has likewise suffered irreversible damage: 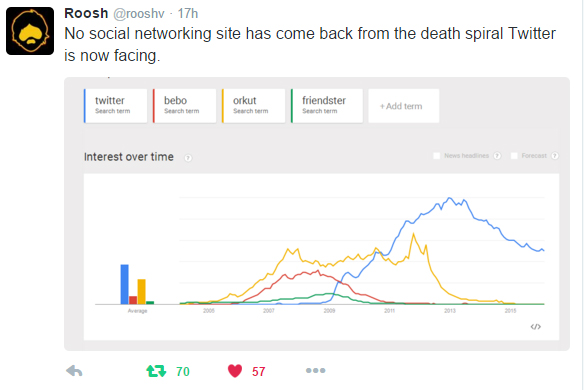 Twitter is done. It has entered a death spiral by deliberately suppressing its own traffic in an effort to purge the politically incorrect. They do not understand the old saying: “don’t cut off your nose to spite your face.”

It is imperative to learn from Twitter’s demise. Do not allow SJWs into your organization. They are agents of subversion. Their only purpose is to destroy. Whatever value you think they may provide will be outweighed by the fact that they will remove you from power, and then burn down whatever it is you have made.