I didn’t realize how quickly the term “Weaponized Empathy” would spread. But I’ve been seeing it pop up all over the Conservative Right the last few days. So in that light, here are a few other examples:

Here we have a sob story about a man who claimed his mother died due to Trump’s travel ban. Turns out, she was dead five days prior to the ban.

Ace of Spades points out that the Left was remarkably silent on the matter of Elian Gonzalez, back during Bill Clinton’s reign. When empathy will not serve Progressive interests, it is ignored.

That’s Elian Gonzalez being ripped from his extended family here in America at gunpoint at the direction of Clinton Attorney General, Janet Reno, after Gonzalez’s mother died helping him escape from the horrors of a Castro-controlled Cuba.

Today, progressives are crying big crocodile tears over a few immigrants getting held up over security checks. Back then? Crickets. Bill Clinton was their boy. So what if some 5 year old got shipped back to a Communist hellhole instead of being allowed to live with loving relatives?

Remember the fake columns of smoke in a Reuters photo of the then-latest Israeli-Palestinian conflict? Classic Weaponized Empathy.

Of course, we have the black church torched after painting “Vote Trump” on the walls, burned by one of the congregation members in a fake hate crime.

A black man has been arrested and charged with burning an African-American church in Greenville, Miss. last month and defacing its outer walls with “Vote Trump” graffiti.

The Mississippi state police arrested Andrew McClinton, 45, on Wednesday and charged him with first-degree arson of a place of worship, Warren Strain, a spokesman with the Mississippi Department of Public Safety told The Daily Caller.

McClinton allegedly set fire to Hopewell Missionary Baptist Church, where he is a member, on Nov. 1, a week before the election.

The demand for hate crimes far outstrips the available supply, so hoaxes are trotted out before the media in an effort to gain more Weaponized Empathy. Don’t support Trump, or else you like seeing black churches burned.

Milo goes to speak at Berkeley, of course, and out come the riots, beatings, and vandalism in the streets. Yet the narrative from people like Sarah Silverman and other celebs and media talking heads, is how good this really is. Because wouldn’t it be great if we could start a military coup now.

So where’s your empathy now? Oh, that’s right, it doesn’t serve a Progressive cause.

Here’s another grand hate crime hoax, wherein it was implied Trump supporters were harassing a woman with homophobic slurs. The campus investigation proved this to be absolutely false.

Here’s a piece where conservative gay man, Peter Thiel, is denounced as being no longer gay because he’s conservative. You can, apparently, have gay sex without being gay. Why did they do this? Well, they wanted to keep their monopoly on Weaponized Empathy. Nobody on the right is to be allowed empathy. The Progressives don’t want to share their toy.

Here’s a further list of recent hate crime hoaxes. Cashing in on Weaponized Empathy is a great game, these days. To the person seeming the most victimized go the spoils.

But given all the hoaxes such folks have perpetrated, we have Cenk Ugyhur telling us that the Milo riots couldn’t possibly be good Leftists. It must be 4chan who did it. This, despite the calls to #TheResistance all over social media, these days, and people like Sarah Silverman calling for military coups that will never happen. No, the recent history of violence and vandalism at Progressive protests is pretty well documented. After all, the inauguration was filled with idiot journalists trying to take Pulitzer prize-winning photographs of burning trashcans.

A commenter named “Skywalker” posted a comment noting the following:

This is a variation on the presidential election and some of the more vocal opponents. Remember the Tess Rafferty Aftermath 2016 video? . She as much said, If you voted for Trump, you’re a racist/sexist. If you voted for Bernie/Jill/Gary, unfriend me. What she DIDN’T say was, The only acceptable vote was for my candidate, Hillary; but through a process of elimination, it’s basically the same thing. This is form of political and sociological bullying.

Vote for my candidate, or you’re a bad person. It’s guilt-tripping Weaponized Empathy deployed as a form of peer pressure. I’ll hate you, unless you do what I say.

Here was a great example of Weaponized Empathy posted by Jason Mart:

Here is an article about the same idea used to weaponize empathy toward the AWNR.

This example is great because it illustrates how Weaponized Empathy can be used on non-human targets. It’s one of the chief weapons in the environmentalist movement’s arsenal. They post pictures that have nothing to do with the place where the drilling will occur. Pristine wilderness, frolicking deer, and bountiful forests… when the proposed site is an ice-filled tundra where pretty much nothing grows.

Here you can see The Atlantic explaining how to deploy Weaponized Empathy as a persuasion technique. Amusingly enough, the Tweet that was the basis of the article appears to have been deleted. Another hoax, perhaps? I don’t know. But it certainly wouldn’t surprise me, at this point.

Here is the New York Times blaming future trans suicides on a nebulous group of supposed haters (implied to be Conservatives). So you don’t even need anything concrete in order to to use the weapon. At least the picture of the child in Syria was legitimately about a dead kid, even if it was used to cynically manipulate people into accepting a political position. Now we are talking about theoretical deaths, not actual deaths. Theoretically, says the Progressive, somebody might kill themselves because you don’t like what they are doing.

And let us not forget the photo of Michael Brown most often circulated by the media, showing a proverbial teddy bear. 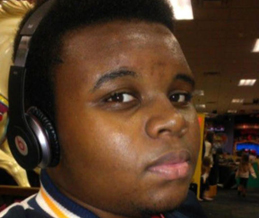 He was a good boy. Just listening to some tunes, ya know? Don’t shoot!

Meanwhile, explicit instruction was given out to not show the video of Michael Brown, a big, burly man, robbing a convenience store earlier on the same day. We’re only permitted to show the nice pictures of such folks, right?

Send me more examples, and I’ll post them here. This tactic must be called out whenever we see it.