Some quick tidbits for today. First of all, check out Tom Kratman’s column: If It’s OK to “Punch a Nazi,” Can It Be Wrong to Hospitalize a Stalinist? He makes some excellent points, but this may be the most important part:

And that’s really the important crime on offer. It’s not damaging property that really counts, here; it’s the suppression of free political speech. The physical assault and battery of Professor Stanger wasn’t just about her and Charles Murray; it was much more an attempt to spread fear of speaking freely to far and near. David Harbour isn’t just inciting to violence from the safe perch of a stage; no, over and above his disgusting virtue signaling, nauseating moral preening, and filthy self-aggrandizement, he’s trying to terrorize into silence – rather, to get others to terrorize into silence – anyone who doesn’t agree with him and his. No need to belabor the point with Falarca and the anti-Milo riots, except to wonder why no one has yet put the tyrant bitch in the hospital or the morgue. O Tempora; o mores!

The Left is conducting a coordinated campaign against free speech, through all means available. They will use government, of course, when they can. But they will use more private means, also.

It must be resisted and countered effectively. When Leftists destroy property and use violence to silence Rightists, defense and retaliation are now on the table. For every Leftist who punches a Rightist, a Biker for Trump ought to pay it forward. If they want to bring the black bloc to protest us, we ought to bring bikers, veterans, and mean-looking rednecks to counter them. If they want to smash our signs, their signs likewise must be smashed. If they want to boycott our businesses, we need to boycott theirs. If they get our people fired, we should ensure their people are fired too.

I don’t like it, and I don’t want to do it. But they won’t even think about stopping this behavior until we make it painful for them.

Otherwise you’re going to get more of this: 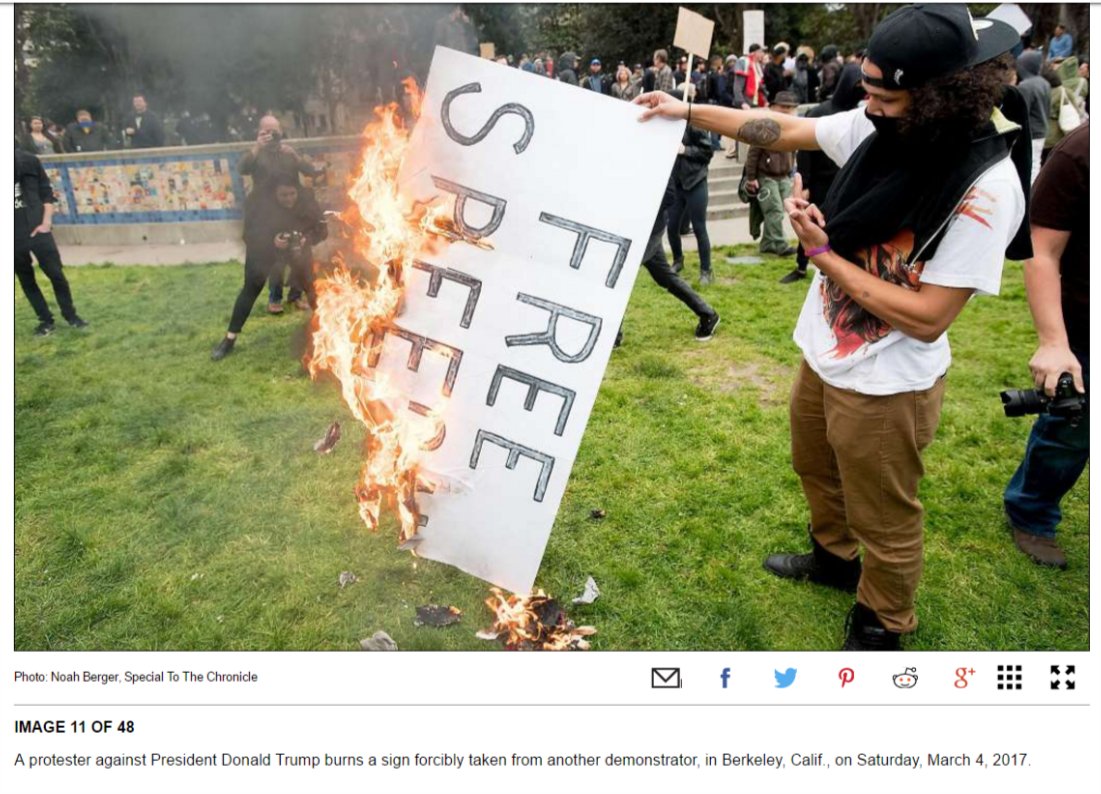 Keep in mind that not only are these cretins trying to suppress freedom of speech, they are also plainly crazy. Many of them are mentally ill. Take a look at this classic case of animus possession:

See the face of the enemy. Know your enemy. Know that she is utterly and completely mental.

At Sarah Hoyt’s place, there’s a comical guest fisking wherein a radical feminist course, designed to heal you from your toxic whiteness, or whatever the hell being white means these days, is torn apart to comic effect. It’s comedy gold and well worth the quick read.

Lastly, Francis explains to us the knife’s edge upon which American electoral politics is still perched. Trump’s win was a landslide from an electoral perspective, but only because the Democrat coalition fell apart. The Shudra class defected to the GOP after decades of being the butt-monkey of the Democrats. That allowed Trump to build a winning coalition in the electoral system. But even so, the concentration of Democrat power on the two coasts remains a significant threat. It is possible that they still possess an outright, if too-concentrated, majority. Meanwhile, politics in America threatens to Balkanize along racial lines.

Trump may have pulled a hail Mary pass and won a hard-fought battle, but the war continues, and the enemy grows increasingly desperate.

Think about what these four seemingly unrelated items tell you. First, the hard Left wants to silence you completely, second, the hard Left is crazy, as in completely mental. Third, there is no position too insane, no stance too loony, to stop them. And lastly, America is rapidly fracturing along its demographic cracks, as all factions within it grow increasingly desperate, seeing this as a battle not of ideological preference, but of survival.

This is a recipe for Civil War, folks. Tread lightly.