I read things like this and note that nowhere does the marketing campaign, the article, or the company itself talk about the taste of the beer, or how the beer is different from other beers. 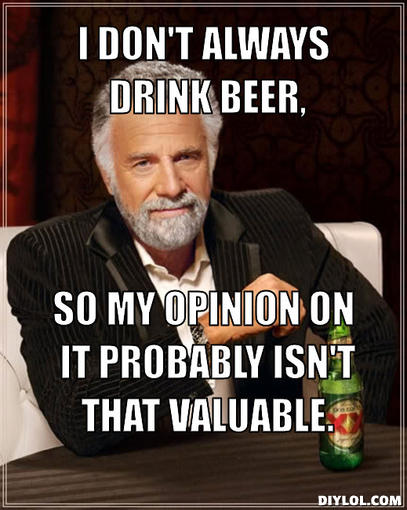 To be fair, the ad campaign was clever, funny, and entertaining. But why is the advertising more important than the product itself?

No. They talk only about “bringing people to the franchise” and “growing the brand awareness.” Marketing has divorced itself from the product so much that the product itself doesn’t matter at all. The Most Interesting Man Alive could have been selling us Steel Reserve, and nobody would have cared.

“We’re viewing this as an opportunity to bring new users along with us,” Katz says. “To bring younger drinkers into the franchise who can better relate to a different Most Interesting Man in the World.”

Again, no mention of the beer’s taste, or quality, how it’s made or what makes it different from another beer on the shelf of your local grocery store. The only thing that matters, when it comes to expanding your product’s appeal, is franchising and marketing. Fluff over substance.

I don’t like what this means for Western civilization as a whole. Packaging has greater appeal than substance. I wonder if, when all is said and done, the marketing and advertising cost more than the product’s manufacturing itself?

Or, in another analogy, consider the Puppy Monkey Baby advertisement in this year’s Super Bowl. What in the Hell did that have to do with anything at all?

But I bet it sold Mountain Dew products anyway.

Idiocracy’s Brawndo the Thirst Mutilator ads made about as much sense: