Leftist Denial: On Islam and Socialism

Islam has been the darling child of the Left since I was a child. I would see adults on television clamoring to excuse Islam for this or that atrocity. There were good Muslims, we were told, and somehow Christians had wronged them all throughout history. It was always Christians doing the wrong, you see. The Soviet invasion of Afghanistan is conveniently forgotten by the Left. The centuries of conflict between Hindus and Muslims is more or less whitewashed and, somehow, probably the fault of Christians anyway.

Can you imagine how confusing this might be to a child? My Armenian grandfather would tell me one thing, and the television would spout off something entirely different. I knew my Grandfather, he was a good, honest, and righteous man. He was also nobody’s fool. Despite the protestations of the media, the actions of the Muslim world lined up squarely with the worldview of my Grandfather.

In simple terms, reality was with my Grandfather, and the mutterings of the media were either a form of willful blindness and ignorance, or an outright lie. Even at the age of ten, I was able to see this and decide which was more likely to be the truth. If a ten year old could do it, why not fully grown, educated adults? The old saying “actions speak louder than words” applies.

If actions speak louder than words, what do you think radical Muslims are telling us here?

Of course, it goes further. Socialism has been tried in many forms, from the Authoritarian, International model of the Soviets, to the Nationalistic, Xenophobic form of the Nazis. In each case, it has failed, and the death toll from this philosophy has reached the millions. Yet, again and again, we are told that Socialism is morally superior, that more equality is needed, and that it must come from the State, from taxation and redistribution.

More modern interpretations of it are softer, for we must at least give the Socialists credit for trying something slightly different with the Nordic idea. But, that too, appears to suffer a critical weakness: demography. The Nordic peoples are slowly giving way to their Islamic immigrants. It appears that the velvet glove variant of Socialism requires an ever-greater number of immigrants to sustain it, and at the same time, has had the effect of numbing the native population and dropping birth rates precipitously.

Children are difficult and expensive in any era, but it used to be that your hope for retirement and care of the family lay with your children. Before the days of Social Security, for instance, your son was probably your retirement plan. When you got too old to work, you would stay with him and, perhaps, help to look after the grand kids. Socialism destroyed one of the primary motivations to have a family. And also, the subsidy of birth control in many of these countries has contributed to this problem as well. Add to this the new strain of militant feminism and its hostility toward men, and you begin to see how Socialism can destroy the family and, in turn, destroy the nation’s ability to propagate itself.

In any event, children are seen as a major burden in the West, but not among the Islamic immigrants. Crime rates in Muslim-settled areas have gone up significantly as they import more people from violent parts of the world. As the native birthrates drop, the Muslim immigrant birthrates are far higher. Yet the Left doesn’t even seem concerned about this. This is repeated across Europe, as opposing mass immigration has become linked to racism, Nazism, etc… Debate on this subject gets shut down quickly and effectively by screaming rhetoric as loudly and obnoxiously as possible.

Mark Steyn makes the argument far more effectively than I can.

At this rate, in a century there will still be a place called Sweden, or even a country called Britain. But they will be Muslim countries, by and large, and the civilization which we know as the West will be gone. The alternative possibility, of course, is that native Westerners wake up to this phenomenon and turn violent and genocidal themselves. After all, Europe has some seriously dark history in this regard.

The Left assures us that this isn’t true. But, again, their actions speak louder than words. They import as many people as possible from the Third World, and especially from Muslim countries. At the same time, they push a narrative of White guilt to prevent any outcry. In effect, the Left desires to replace its native populations (whatever they are) with Muslims. Islam, of course, is a religion utterly incompatible with the Leftist notions of LBGT rights, freedom from religion, sexual liberation, feminism, etc…

They are, in effect, destroying themselves, but ensuring that we on the Right will be defeated first. Like the suicide bombers in the Muslim world, they are annihilating themselves in the effort to take their ancient enemy with them.

Again, I’m ignoring what the Left says they are doing, and instead noting the actions. Donald Trump’s surge in popularity is partly explained by a backlash against this. And what is he really saying he wants to do? Build a wall and deport illegals. That’s it. And yet this is viewed as controversy, as racism, as outright Nazism, by some. Those who ask for peaceful solutions to this problem, like myself, may very well be replaced with people who demand violent solutions. Yet this possibility, too, is ignored by the Left. If they cared at all for the Mexicans and the Muslims, they would consider their actions very carefully. This tells you that the Left doesn’t want America to control immigration. It wants the maximum amount of Third World immigration humanly possible at absolutely any cost, including war and genocide.

It wants to replace you, the existing Americans, with new and different Third World Americans. Mexico is closer, and so they concentrate on them, but don’t mistake the desire to import as many Muslims as they can, as well. Obama’s administration is telling us that 10,000 new Muslim immigrants is not enough. We need more.

Consider this in incredibly simple terms: Muslims come to America and blow up a bunch of buildings, killing thousands of people, and the Left’s reaction is to import as many of them as they possibly can. Ignore what they say, watch what they DO. They WANT more terrorist attacks, people. 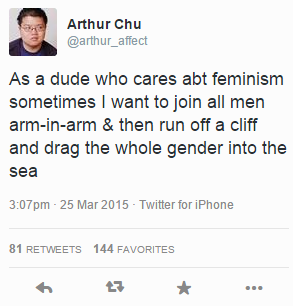 His fantasy is to wipe out his own gender.

Some Leftists overtly cry out for genocide but we are the bad guys. Yes, I know these are their extremists, the worst of the worst on the Left. At the same time, for every one of these people who admits their genocidal inclinations, there are many more who lie about them and say “but all we want is equality.” Right. I’m the f*cking Easter Bunny, too.

The #BlackLivesMatter hashtag, the Baltimore and Ferguson riots, the uptick in police officer assassinations are all symptoms of a nation in deep ethnic turmoil. President Obama has done nothing but pour fuel on this fire, attempting to spark violent revolution. Attempts to unify people with hashtags like #AllLivesMatter are spurned, because to the Left, if you’re a Right winger, your life categorically does not matter.

Again, ignore what Obama says, and watch what he does. I.e., nothing. Ferguson and Baltimore burn, and all he can manage is to spout off some platitudes about his theoretical, non-existent son looking like Mike Brown. Again, two conclusions are possible. One, he is such an idiot, so incredibly stupid, that he doesn’t see the danger in these riots and assassinations or two, he is fully aware and intends for them to happen.

Fortunately, nothing has snowballed into an avalanche yet, but the Left stirs this pot as much as they can, undoubtedly hoping for the day that some kind of insane ethnic violence is sparked. I cannot attribute this lunacy of throwing hundreds of thousands, even millions of Islamic immigrants into places where Islamic terror has struck many times in recent memory to anything but outright malice.

It’s time to face the truth: the Left wants terrorism. The Left wants ethnic and religious violence. The Left wants to replace the populations in Western nations because they believe the West is evil and must be destroyed at all costs — even their own survival. The immigrants will vote Left wing, at least for now, because they know where their gravy train comes from. So the Left can use them to win their war on the Right.

Think I’m wrong? Ask yourself this question. Take a prominent Leftist and give that person the power to let in as many immigrants as they wish to any country in the world that they wish. How many would they let in?

They would let in all of them, or at least every single one that wanted to go or could possibly be convinced to go. They foisted 800,000 Muslims on Germany only because they realized they could not foist 2 million on them. They don’t want border security in America because as far as they are concerned, it is a travesty that the entire population of Mexico cannot freely immigrate to the United States whenever they want to, as it is. If there is a problem with illegals in America, they will tell you, it is that there are not enough of them. “The Jobs Americans Won’t Do.” That’s the war cry, demanding more illegals. Ironically, they are half-right. There are 100 million able-bodied Americans who don’t work. So the only reason Americans won’t do those jobs, it seems, is because they don’t want to do anything.

Sometimes I wonder if they realized, deep down, that Socialism was never going to work, that it ultimately led either to mass murder and tyranny, or to the slow (but relatively comfortable) death of Europe today. But they figured if their time in history had come, they sure as well weren’t going to let us survive either. But, yeah, I’m reaching there.

What I do know, by careful application of Occam’s Razor and by watching the actions of the Left and those of the Islamic world, is that they are both deliberately attempting to destroy the West. This is not speculation, this is not conspiracy theory, this is truth.

I just hate that it’s come to this, you know? My own family escapes Islam, and here it is again, still promoting violence, only this time they demand entrance into the place my family has fled to. And the Left continually enables them, acting as their very own fifth column.

I can’t turn my eyes from it anymore. The Left and militant Islam wants the West destroyed, and I don’t give a flying fuck what names they call me any more. I oppose this. There is no compromise to be had with those who do not concede your right to EXIST.

And as a head’s up, Francis at Bastion of Liberty tells us what each us should be doing in this new world. Read it. Learn it. Live it.