Leftism Has Gone Into OverDrive

It amazes me how quickly Leftism is able to conquer new territory when the media paves the way for their offensive. Previously, I discussed how the Confederate Flag assault was used as a convenient way to avoid discussing the TPP bill. But now the attack on that flag has grown to epic proportions.

Amazon, Ebay, Walmart and other major retailers have thrown it off their shelves. Note that you can still buy Nazi flags from many of these fine establishments, but the Confederate flag is considered a bridge too far. The General Lee from the Dukes of Hazzard has lost its iconic flag as well. Now, normally I wouldn’t concern myself overmuch with the goings-on of the marketplace. One may choose to sell an item or not, as they please. Yet, the demand for these flags has only gone up in recent days. The retailers are directly ignoring profit motive in an effort to comply with the dictates of the Left. Corporate America has gone Full Retard. 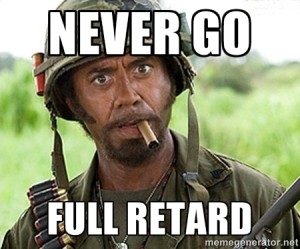 I cannot say this surprises me overmuch. We’ve known for a long time that Corporate American has been in cahoots with the Left and the Government, despite appearances to the contrary. Rather, what’s surprising is the swiftness of its action. In a matter of weeks, this flag has gone from a minor annoyance among Progressives to a full-scale mobilization, in which not only is the Confederate flag being attacked, but the American flag as well.

This issue is, itself, a minor thing. I do not own any Confederate flags, and I don’t think many of my readers do either. But understand what this effort means. It is much like the Spanish Civil War: a mobilization test for the enemy. The Left is flexing its muscles in order to see how rapidly it can conquer the remaining Bastions of Liberty (sorry for the pun, Francis). It has chosen a relatively insignificant, low-risk target for its first run. But if this effort succeeds, you will see the outrage bandwagon reach much further. The First Amendment may not survive this altercation.

But it is the Second Amendment that worries me most. In 1996, Australia reflexively banned firearms, for the most part, following the wake of a mass shooting. So far, staunch resistance has slowed, and even halted, Leftist progress on this front in America. But if they can take the Confederate flag from the country boys, how much more difficult will it be to conquer firearms from them using similar rhetoric?

Understand this: we are approaching the phase in which the Left thinks it has achieved victory. In the minds of Progressives, the final strongholds of Conservatism are mop-up operations, and can now be conducted with impunity. They are, more and more, coming out from behind the shadows and operating in the light. They aren’t bothering with the Fabian Socialist model that has slowly gained ground in America since the 19th century. They are ready for their revolution. Or, rather, they have already achieved it and are waiting to see our revolution. They will continue to push, faster and faster, until either they meet significant resistance or until their victory is total.

This means that the political phase of this conflict is rapidly coming to an end.

Remember that war is the continuation of politics by other means.