Poking fun at the farcical antics of John Scalzi is normally someone else’s bit, but this last post of his on Whatever just begs for a thorough deconstruction. This quasi-socialist, vaguely male author has written considerable drivel over the years, but this one is particularly inane.

(“SJW” here is shorthand for “Social Justice Warriors,” a term which is new to me but  which is defined over at the Urban Dictionary, where it is not generally considered a very polite term.)

Let me guess, this idiotic male feminist (but I repeat myself) is going to “own” this term. John Scalzi, Social Justice Warrior, crusading for all the castrated, left-leaning gamma rabbits. Does he have a business card? If so, I will happily drop it in the contest jar for the local dressmaker so he can duplicate his sacrifice of “male privilege” in front of the entire Internet for a second time.

I actually get this a lot, although usually in even less polite terms than this. I’ve got a healthy stack of e-mails from various dudebros that, once you’ve wiped the spittle from them, say something along the line of “one day all those feminists and gays are going to SET YOU ON FIRE and you’ll come crawling back to us and WE’LL LAUGH AT YOU LIKE THE GAMMA RABBIT YOU ARE.” This is then followed by comparisons to Hugo Schwyzer and/or simply more spittle. 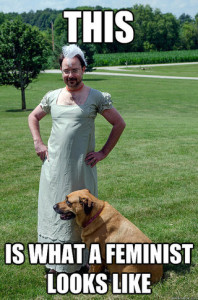 It could only be made better if he were a transsexual wearing a redshirt trekkie uniform.

At least Hugo Schwyzer located his penis eventually. Granted, he used the thing to plow feminist sluts (but I repeat myself), which I find rather detestable, but that is still an accomplishment of sorts. The resulting self-destruction was amusing, at least, where Scalzi’s life has something of a more tragic feel to it. But Mr. Scalzi does raise one good point. It is entirely possible the feminists will never bother to destroy him. After all, his blog’s audience is somewhat… lacking. Not that mine is any better, but at least nobody here claims 50,000 pageviews and then fails to achieve even 1/10 of that number. He should thank Mr. Beale for the extra traffic from all of us “dudebros.”

1. Dude, if I ever act like Hugo Schwyzer, feminists screaming for my head is the very leastbad thing that should happen to me.

For this to happen, Mr. Scalzi would first need to actually seduce something vaguely female. Perhaps he can get in touch with his feminine side, sport another dress and go cunt-surfing at the local transsexual dive bar.

2. There are plenty of people, including feminists, LGBTfolk and minorities, who are already exasperated with me for various reasons, nor are they entirely unjustified for being so. I get a lot of attention for speaking my mind about issues of importance to them, which is nice for me but often means a)that I get spotlighted for piggybacking on work other people have done, to which I’ve added minimal additional work, b) these other folks are frustrated because my understanding of issues they feel are important is often superficial or tangential to what they see as more critical.

In other words, John Scalzi is a white male, and he will always be white and at least vaguely male. The inner sanctums of Victim Culture will forever be out of reach. But he can at least criticize himself and achieve a modicum of self-victimization.

3. And, you know what, one day I’ll opine about something regarding some marginalized group, make an ass of myself doing so, and then the Internet will fall on my head for it. Why do I know this? Because it’s happened before, and as much as I like to think I learn and grow from making an ass of myself, sometimes despite your best intentions you find new and exciting ways to make to put your head into your rectum, previously unknown to human kind. I’m going to try to avoid doing it. But I don’t imagine I’ll be perfect on that score.

So you are agreeing with Vox, then? Anyway, if his head did find itself somewhere deep within his rectum, it would be doubtful he could find his way out again. Anyway, we all know that white men are allowed in the circles of feminism with a certain amount of latent hostility and suspicion. Sooner or later he will be ostracized, whether or not his brain somehow finds itself in his ass.

I do understand that some people think apologies and acceptance of criticism means you’ve lost, and your gonads shrink and that children will throw rocks at you, or whatever. But these people are, to put it politely, stupid.

When you apologize to socialist, feminist shitstains who demand your testicles as a sacrifice before you will be accepted back into the Gamma Rabbit herd… yes, that is a loss. I legitimately feel some sympathy for Mr. Scalzi here, because he was never properly introduced to the concept of masculinity. Among men, an apology is an admission of defeat, failure and of loss. But that doesn’t have to be damning either.  That is one of the greatest flaws of Rabbit culture, of these feminized men. They don’t understand that recognizing losses is of critical importance.

Everyone loses at some point in their lives. There’s always a bigger fish. But recognizing the defeat and striving to overcome it the next time allows one to become stronger. Sometimes I suspect that this is the source of Socialism’s appeal to these people. Theoretical Socialism removes the winners and losers from society — it removes the entire concept of victory and defeat. In so doing it reduces everyone to the status of Loser simply because losing is, in simple terms, the absence of victory.

4. Aside from anything else, this fellow seems to be making the assumption that all the people he’d classify as “Social Justice Warriors” are a hive mind, and will one day turn on me en masse, because, I guess, it was just my time. Allow me to suggest I am skeptical of this formulation, on several levels.

But, on the other hand, if every “Social Justice Warrior” out there on the Internet dropped on my head all at the same time, might it not be possible that they are doing it for an actual reason, and not just because they all got a message from SJW Headquarters that now it was time to devour my soul? I do know a lot of people I’m guessing this fellow would consider “SJW.” Strangely enough, in experience of them, they are not all walking in reflexively angry lockstep. They actually have their own brains and interests and motivations. So if they all suddenly aligned against me, it might be — might be, mind you — that I have indeed done some monumental fuck up. And that maybe I ought to pay attention to why they’ve all suddenly turned on me.

Internet meme culture is a strangely hive-like thing, Mr. Scalzi would do well to remember that. These people don’t take marching orders from anyone, really. They are a mob of like-minded people who move like a herd. When the herd is coming your way, there is very little you can do to redirect its wrath. It could very well be that one has done something monumentally and legitimately stupid to attract the ire of the herd. Or it could be as random as a funny-looking photo that interests them. Like moths to the flame they will come. The rabbit herd is cruel and merciless in a way no honorable man could manage.

But I don’t hate Mr. Scalzi, no more than Vox or members of the Dread Ilk do. Leftoid male feminists are objects of pity, not scorn, made all the more pitiable by the fact they don’t even realize they are broken.