I’m so tired of apologetics for Islam. No more. We all know the rational reasons for opposition to the ideology. The expression of terrorism is so much more common in that world. It has resisted the progression of technology and science. In a more visceral manner, it has thrown gays off of buildings and beheaded Christian children. The ideology is poison. But, for me, it is worse than that. Consider this rhetoric, if you wish, but it is also truth.

For me, my heritage and connection to the Middle East is strange. My brother and I come from the same gene pool. Yet for him, if he bothers to think of his Armenian ancestry, it is only for the briefest of moments. He doesn’t even look the part, whereas somehow I do. The lottery of genetics is funny that way. You can tell we are brothers, but somehow he looks straight-up Anglo-Saxon, and I could pass for fully Armenian if I really wanted to.

It is that way for remembrance of it, as well. My grandfather was very old when I was born, and he died when I was only 12. My brother was too young to know him at all, but I remembered. Through his stories, I felt like I had almost been there myself. They spawned a lifelong obsession with the old Byzantine world that, even in the twilight days of the Ottoman Empire, still lay underneath that world.

The Turks, you see, had borrowed the architecture and forms of that older civilization. In those days, Greeks, Armenians, Lebanese Christians, Copts and Syrian Christians were still common enough. They were, in their own way, the remains of that ancient Byzantine world. Everything from that era fascinates me. I wish I could walks the halls of the Hagia Sophia, as my own ancestors did. 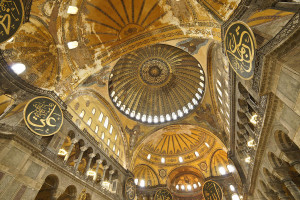 A place my ancestors had seen, once. Christianity’s greatest monument, built 1500 years ago, has been in the hands of the Turks for over 500 years now.

But in its final death throes, the Ottoman Empire broke apart and cast out as many Christians as it could, some through murder, others through exile. It is a process that has continued to this day, with ISIS cleansing the remaining Syrian Christians. It’s a thing that has continued for over a thousand years, and will not end until, for all of those people who survive, it is nothing more than a dim cultural memory. It will be chaff in the wind.

Islam erases people, religion, culture, and history wherever it goes. Everything is replaced with the Muslim faith, governance, and law. And unlike the assimilation once practiced in America, it does not borrow from those it takes in, it does not stir them into a pot and say “from this, we will make something better.” It annihilates them, erasing even their memory. The monuments are destroyed or plastered over, the people slaughtered, the great works lost.

The world my grandfather told me of no longer exists. It hasn’t existed for nearly a century, now. And the tiniest fragments of it, the last bastions of its descendants, are being annihilated as I write this. Children, decapitated for daring to live on in the land of their ancestors, without converting to Islam and forgetting everything that makes them who they are.

What does the West do, now? Do we fight them? Do we plan battle with the enemy who wants to erase us from history? Apparently not, for today the paladins of Social Justice are far more worried about Britishers wearing sombreros. That is the thing they view as culturally damaging. The erasure of entire peoples, cultures, and civilizations is irrelevant to them.

Worse, they invite the perpetrators into their own countries in mass numbers, to eventually erase them, also. They subsize their own conquest and erasure.

At least some of us in the West remember what was destroyed. There will be no one to remember us if we fall. It will be as if we never existed.

Am I exaggerating? Not in the slightest. This is the character of Islam. This is what it does, who it is. It a giant eraser poised over the books of history.