Something that has irritated me somewhat in the last few years is precisely how many people crawl out of the woodwork whenever Islam is criticized or spoken of unfavorably. Excuses are made for the happenings in the Muslim world. Blame is heaped upon “Christian Crusaders” as if the failed attempts at reconquest centuries ago have any real relevance to what Islam does today. America, naturally, is criticized because it desires oil (what’s wrong with that, I wonder?), or because it interferes with the actions of Muslims dictators and theocrats, neither of which are particularly good or nice people.

Leftists decry “White Privilege” and suggest that the deficiencies of the Muslim world are because of White racism. That Islam is not is a race, and disliking it has nothing to do with racism, is lost upon them. I have, myself, been accused of racism against those of Middle Eastern descent. Naturally, such people are often surprised to learn that I am, myself, of Middle Eastern ancestry. The homeland of my grandfather has been a constant site of warfare against Islam for nearly 1,400 years. No, Leftists, this is not a racial issue. Rather, it’s much greater. It is a clash of civilizations, or more appropriately, a clash of civilization against semi-civilized barbarism. Or, are the things ISIS does in the service of restoring the Caliphate describable as anything but barbarism?

John C. Wright recently mused on the nature of the conflict, and reading the comments section was enlightening, for so many individuals were convinced that Mr. Wright was wrong, or perhaps even prejudiced, for daring to suggest that Islam is a backward belief system, and has been a force against civilization and enlightenment since the beginning. Whether he knows it or not, he actually quotes a lot of material from Emmet Scott’s book Mohammed and Charlemagne Revisited, namely that the Islamic Golden Age was a myth, and that it consumed preexisting Western and Zoroastrian Persian cultures. That process, of course, would later be repeated with the Ottoman consumption of Byzantium. For all of Western history since the rise of Islam, it has been at the forefront of a global war against us, with only a brief respite, as John C. Wright explains:

“So history teaches that the Mohammedans are relentless, and merciless, and that they have tortured, enslaved, defeated and humiliated Christians again and again and again, with only a brief respite between Lepanto and the Cold War. With the Fall of the Soviet Union, they emerge again.”

There is a reason, after all, that the Industrial revolution, high technology, and economic dominance did not come from the Muslim world, even though the Ottoman Empire was, for a time, far stronger than most of Europe. Islam contains, at its core, a philosophy that can be summed up in a catchphrase used by many Muslims: “Insha’Allah.” This means “God Wills” or, rather “as Allah Wills.” The intellectual curiosity necessary for a civilization to pull itself out of the Medieval Age is missing in Islam. Things happen because God Wills them. Essentially, Islam denies the fundamental notion of Free Will. The religion is very Fatalist.

When infidels suffer great losses to Islam, when the Twin Towers fell, when the Boston Bombing happened, or when the Charlie Hebdo massacre occurred, many Muslims cheered, feeling that the unbelievers were getting their just desserts from a vengeful Allah, at the hands of warriors for God. Muslim apologists are wont to discuss the Crusades are any available opportunity, while ignoring the Jihad going on today, right in front of their very eyes. It is a curious form of doublethink.

How soon this was forgotten. Christians endure the “art” of crucifixes in jars of piss, and the criticisms of Atheists all day. Muslims can’t take a cartoon joke.

Naturally, I would expect Muslims to take issue with this notion. Their self-interest compels them to defend their ideology. But what is fascinating is how many non-Muslims are to be found in the ranks of its defenders. In fact, when Richard Dawkins, a prominent Atheist with Leftist sympathies, declared that Islam needed a Feminist revolution (presumably to help with their atrocious human rights record where women are concerned), he was shouted down by his own Leftist compatriots. Certainly, Richard Dawkins, no Conservative Christian, wouldn’t be bringing up this problem of women’s rights in Muslim countries if they were paragons of proper behavior.

Sally Kohn wants everybody to know that Conservative Christians are just as terrible as Islam where women are concerned. Right. Because Conservative Christians are committing honor killings, throwing acid in the faces of rape victims, and don’t allow women to drive automobiles. Got it. If she is representative of a typical Muslim apologist, then they must be terminally stupid.

In any event, the radicalization of Muslims living in the West appears to be on the rise. Islam as a religion is a strong wall against cultural assimilation. Indeed, some Leftists demand that the West ought to assimilate to Islamic cultural norms! Ben Carson was not wrong when he suggested that it would be difficult for a Muslim to be President, because Sharia Law and American Law are not compatible. The media trashed him for this, but in my opinion, it was one of the most intelligent things he’s said during his political campaign.

Even here are The Declination, we have merkur, our resident Muslim apologist, who in previous threads has repeatedly attempted to deflect the possibility that Muslim migrants commit more rapes than the native populations in their host countries. I don’t know if he’s a Muslim, or just another Leftist enamored with them, but the phenomenon is nonetheless fascinating. Indeed, the United Nations itself has dedicated itself to the Islamic cause, ensuring that as many Muslims as possible move into Europe. The fact that Muslims have their own countries, and have made a mess of many of them, doesn’t seem to cross the minds of the Muslim apologists. 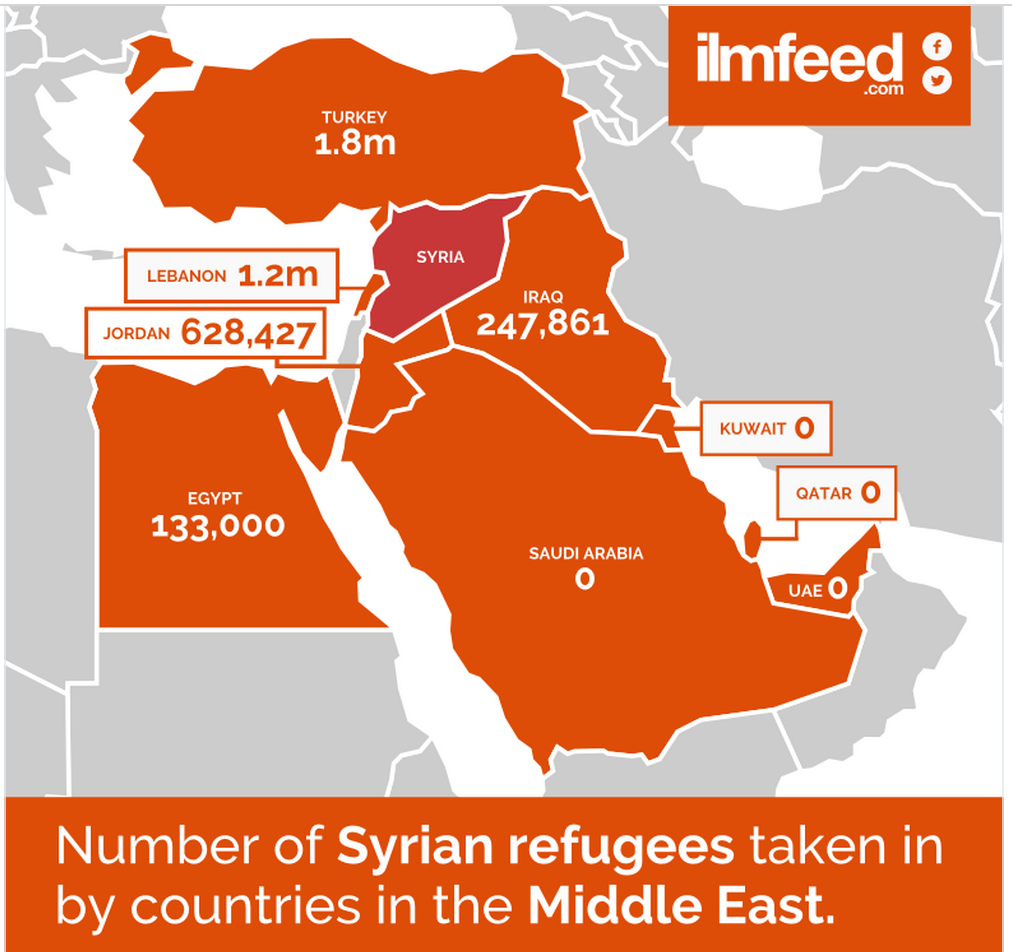 Merkur pointed out that I had misidentified the Muslim countries that had taken in zero refugees. Yet, it remains that Saudi Arabia, Kuwait (who owes us big time, right?), Qatar and the UAE have done nothing. They expect that we should fix the problem for them and foot the bill.

Why are they not going to Saudi Arabia, or Iran? Why is it the responsibility of the West to replace its own population with Muslims? We know that Muslims themselves say that, but why do Leftists support this? How many Muslims are enough? 25%? 50%? The whole population? Muslim apologists, this is a serious question. Tell me how many is enough, at what percentage you would cease Muslim immigration to a country, if any at all.

They have their own wealth, in the form of oil revenues, their own lands, their own support systems, populations, religious leaders and otherwise. They have Muslim organizations like CAIR dedicated to their cause. Why then do we need an army of Leftist apologists? Indeed, what do the apologists get out of it?

Muslim apologists, this guy has said enough for both of you. And Ben Carson gets called stupid because he suggests that folks like this might not be good candidates for running a non-Muslim country?

It fascinates me that Progressives would give so much to proponents of an ideology who would kill them if they thought they could get away with it. Indeed, in Muslim lands, lobbing gays off of buildings is no big deal. Blaming women for their own rape is par for the course. Their religious tolerance is a joke even in the best of times, and justification for genocide and mass-murder in the worst times.

A Muslim apologist might claim that is merely a symptom of my own religious hatred and intolerance, but my readers will note how I do not rant on the doings of Hindus, or the philosophical inclinations of Buddhists. There is one major religion on this planet that simply cannot abide the others. Nor is this a matter of race, for my own ancestors are of similar genetic stock as the Iranians, and I have suggested on multiple occasions that the West should consider taking in the Christian refugees from Syria, the few that haven’t yet been butchered, anyway.

John C. Wright has one last piece of wisdom to provide us:

And history teaches that we cooperated and collaborated with them. Small wonder our history is not taught: we are ashamed of it.

This cooperation and collaboration continues to this day. There are those Christians who profited from Islam, by selling to them slaves, by selling out their own countries as the semi-legendary Count Julian is said to have done, opening the doors for the Islamic conquest of Visigothic Spain. There were even those Byzantines who foolishly claimed to have preferred the Sultan’s turban to the Pope’s hat. In the West, there is no shortage of Wormtongues to bend the ear of the people to their will.

And today, we call them Muslim Apologists.