The American dream is already dead. It died some time ago, though it’s difficult to pinpoint exactly when. It’s a cultural memory, now, that survives as a reflexive answer to everyone’s question about purpose. It’s a tired old joke that long ago ceased to amuse. But, like The Aristocrats, it soldiers on as a worn, ancient trope. Soon, even that will fade. As a child I often wondered what the Romans felt like, as their old empire slowly fell away beneath their feet, dying over the course of generations. Did they see it as we do now? 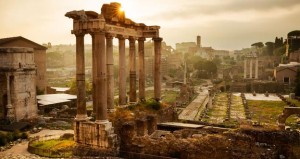 Today, I wonder what the medievalists thought as they walked through the grandiose ruins of a civilization greater than their own. They say that the Forum Romanum became a cattle pasture. Imagine that for a moment, lazily grazing your cows beneath Arch of Septimius Severus, grinding grain in view of the Curia Julia, where triumphant victors once rode into through the city, where the Senators lined the streets discussing great matters of State. It must have been profoundly depressing to know what came before you was so much greater. Or maybe, like today’s enemies of civilization, they just didn’t care.

We’re not there just yet, but how soon until it happens to us? Imagine the cattle grazing beneath the Gateway Arch. Imagine the swamp reclaiming the National Mall, the reflecting pool full of filth and refuse. Consider, then, the White House as a nesting ground for birds.

Chuck Palanuihk put it best, in his seminal work, Fight Club. Although, I suspect he was eager for the approaching fall instead of mourning its inevitability:

“Imagine,” Tyler said, “stalking elk past department store windows and stinking racks of beautiful rotting dresses and tuxedos on hangers; you’ll wear leather clothes that will last you the rest of your life, and you’ll climb the wrist-thick kudzu vines that wrap the Sears Tower.  Jack and the beanstalk, you’ll climb up through the dripping forest canopy and the air will be so clean you’ll see tiny figures pounding corn and laying strips of venison to dry in the empty car pool lane of an abandoned superhighway stretching eight-lanes-wide and August-hot for a thousand miles.”

I can think of no better epitaph for the coming fall of Western Civilization.